A mother-of-four has revealed how she added an extra bedroom to her house by dividing a large room in two in a DIY project that took just six days to complete.

Amy Harty, 35, lives with her four children, aged 5-11, in a three-bedroom house in Essex.

Prior to lockdown, her seven-year-old daughter shared a room with her two brothers but Amy wanted to give the little girl more space so decided to divide the largest existing bedroom in two.

To achieve the renovation on a budget, she built her own stud wall using pieces of wood from Wickes – and the entire project cost just £140. 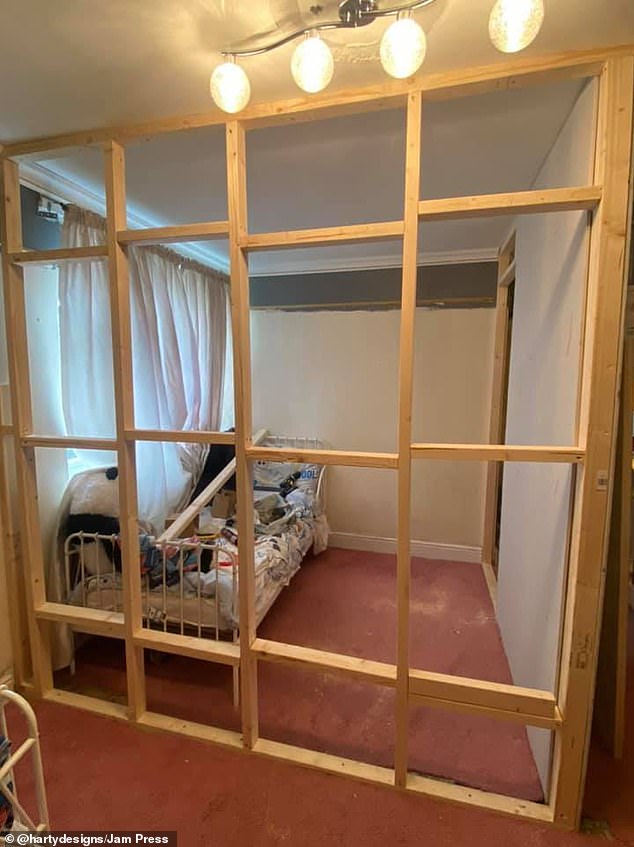 Before: Amy Harty, 35, created an extra room for her daughter in just six days using £3 planks of wood from Wickes to create a stud wall (pictured), dividing a large existing room in two 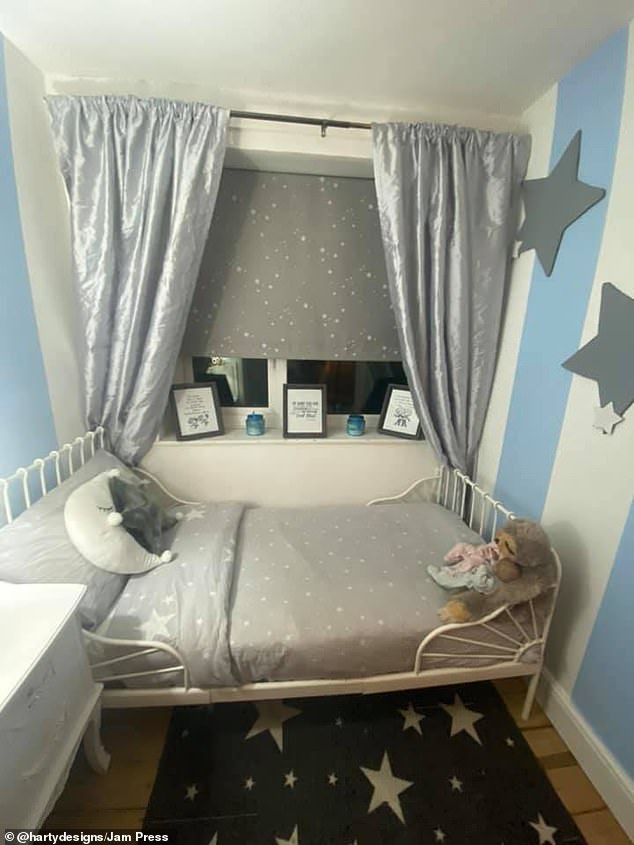 After: The new room is pictured completed and decorated. Her seven-year-old daughter now has her own room for the first time. Her brothers share the other room in the second half

‘Lockdown has been tough with us all being home 24/7, so the need for separate rooms became more necessary now than ever before,’ Amy said.

‘I live in a three-bedroom home, two rooms are doubles and one is a single. My daughter, who is seven, was previously sharing with her two brothers.

‘The third bedroom in our home is also tiny so I decided at the end of January to build a fourth bedroom by dividing the largest room into two rooms using a stud wall.’

Amy is a big fan of DIY projects and was able to complete the fourth bedroom with guidance from her grandfather and the internet, as well as a little help from her children. 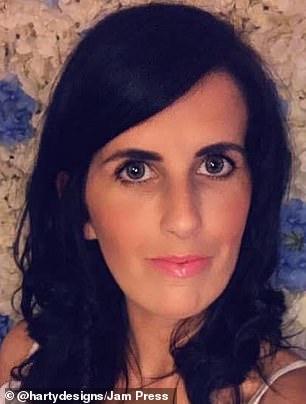 DIY savvy: Amy has four children between the ages of five and 11, with the family living together in a three-bedroom house in Essex

The mother-of-four was furloughed from her job at a local community hall due to the coronavirus pandemic and has been home-schooling her kids in lockdown.

Explaining how she constructed the divider wall, Amy said: ‘I found the joist in the ceiling and screwed the first plank to that, then began building the frame from that.

‘Then I cut the plasterboard to size using a Stanley knife and screwed each sheet to the wooden frame.

‘Finally, I filled any joints and gaps with filler, sanded it all down and painted the walls. I scrubbed the floorboards to save on the cost of new flooring.’

She said her daughter still has to walk through the adjoining room to get to her new bedroom but is thrilled with the results. 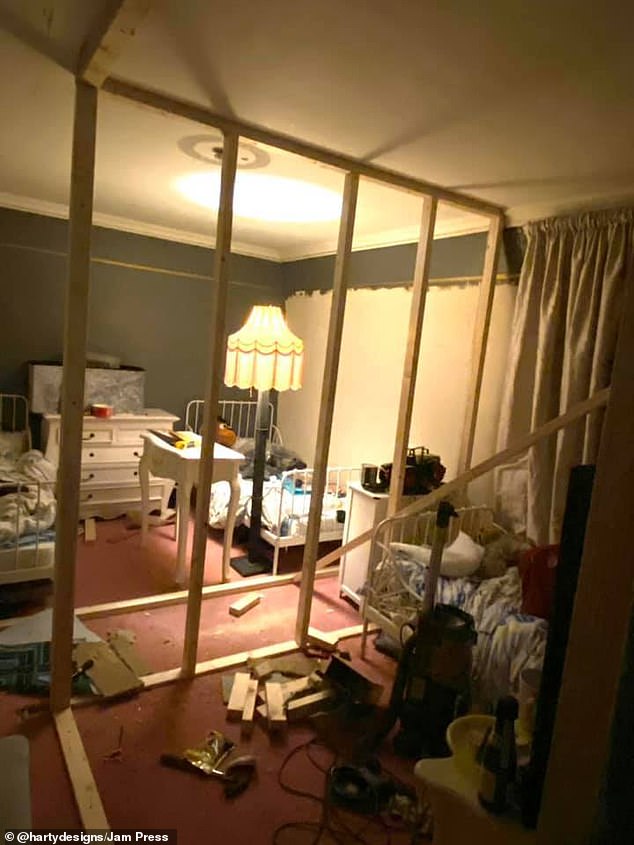 The room is pictured here at the beginning of the process. First she put the planks of wood up to create the stud wall before filling them in with the plasterboard 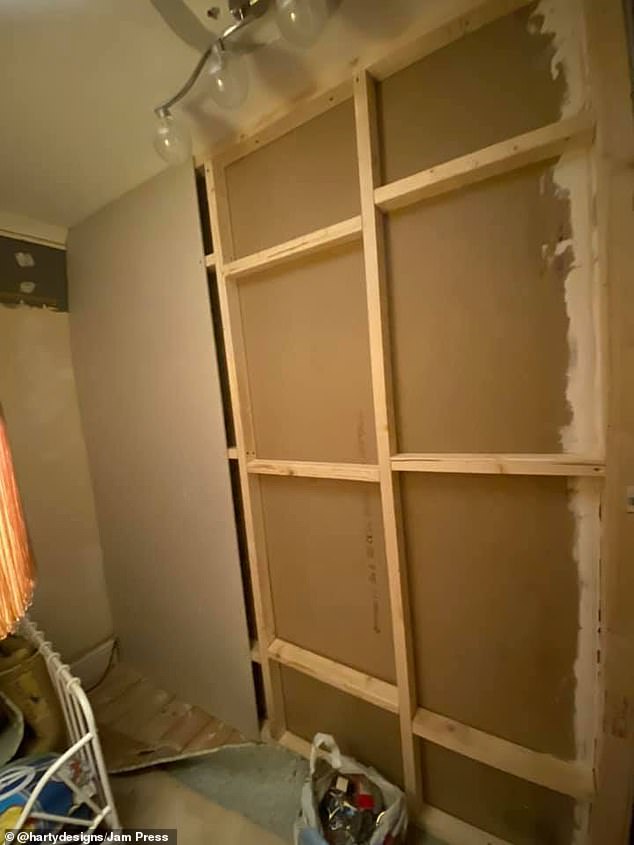 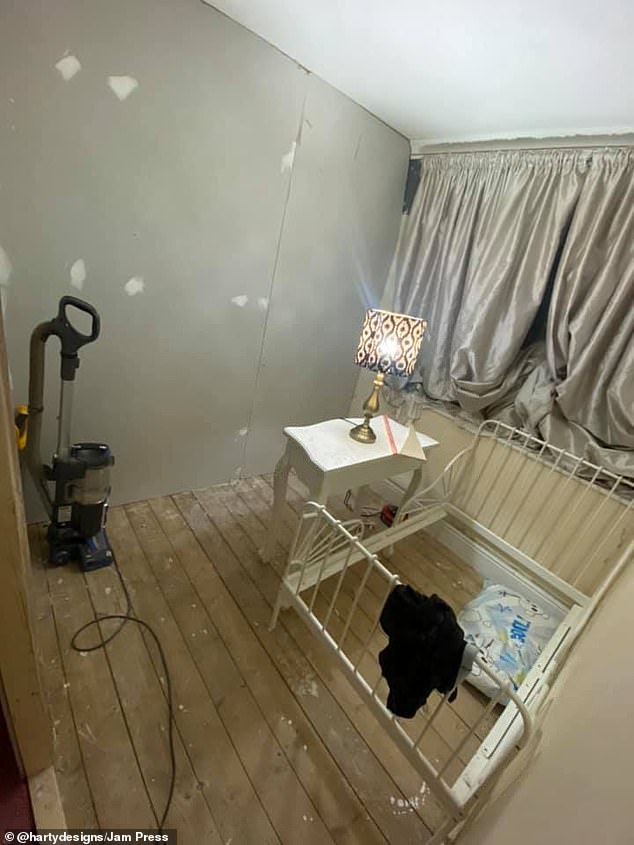 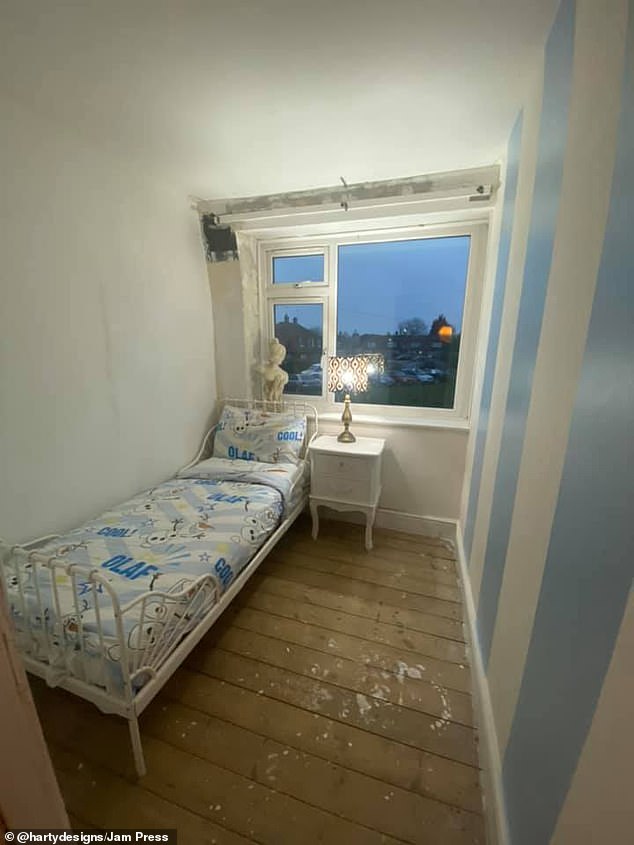 Along with the Wickes wood, she used plasterboard and paint to complete the room meaning her total spend was just £140. Here the wall is pictured completed and mid decoration 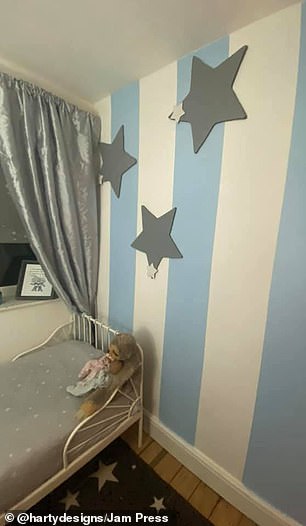 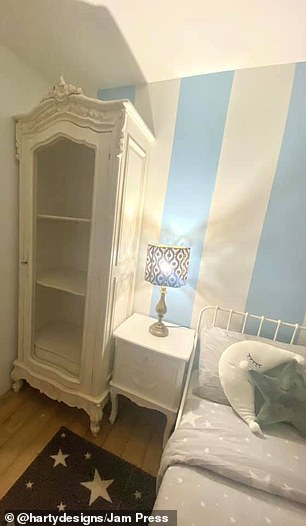 Amy decorated with blue and white paint and tasteful white furnishings. Pictured left and right is the new wall completed and decorated

The mother added: ‘My two sons will have the other half of the room, which is yet to be decorated.’

Amy shared the final results of her incredible room transformation on Facebook, and the post has garnered over 5,500 likes so far, as well as hundreds of comments.

One Facebook user wrote: ‘You have done an amazing job, looks so cosy in the new room.’

Another added: ‘Looks brilliant. We are in the process of splitting out big room into three, it makes such a difference and I can’t wait until ours is finished.’

Amy added: ‘I am over the moon with how things turned out.

‘It has been a tough week trying to juggle looking after the four children, helping with school work and building the room but it was all worth it in the end.

‘We are now playing catch up on some of the school work that was missed last week, but the long-term effects of having this space will outweigh having to catch up.’

Amy shared the final results of her incredible room transformation on Facebook, and the post has garnered over 5,500 likes so far, as well as hundreds of comments