A restaurateur has shown his love of a regional daily by wallpapering his diner with old copies of the newspaper.

Michael Collins has plastered his restaurant, the Hell’s Kitchen Diner, with pages from Sheffield daily The Star dating back to the 1970s.

Michael managed to get hold of old copies of the paper from a dealer on the internet.

He told The Star his regulars “love” the decoration. 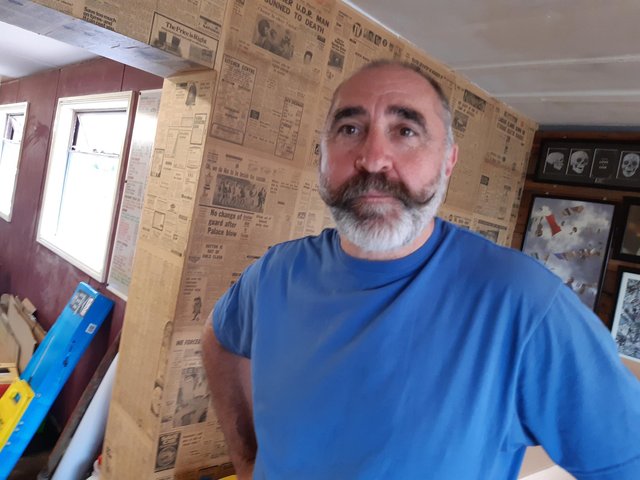 Michael, pictured with the ‘wallpaper’ in the background, said: “With copies of the Sheffield Star, you’ve got the history of Sheffield on the walls.

“People love the Star wallpaper, especially people of a certain generation. It’s not just reading the old news – people like to look at things like the price of the cars on the old car adverts, looking at adverts for things like a Triumph Spitfire for £1,500, or the adverts for twin tub washing machines at Wigfalls.

“They also like to look through all the old listings and see the old cartoons. All the papers that I used on the walls are from the early 1970s, mostly 1971 to 1974.

“You get people letting their food cool down while they’re busy reading the Stars on the wall.”

He added: “I think people definitely still love The Star. We see the editor on politics live on the television these days, and she mentions Sheffield a lot.”