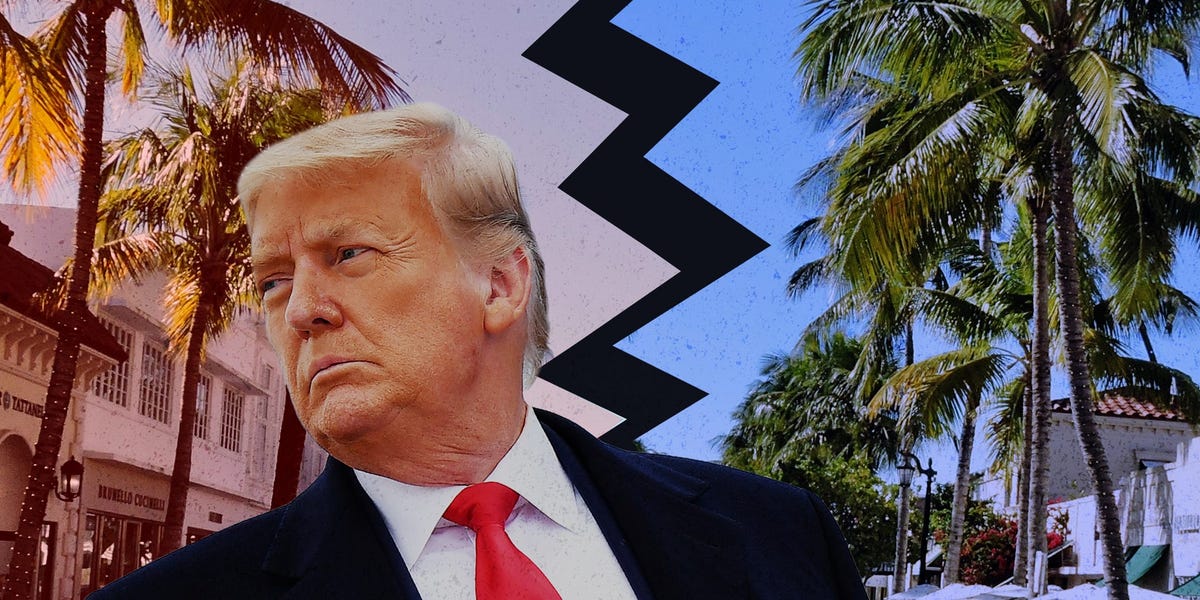 When President Donald Trump was evicted from the White House by American voters, he retreated to Mar-a-Lago, the gilded Palm Beach, Florida, club billed as the “winter White House” throughout his term.

Now he could be evicted from that stately manor, too.

The fight among residents over Trump’s post-presidential perch in Palm Beach is playing out against the backdrop of a booming local real-estate market. Over the past year, Palm Beach properties have notched records, buoyed by affluent transplants from Wall Street and Silicon Valley seeking sunnier climes and lower taxes amid a remote-work revolution born out of the coronavirus pandemic. Along the coast of the Sunshine State that stretches from Palm Beach south to Miami, an influx of boldface names is tightening housing inventory and pushing prices up.

I visited Mar-a-Lago and its lush surrounds last month and found a ritzy pocket of South Florida on the rise — one that’s poised to remain an enviable enclave for socialites and multimillionaires despite Trump’s residency and the cluster of opposition to it. Realtors told me the area’s homes were being snatched up in record time after bidding wars and that demand from wealthy relocators was driving West Palm Beach’s sales figures to record highs. The venture capitalist Peter Thiel and the legendary quarterback Tom Brady are just two of the powerful people settling in Florida right now.

Add Trump to that list: He’s been camped out in his ornate quarters at Mar-a-Lago since January 20, which could violate a 1993 agreement he made with the town. The arrangement allowed for the conversion of Mar-a-Lago from a residence to a private club that allows members to stay on the property for a maximum of 21 days a year.

In December, some neighbors signed a letter urging Palm Beach officials to enforce the agreement. The letter, written by an attorney representing the DeMoss family, asks Trump to live elsewhere and adds that he should be conscientious of the “embarrassing situation” that could come from an eviction, according to The Washington Post.

While a number of residents spoke out against Trump, others defended his right to stay. Take John Randolph, Palm Beach’s official attorney who backed Trump’s request to live at Mar-a-Lago. He said the 1993 agreement allowed for “bona fide employees” to use Mar-a-Lago as “living quarters.” Randolph said Trump was, in fact, an employee. The town council’s president, Maggie Zeidman, sided with Randolph, saying “it does not appear” that Trump has violated the agreement.

The hearing, which encapsulated a divided community, ended without a resolution; the council isn’t set to decide on the matter of Trump’s Mar-a-Lago residency until April.

The ‘mayor’ of Mar-a-Lago is both hated and revered

John Marion, an attorney for Trump present at the council meeting, said the former president “wanders the property like the mayor of the town of Mar-a-Lago.”

The estate is certainly big enough for him to do so. It spans the width of the island of Palm Beach, which is flanked by the Intracoastal Waterway to the west and the Atlantic Ocean to the east. Its sheer size is reflected in its name — Mar-a-Lago means “ocean to lake” in Spanish. It was originally built by a cereal-company heiress in 1927.

Trump bought the 20-acre Mar-a-Lago property for $8 million in 1985 and has since grown the compound into an exclusive private club with membership costing $200,000. Guarded gates shield the opulent club from the public eye.

Southern Boulevard, the major road leading to the Intracoastal bridge that deposits drivers in front of Mar-a-Lago’s neatly manicured hedges, is decidedly not as grandiose. It is dotted with typical, workaday hallmarks of Floridian life: There’s a 7-Eleven attached to a coin laundromat, a corner store advertising “bait and beer,” and a Flanigan’s — a beloved casual restaurant chain known for its ribs.

On January 20, shortly before Joe Biden was inaugurated in DC, Trump took his final motorcade ride down Southern Boulevard toward Mar-a-Lago as commander in chief. Hundreds of his supporters lined the street, waving banners that read “We heart Trump” and “Trump 4 ever my president.” Even Roger Stone, the longtime Republican strategist pardoned by Trump, joined the throngs. “I came to pay my respects because I love the man,” Stone told local news outlets.

The scene served as a stark contrast to reports that locals don’t want Trump around.

His neighbors implored Palm Beach officials to enforce a decades-old agreement Trump made with the town saying he’d never live at Mar-a-Lago full time. Officials are set to make a decision regarding his residency at the club in April.

Meanwhile, the nearby condominium Trump Plaza will strip the former president’s name from its branding in a sign of pushback to his role in sparking the January 6 insurrection. While residents will still have to decide on a new name, the condo’s board unanimously voted to strike the Trump moniker.

Mar-a-Lago club members are also taking a stand. Laurence Leamer, the author of a 2019 book about Mar-a-Lago, told MSNBC that some of the club’s members were even ditching their expensive memberships to distance themselves from Trump. He even called the club a “dispirited place” to be these days.

The weekend after he moved into his newly renovated Mar-a-Lago digs, planes flew over the property trailing banners calling Trump “a pathetic loser” and the “worst president ever.” The organizers of the display were anonymous, but the overt insults highlighted a community divided.

But whether or not Trump is welcome in Palm Beach does not seem to make a dent in the town’s general desirability. The housing market, for one, is stronger than ever. The island has welcomed scores of wealthy new residents amid the pandemic. Homes on the market are snatched up quickly, and lavish mansions are trading hands at sky-high prices.

The Palm Beach County clerk’s office recorded more than 20 home sales in 2020 over $20 million, doubling the number of homes priced above that benchmark sold in 2019, according to the Palm Beach Daily News. Case in point: A plot of land once owned by Trump with a brand-new 21,000-square-foot mansion just closed for roughly $120 million. Ryan Serhant, a broker of “Million Dollar Listing” fame, and Chris Leavitt of Douglas Elliman represented the buyer.

Most notable, the purchase shattered the record for most expensive home ever sold in the state.

Palm Beach “hits every note that any high-net-worth buyer is looking for,” Jay Phillip Parker, the CEO of Douglas Elliman’s Florida brokerage, told me. “The market is sizzling.”

Fueling the Palm Beach boom, Parker added, is an influx of well-to-do people from places like New York City, Boston, and Chicago who are relocating to a warmer locale with no income tax as the pandemic and remote work carry on.

“The pandemic is having tremendous impact in Florida, where markets like Palm Beach are now competitive with the high-end New York metro area because of where the C-suite wants to live,” Jonathan Miller, a real-estate data guru and the president of the appraiser Miller Samuel, told Bloomberg.

Insider previously reported financial heavyweights were flocking to the Sunshine State en masse. Carl Icahn and Charles Schwab both relocated to South Florida in 2020, while the hedge fund Elliott Management moved some of its operations to Florida and Citadel Securities set up a bubble in the Palm Beach Four Seasons at the outset of the pandemic.

They join the likes of Citadel chief Ken Griffin, who already had Florida digs. The billionaire has accumulated nearly $250 million in real estate near Mar-a-Lago over the past several years, along a historic oceanfront road known as “Billionaires Row” to locals. Bill Koch, a lesser known Koch brother worth an estimated $1.5 billion, is another Billionaires Row resident.

When I visited the area, I found it to be the perfect playground for multimillionaires and socialites. It seemed to be replete with lavish mansions adjacent to high-end shopping and gourmet restaurants helmed by Michelin-starred chefs. I saw too many Ferraris and Bentleys to count, along with miles of private beaches enjoyed by posh older couples and young families alike.

According to a recent report from Miller Samuel and Douglas Elliman, there were just 871 single-family homes available in Palm Beach County at the end of January. That’s 30% fewer homes than were on the market a year prior. Inventory is even tighter, bidding wars fiercer, and competition even more cutthroat on the island between the Atlantic and the Intracoastal, which accounts for just a sliver of the county.

And that inventory isn’t cheap. Douglas Elliman estimated the average sales price on a single-family home in Palm Beach at the end of 2020 was $6.5 million. Zillow puts the median home value (including condos and apartments) in the ZIP code at just over $800,000. Home prices in the area have jumped at least 5% in the past year — and Zillow predicted they’d rise another 5% this year.

However contested Trump’s move to the Sunshine State was, Parker said, it’s actually a net positive for the area’s real-estate market. The national spotlight on Mar-a-Lago and Palm Beach, he added, has “simulated an exorbitant amount of attention” to the “pristine and special” area, making the real-estate market ever more competitive.

“I see nothing but strength and mobility in the Palm Beach market,” Parker said. “If you take a bird’s-eye view of Mar-a-Lago, and you’ve never been there before, all you can say is: ‘Oh, my god!'”