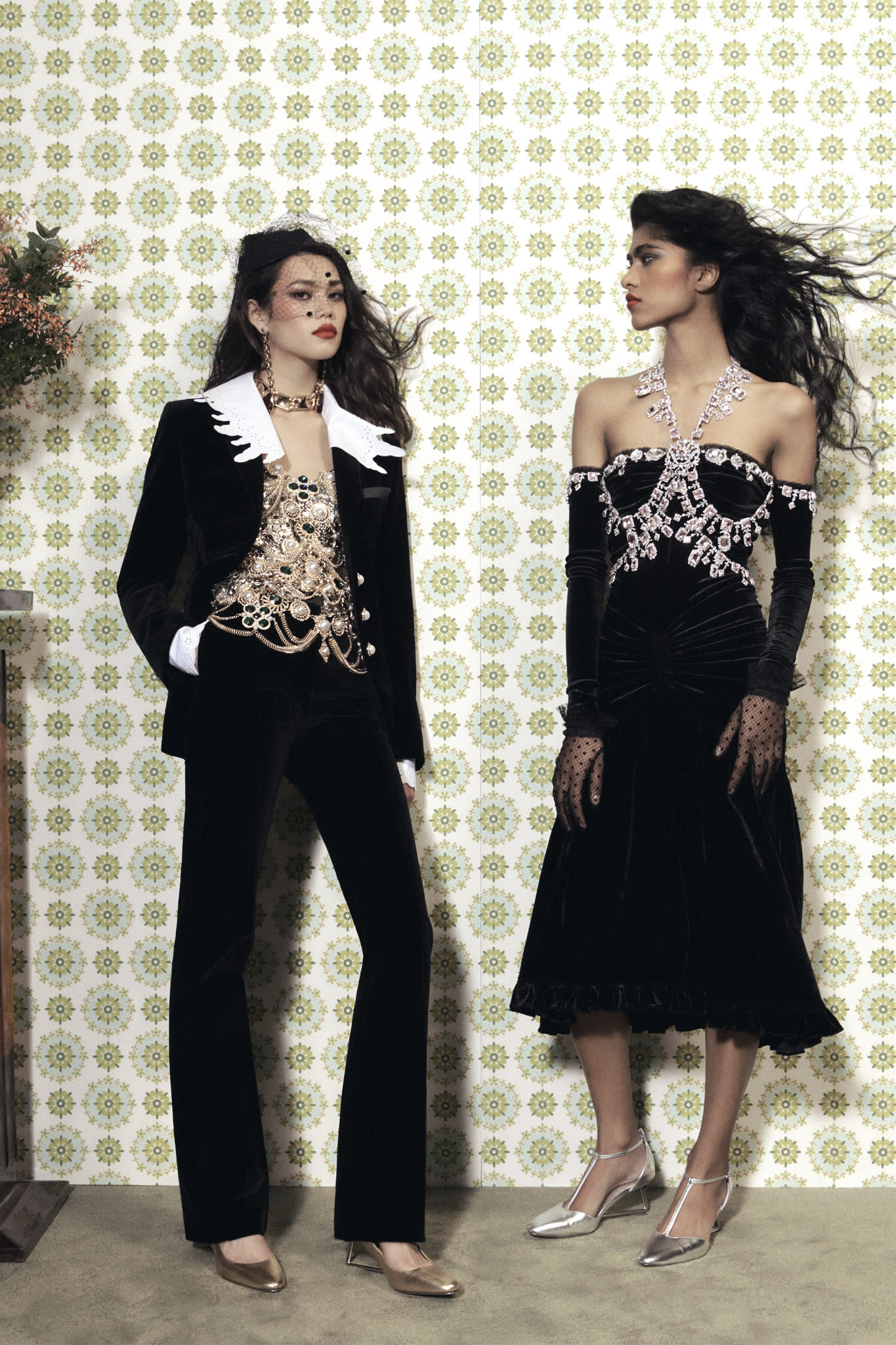 Julien Dossena shifted his focus from the streets — drawing on their grit and eccentricity — to a more intimate place, the bedroom.

We don’t see much of the room, save for the cute rhinestone purse that hangs enticingly on the footboard. The rest is all wallpaper, serving as a backdrop for each model as she bounces into the frame — yes, she’s jumping on the bed. (A trampoline, actually; the bounce is real.) It takes place in slow motion, allowing a peek at each look before it disappears, each as surprising as the previous.

The first model is decked out in a faux tiger fur hood; another wears a bright green mesh dress with a cape, embellished with rhinestones. A fitted velour top in tangerine orange is actually a dress, with a flower-print skirt — the look completed with an upright ruffled collar and a ring of chunky, smoky-colored crystals. It takes a while for the eyes to adjust — eye candy aplenty — but we’re soon itching for more.

“The joy that comes from jumping on a bed — it’s so naive and spontaneous,” said Dossena, speaking from an office with a sweeping view of Avenue Montaigne.

There was a naive and spontaneous air to the lineup — a mashup of codes and references to extravagant lifestyles from a bygone era, but not so long ago. It was also much more. Dossena has a knack for mixing disparate elements into something entirely new, and highly seductive.

“I wanted to push and push and push things to the extreme, so it almost becomes conceptual,” he said. Running with house’s tradition of experimenting with mesh, for example, he piled on the rhinestones, turning them into ornate body decoration that looped and swirled around the bodice.

A classic, boxy shaped coat was jazzed up with wide cuffs of fake leopard fur, while a trenchcoat carried an added layer of clear plastic.

“There’s an idea of intimacy — when you take your father’s coat, grab all the jewelry in the house and dress up, there’s a sort of joy in projecting yourself into something that you’re not at that moment, but you know you will be — a sort of jubilation,” he said.

Jubilation is exactly what we’re here for, at this stage of the pandemic. Dossena has, once again, captured the mood.

How to decorate your bedroom based on your star sign

Beautiful ways to give your home a new boho look