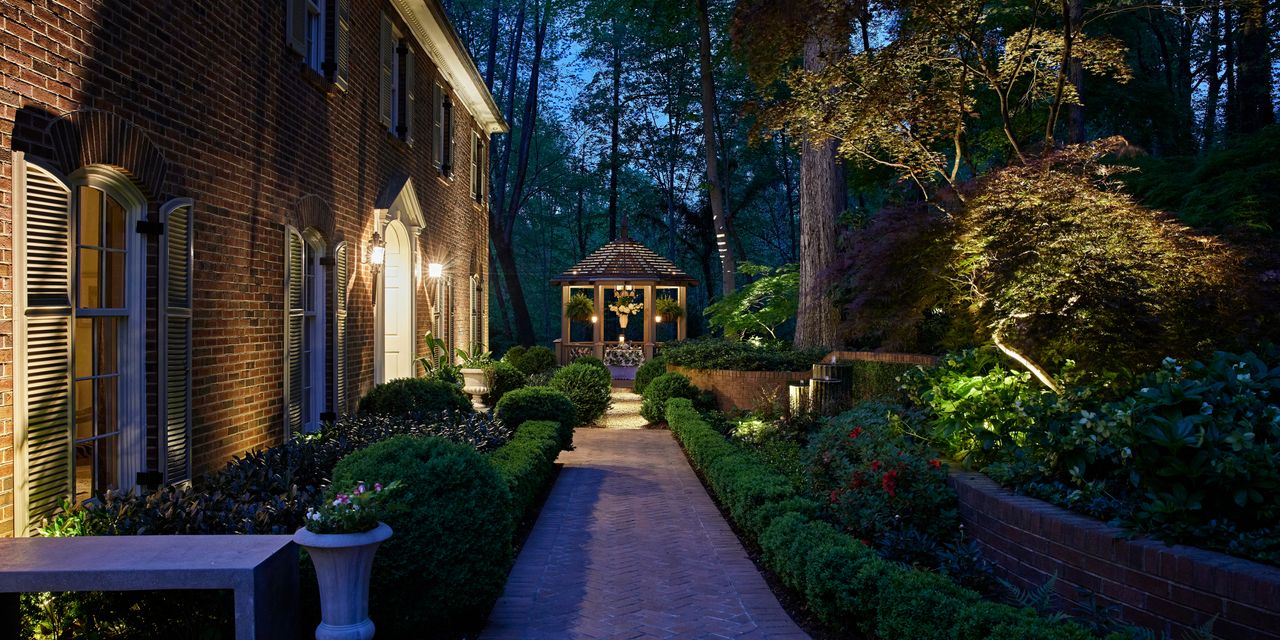 LAST SUMMER, those of us charmed enough to have a backyard to call our own tended our gardens and zhushed our patios with new furniture, maybe even springing for an outdoor rug. When it came to exterior lighting, however, most people aimed no higher than a swag of Edison-bulb string lights and a feebly flickering hurricane candle.

How have you updated your outdoor spaces in the last year? Join the conversation below.

“Outdoor spaces sometimes get overlooked after the sun goes down,” said Memphis interior designer Sean Anderson, alluding to such lame attempts at illumination. This spring, however, as we prepare to host en plein air again, why not tackle outdoor lighting—especially if you’ve upgraded everything else? Beyond a wish to enjoy their private plot at night, homeowners light landscapes “so that when you’re inside the house you can see the garden and not just a black hole,” said Ive Haugeland, founding principal of Shades of Green, a landscape architecture firm in Sausalito, Calif.

The best way to banish murky shadows is to borrow the sort of layered lighting scheme found in professionally designed living rooms. In simplest terms, you want three tiers. Start with the highest level, via lofty lanterns or up-lighting that draws eyes skyward or even chandeliers (yes, weatherproof versions exist; see “Worth Wiring”). Next fill in the midrange with sconces, illuminated plants or sculptures and tabletop portable lanterns. And don’t forget low-level illumination—that is path, understep and underseat lighting.

Designer Gray Walker, with the help of Outdoor Lighting Perspectives of Charlotte, layered outdoor lighting in her outdoor space to create a sense of discovery.

Designer Gray Walker, with the help of Outdoor Lighting Perspectives of Charlotte, layered outdoor lighting in her outdoor space to create a sense of discovery.

The cumulative effect should be subtle, not stark, “that feeling of fireflies on a summer night, that sense of discovery,” as San Francisco designer Ken Fulk put it. “The default has previously been an overly lit space.”

At a residence in San Francisco, Ms. Haugeland recently hung two outdoor-rated glass chandeliers beneath a minimalist pergola. To provide eye-level glow, she uplit the knotty trunks of century-old olive trees, then set low LED lighting into step risers for safer sauntering after dark. The chandeliers are “a little over the top, so they’re very fun and playful and what you don’t expect to see outside,” said Ms. Haugeland.

“
‘We can be impactful without being garish or feeling like we’re in Las Vegas.’
”

Solar-powered outdoor fixtures are still too dim to rely on, said the landscape architects we polled. A reasonably sized fixture can’t house enough photovoltaic cells to produce anything but a sickly glow. Meanwhile, the latest low-voltage LEDs not only last a long time, they can be easily and cheaply wired. “[In the] 1980s and into the ’90s, landscape lighting was run using high-voltage electricity,” said Washington, D.C., landscape architect Joseph Richardson, who recently uplit the river birch trees surrounding his own Arlington, Va., home. “It meant fixtures were very large and very bulky, and the cost was extreme. You had to run buried conduit plastic pipes through the yard, and if someone were to hit that with a shovel they could be electrocuted.”

Today’s LED fixtures suck as little as 3 watts as opposed to the 35 watts that incandescents fed on, Mr. Richardson said. That means you can use low-voltage wiring, a small wire that can be buried under just 6 inches of soil. “You can install [that] after a garden is built, and it would not hurt you if you touched those wires,” said Megumi Aihara, founding partner and principal of San Francisco’s Spiegel Aihara Workshop. (Note: The designers we interviewed recommended hiring a professional electrician or landscape firm to at least install your main transformer, which converts your home’s 120-volt juice to 12-volt power.)

To light her North Carolina yard (pictured on D1) designer Gray Walker turned to low-voltage specialists Outdoor Lighting Perspectives (OLP) of Charlotte. A brick walkway behind her house leads to a small eight-sided gazebo. “You’ve got your path lights to illuminate the ground and then I like to lift the eye up,” said Ms. Walker. Uplit oak trees and Japanese magnolias create a “wonderland” of branches. The path passes a trio of gurgling columnar fountains that are highlighted to provide midlevel illumination, while other lights shine on shrubs, casting shadows on the brick exterior of her Georgian-style home. “This adds a bit of texture and dimension to the wall,” said Mari Zaragoza, production coordinator at OLP. “It was important to not keep everything in the same level, to create as much depth and texture as possible.”

Ms. Walker’s gazebo quietly commands attention at night. Two upturned accent lights shine thin lines of light through its slatted roof for a “glowing effect,” said Ms. Zaragoza. “We really thought this created a natural focal point without it being too overdone.”

Low-voltage lighting helped Ms. Aihara execute a multilevel scheme in a Los Angeles yard (pictured, above). Perforated metal tubes diffuse light throughout the canopy of deciduous trees, and cast modest pools on the deck and the greenery that surrounds it. Another one of Ms. Aihara’s tricks: Dek Dots from Dekor lighting. “They’re small, half-inch LED dots,” she said. “During the day, they disappear, and at night they twinkle on the ground.”

Don’t wish to deal with running any kind of electrical wiring? You can easily find options that plug into an outdoor socket but are far more aesthetically ambitious than string lights. Examples include articulating floor lamps and hanging lamps like Lightology’s Garota Plug-In Pendant (see “No-Pro Lamps”).

Even better: lights that you can cart around as freely as a flashlight. “We’re noticing an increased interest in rechargeable, free-standing lights that run on LED bulbs and batteries,” said Greenwich, Conn., landscape architect Janice Parker. Check out the cartoonish mushroom lamps from Hay at the MoMA Design Store as well as braided-rope lanterns by Talenti. Both double as tabletop and path lighting. Ms. Parker hangs portable LED lanterns from tree branches or decorative hangers. “You can easily move them around as needed, and guests can use them if they want to go for a stroll.”

Other landscape architects are eschewing visible fixtures altogether, hiding strips of LEDs under stair treads, for example. In the courtyard of a Berkeley, Calif., home, design firm Delaney + Chin tucked wet-location LED tape under a white stone bench as well as in the ground to shine a wash of light along the bottom of a corten steel wall. The goal, as Ms. Parker put it, is to achieve lighting “that you do not perceive as coming from fixtures but naturally from the moon.” Roderick Wyllie of Surfacedesign, a landscape architecture firm in San Francisco, recommends placing fixtures at least a foot away from the plant or architectural element they’re meant to highlight to avoid harsh, unflattering “hot spots.”

Such toned-down design lets us see and appreciate the nighttime sky, notes Mr. Wyllie. Many municipalities are embracing dark-skies policies intended to curb light pollution and lessen the impact on birds, the bugs they eat and other fauna, said Matthew Bromley, a landscape designer in Bedford, N.Y. “We can be impactful without being garish or feeling like we’re in Las Vegas.”

You may not need as many path lights as you think, for example. Mr. Richardson said one of the habitual mistakes homeowners make when they tackle lighting themselves is spacing path lights too closely. “It almost gives you a runway effect,” he said, adding that you can ensure navigability without committing overkill. “I try not to space [them] any closer than maybe 12 feet apart.”

Another interior technology that has moved outdoors: dimming. “There are times when you may want outdoor lights brighter or dimmer for whatever reason,” said Mr. Fulk. Perhaps you wish to bring the lights up slowly as the sun retires. He reports a growing demand for this flexibility. Similarly, multiple designers said their clients love that many LEDs can be tweaked—even transformed into a rainbow of hues—from their smartphones using programs from Lutron Homeworks and Savant.

As with LEDs inside your home, color temperature, or Kelvin ratings, matter. A bulb on the high end of the Kelvin range, near 6500, will emit a cooler, bluer light. Lower kelvins translate to warmer, softer whites. For outdoor use, Dan Spiegel, who’s also a founding partner and principal at Spiegel Aihara Workshop, advises selecting lightbulbs with lower color temperatures, around 2700 Kelvins.

Whether you hire professionals or do it yourself, Mr. Richardson recommends starting slowly. You can add extra light sources later. “Once you take the fixture out of the packaging and stick it in the ground it gets harder to return.” For her part, every time Ms. Walker pulls into her driveway at night, she appreciates the effort she’s put into her lighting, she said, from the gazebo to the glow-guided path. “It just makes me feel like I live in a little jewel box.”

In an earlier version of this story, a designer was quoted saying that low-voltage wiring can be run on top of soil and under mulch, which is not correct. It should be buried 6 inches into the earth.

The Wall Street Journal is not compensated by retailers listed in its articles as outlets for products. Listed retailers frequently are not the sole retail outlets.