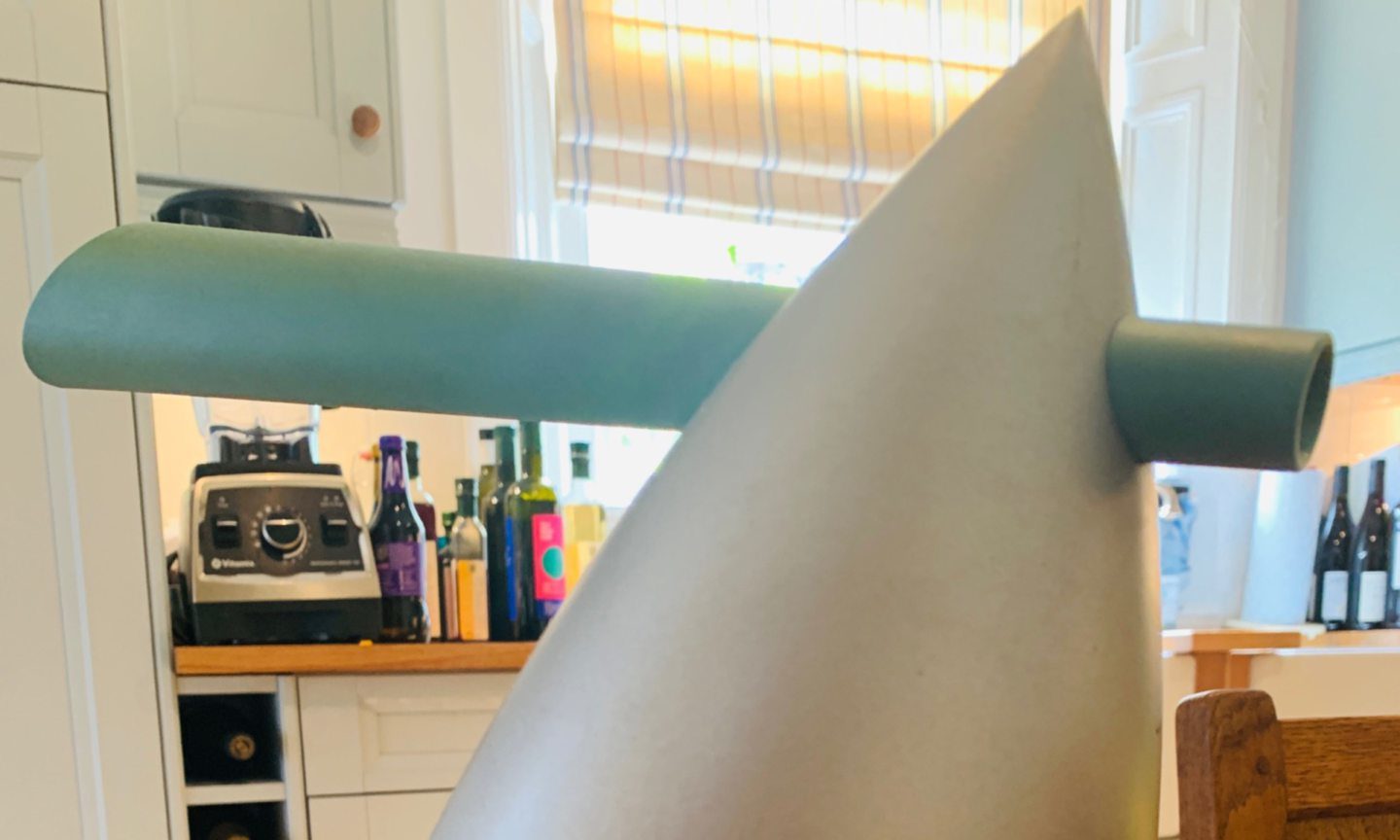 Memories of old and new emerge from the discovery of some old, and interesting looking, gadgets from Murray’s kitchen cupboard.

I’ve been making bread in my bread-maker because I’m taking a stand against the ubiquity of sourdough.

This simple statement betrays much about my psyche and also the skewed priorities of lockdown. I like to pretend that I was getting bored with the whole process of making this most laudable of loaves – which is to lockdown what hooch was to prohibition – but the real truth is I like to be contrary and recklessly fly in the face of fashion, sometimes inviting ridicule as I do so.

This is probably the one and only trait I would admit to sharing with the hapless Scottish Tories. Unlike them, however, I try to retain a policy of positivity lest I appear to join their ranks as eternal embittered bridesmaids.

This bullish contrariness is worsening as I age and I’m currently one step away from buying a 1996 Jeep Cherokee, having a hair transplant and admitting to liking polka dot pyjamas. It’s also why I continued to guzzle heavily-oaked Chardonnay when it became deeply infra dig and why I still love the smell of Polo by Ralph Lauren, which, for me, is the smell of ambition, fabulousness, travel and sex.

One sniff of a deeply smoky Chardonnay or Polo aftershave and I’m 26 years old and treating New York as my playground. Since both aromas are easily accessible in lockdown it’s a simple way to take your mind on a trip that your immune system currently can’t afford.

Enjoyed together the smells instantly transport me to the Lower East Side and, for once, I’m thinking beyond Asda in Dundee and the Whitfield recycling centre.

Funnily enough, while clearing out a cupboard I found a table setting I’d taken from a dinner on the final night of my last trip to New York in February 2019, just before our world closed for business.

The table placement was for a party celebrating Yoko Ono’s 86th birthday and dotted around the room were her family and friends, including artistic giants like Patti Smith, Laurie Anderson, Cyndi Lauper and Anohni. At the centre of it all sat Yoko, quite small in physical stature but with a presence that quietly dwarfed everyone there singing Happy Birthday.

Looking now at the tasselled decoration I kept as a souvenir I’m struck how the power of imagination can help us through the most horrible of times.

The thick card is printed with a picture of waves and an inscription that proved particularly inspiring during the more negative moments of the past year, when you often wondered if you’d ever travel further than the bin shed. Yoko’s quote reads “you may think I’m small, but I have a universe in my mind”. Word!

Until such times as we can travel, I’ve been going through a whole load of cupboards and working out what’s really needed in life when home returns to be being more of a sanctuary and less a prison.

The first thing I spotted was my old Panasonic bread-maker, lurking in the depths of the utility room.

At first, I tried to remember what made me buy such a monstrous piece of kitchen kit. It’s huge and quite ugly! Only the dimensions of this behemoth domestic furnace stopped it being relegated to a cupboard housing other implements once deemed vital to contemporary survival – the deep fat frier, the rice cooker, the spiraliser and the kombucha-making equipment, still incubating a life-force called a mother, slowly expanding in a broth of yellow spume.

Most of the above were bought by me and probably lasted less than the lifespan of a battery hen before being quietly retired from service. The bread-maker was different in that it had been given to me as a Christmas gift by my then partner and that in itself should have set off warning bells. Let’s face it, it’s not the most romantic of gifts, is it? It would get worse.

The year after that I received two tea towels and three cookbooks I’d already passed over in the sale section of TK Maxx on December 23.

Even the least romantically inclined would have to admit the sale section of TK Maxx on Christmas Eve is hardly Breakfast at Tiffany’s, or even a well-fired roll from Clark’s bakery as the dawn rises over Dundee. The relationship ended shortly after. The cookery books remain defiantly unread.

Because I’m quite an acquisitive person and I’ve moved around a bit in my 61 years, I have a lot of stuff. At one stage I had three houses, which is not just careless but reckless.

All three had pretty much the same stuff in them so, when I reduced my life to living in one place, I had three Dualit toasters, three juicers and – shockingly – often three copies of the same books and CDs.

I know! I was like the Elton John who somehow ended up on Ryanair, smuggling Colman’s mustard powder into France in my hand luggage. On a happier note, if you ever need a copy of any of the River Cafe cookbooks then I have three.

Despite such profligacy though, I only had the one bread-maker and that’s because even I realised that bread comes from a baker and bakers did exist in SW France and Walthamstow, my two stomping grounds at the time.

The bread machine is a revelation! It’s not that I don’t have the time to make bread from scratch right now – it’s more that I just can’t be bothered.

Also, there is something incredibly magical about bunging in a very few simple ingredients at midnight and waking up to the smell of fresh bread in the morning. Any thoughts of Mike Leigh’s Nuts in May or The Good Life are swiftly tempered by the joy of spreading still warm bread with butter and a dusting of sea salt and crunching your way into Monday.

Frustratingly, I’d lost the instructions for the bread-maker and so had no recipes – few of my posh cookery books acknowledge the slightly slothful connotations of machine-made bread.

But Brilliant Bread In Your Bread Machine, a book bought online for £5.48, proved great and I’ve since found Traditional Breads For Your Bread-Maker on my shelves. Here, though, much seems to rely on both the machine and the oven, defeating the object for such an inherently lazy person as myself.

My favourite machine-made bread thus far is the simple white loaf which has six ingredients and one of them happens to be water. It tastes great and makes excellent toast. What more do you need?

Realising I had neglected so much kitchen kit I started poring over recipe books looking for inspiration. That sad spiraliser? Make shoestring fries, as detailed by Nigella Lawson in her excellent book At My Table.

Deep fat frier looking unloved? Again, Nigella is your saviour with her mind-blowingly seditious conceit of putting your raw potatoes into cold oil and heating them up.

Those Tuscan Fries (from the book Nigellissima) are reputedly amazing although I’m not sure the taste would permeate the dry mouth of fear I get every time a chip pan spits hot oil, however contained. I also have a deep concern about smelling like a chip shop, especially one drenched in Polo.

It seems all our kitchens are filled with unused stuff. A quick poll online elicited responses ranging from author Fiona Gibson questioning buying a slow cooker when she’s worked from home for 25 years and could simply start cooking dinner at any time of the day, to journalist/broadcaster Michael Lander who admitted that his chicken brick was now a terracotta plant holder in his back yard.

Juicy Salif, the Philippe Starck juicer that looks like it landed from Mars, seems to be on everyone’s list of objects that place form before function – but what a form! It raises a smile every time I look at it, which isn’t something you can say about much these days.

For me though Starck hit peak joy with his brilliant colander reimagined as a mothership (Max le Chinois, currently holding string and elastic bands on my kitchen counter) and his astounding non-kettle kettle, Hot Bertaa.

This 1989 postmodern sculptural beauty was so fantastically useless that Alberto Alessi, who produced it, eventually described it as “our most beautiful fiasco”. It lasted eight years before it was quietly withdrawn. What went wrong? It would be easier to say what went right – it looked great, albeit in the hugely mannered way that summed up the age.

The flaws were rather more serious though. Firstly, you can’t tell how full it is and the handle is placed in such a precarious position next to the spout that the user risked a severe scalding with every attempted cup of tea.

As such it was entirely dysfunctional, so much so that it appeared on the UK’s A-level design and technology syllabus as a tragically blistering example of how form must indeed follow function – especially if you’re a kettle.

My best discovery about kitchen kit is actually a book – Lindsey Bareham’s quite brilliant The Trifle Bowl And Other Tales, a truly inspired collection of recipes based around the utensils in Bareham’s kitchen.

This is a book to read and to treasure, evoking not just the joy of cooking but the memories and emotional responses brought about when we cook, centred around the objects we surround ourselves with in the kitchen. An overlooked triumph by one of my favourite food writers, and hugely recommended.

The Trifle Bowl And Other Tales by Lindsey Bareham. £15

Murray Chalmers: Dining in style with West End boys and some ice-cool girls