Skip to content
Home Design
nikholas
Fort Wayne is home to many iconic houses, but one, in particular, on the city’s Northeast side is earning its share of internet attention lately.

A mid-1970s time-capsule home with shag carpet in the kitchen and bathroom has gone viral and was even featured as Realtor.com‘s “most popular home of the week” in early December. 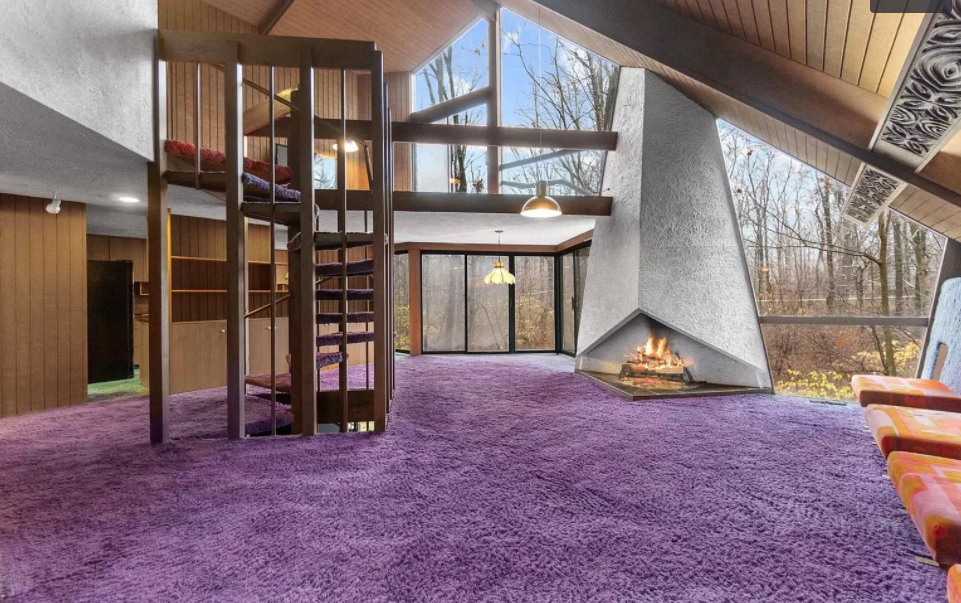 Stunning views inside the main living area of the home in the 2110 block of Parkland Dr.

As the house garnered hundreds of thousands of views online, one of them was from the Jackson family of Clermont, Fla., who ended up purchasing it. Since then, the family of four has attracted 43.4k followers on their Instagram account as they renovate the space from shag to chic and inspire others to live and manage money differently. 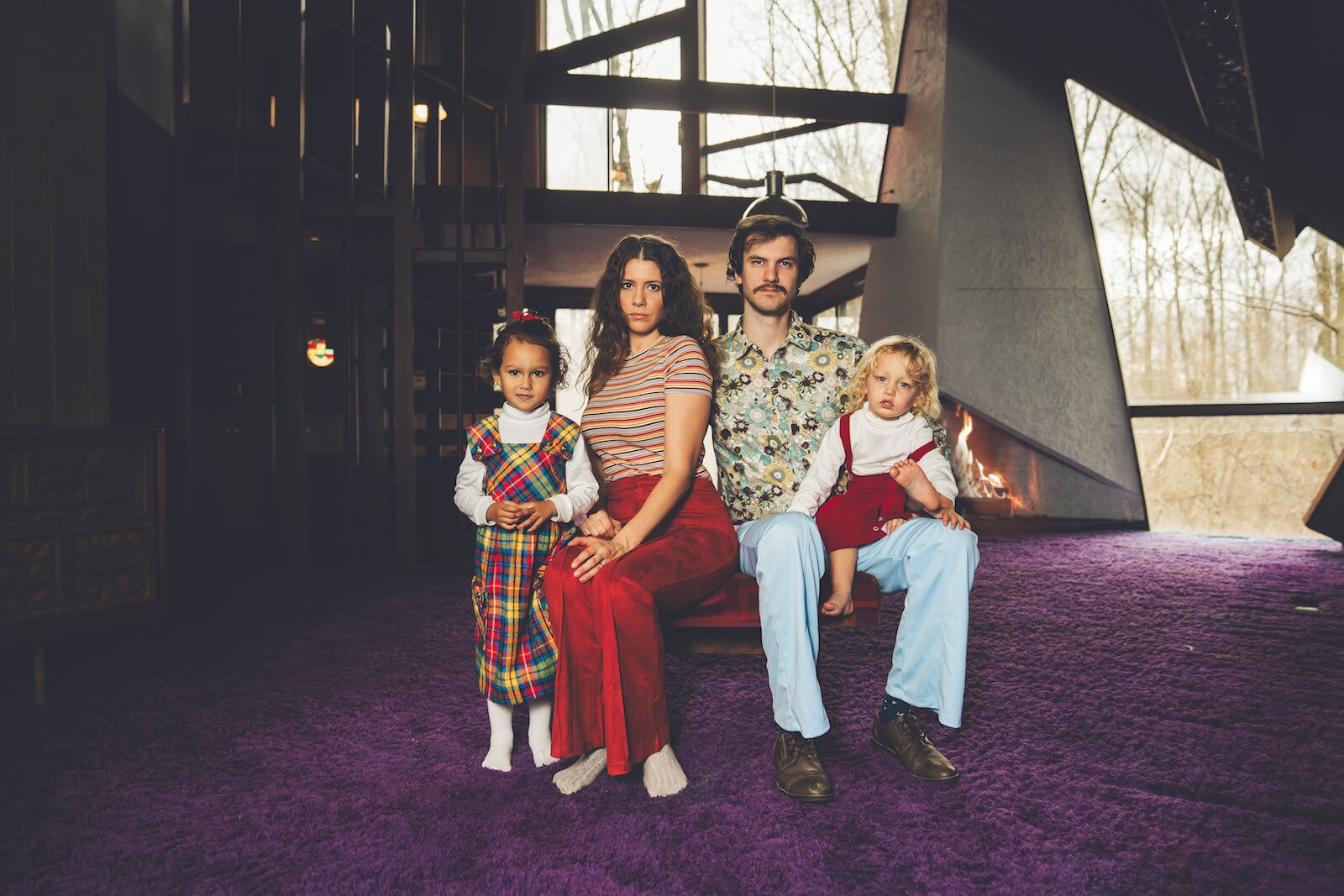 The Jackson family did a fun 70s-themed photoshoot with Fort Wayne photographer Dustin McKibben as a tribute to the home’s design.

How the Jackson family came to own this throwback residence in the 2110 block of Parkland Drive is a story in and of itself. According to the wife, Alysha, the couple had been toying with the idea of becoming investment property owners. As former school teachers, they saw the house listing and seriously considered making an offer, since Nate has family in the Fort Wayne area. Alysha says she was skeptical at first, but everything seemed to fall into place.

“We definitely did not expect to even get the house, but we contacted the real estate agent anyway,” she says. “We did a Zoom tour of the home, and then, by Monday morning, they had accepted our offer. It’s crazy because… as of Friday night, we were not looking for a second house. But by Monday morning, we had made an offer on one thousands of miles away. Then two weeks later, we drove down to the closing.” 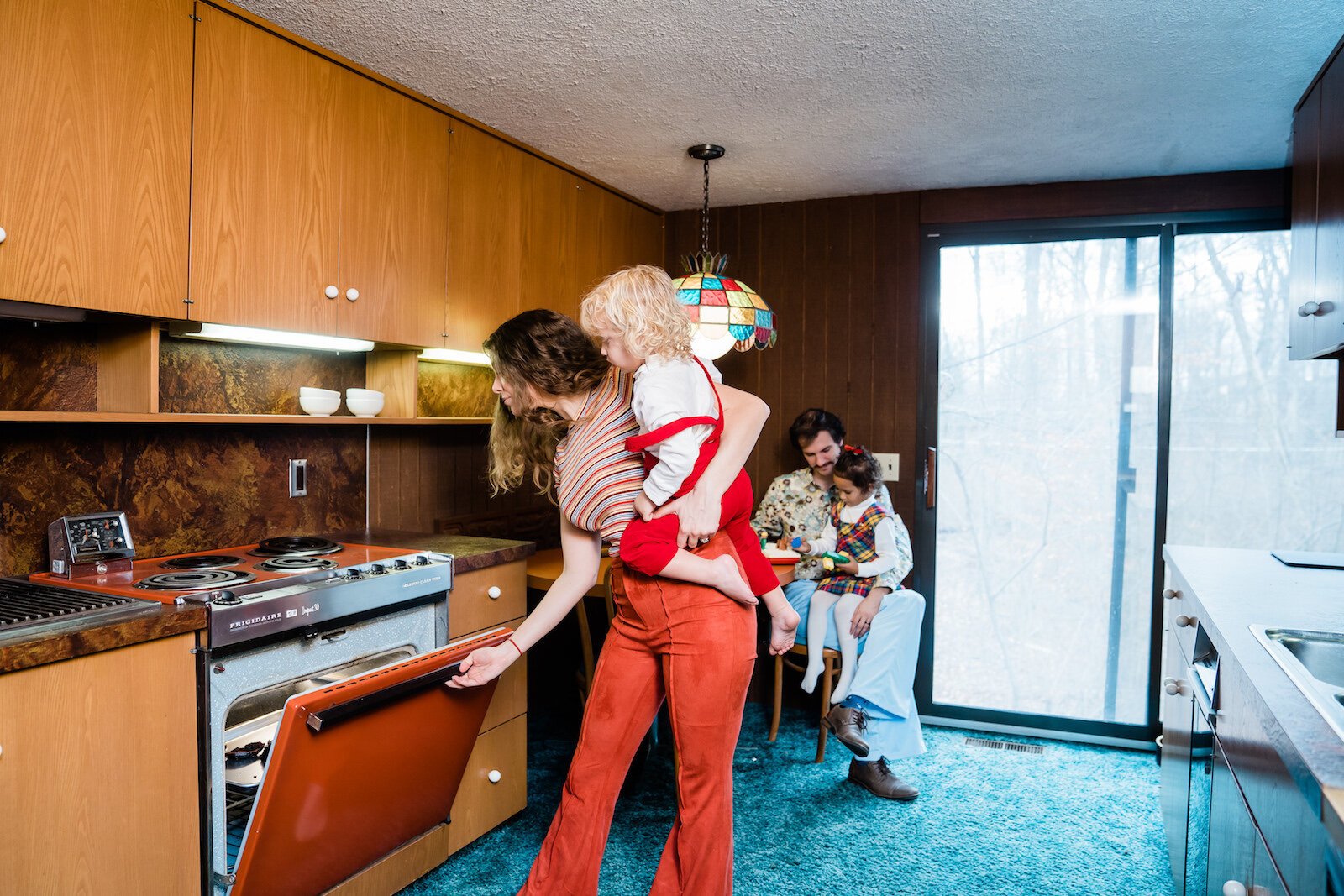 The Jackson family did a fun 70s-themed photoshoot with Fort Wayne photographer Dustin McKibben as a tribute to the home’s design. 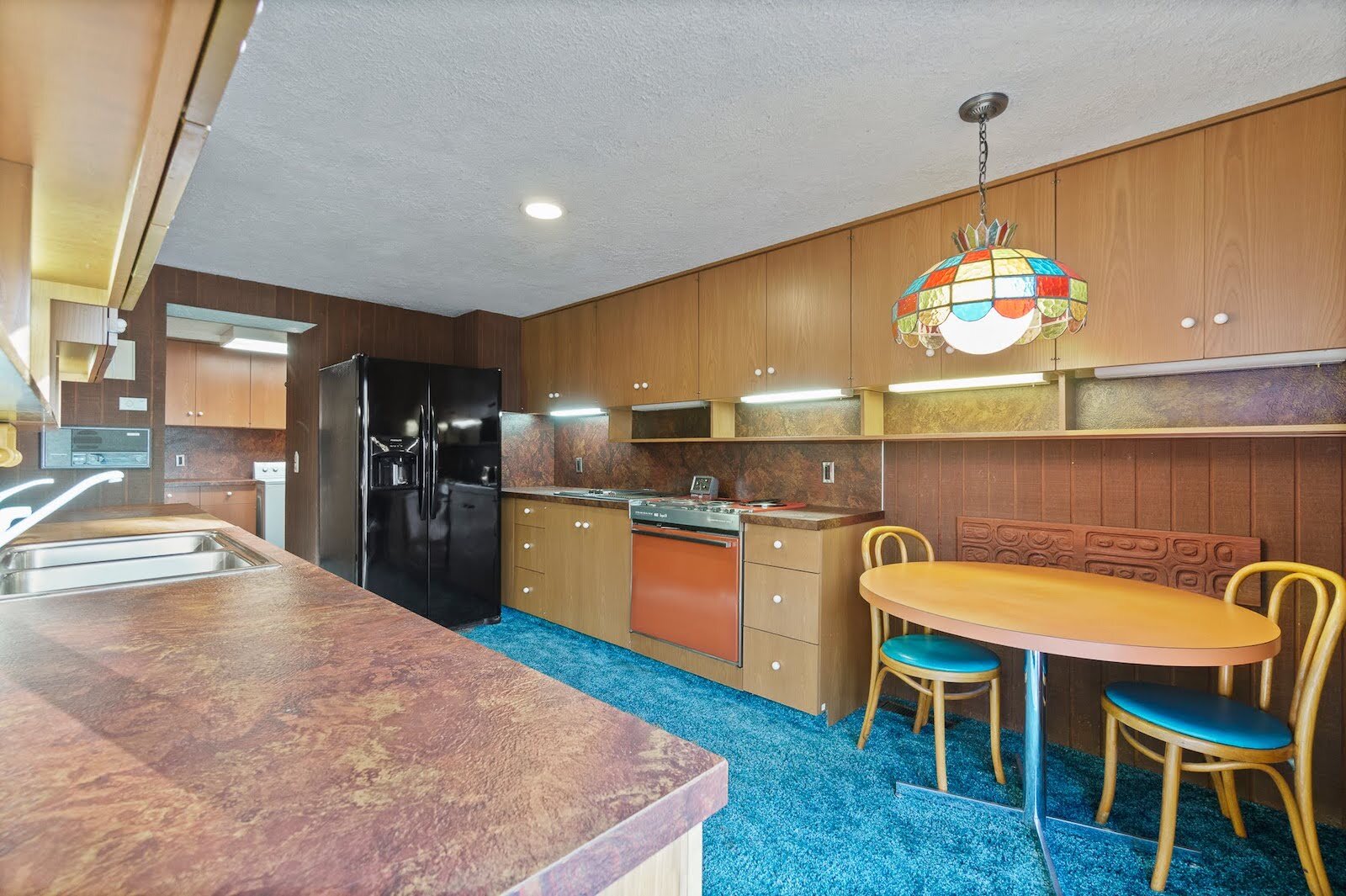 Shag carpet in the kitchen.

Alysha acknowledges this is a bold move by most people’s standards, but says she and Nate are risk-takers by nature, and they see the property as a smart long-term investment. Their go-big-or-go-home attitude is exactly why they came in at a few thousand dollars over the asking price. The property was originally listed at $159,900, and they submitted an offer for $161,000. Their luck is pretty amazing when you consider there were nine other contingent offers. 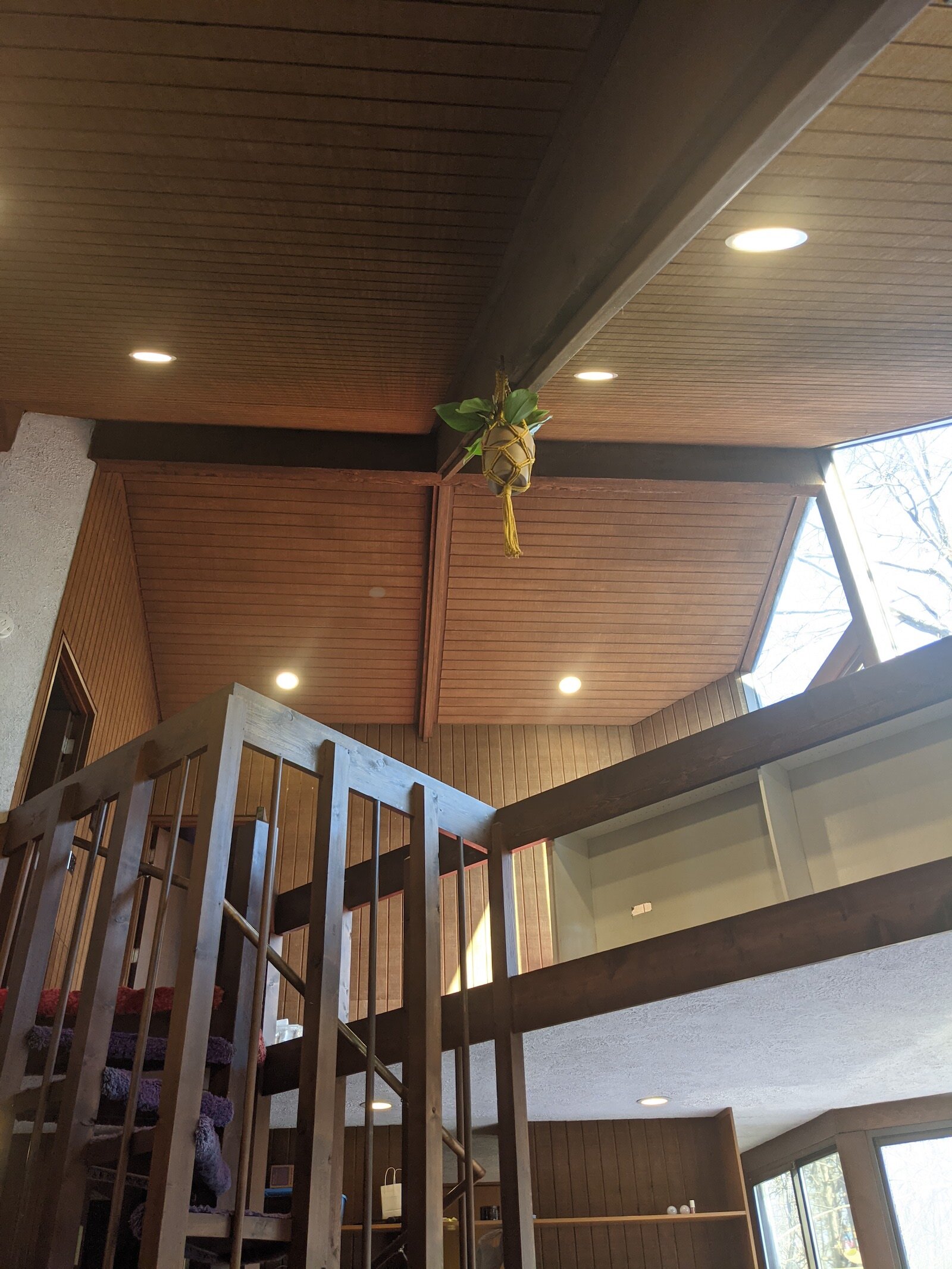 Now that the paperwork is taken care of, Alysha and Nate are in full-on renovation model. Their plan is to get the place ready to debut to their internet following by the summer. In the meantime, they’re staying on-site to oversee the work and then plan to divide their time between their Florida residence and Fort Wayne.

It’s all part of their long-term plan to turn the 3-bedroom, 2.5-bath house into a place to call home, as well as a source of income.

“With family living here, that was a lot of the motivation for buying this home,” Alysha says. “We have a two- and three-year-old. So we’re going to spend some time here during the year, but also in Florida. Our home in Florida is really close to Disney World, so that’s convenient. So whenever we are in one house, we will list the other on Airbnb as a short-term rental.” 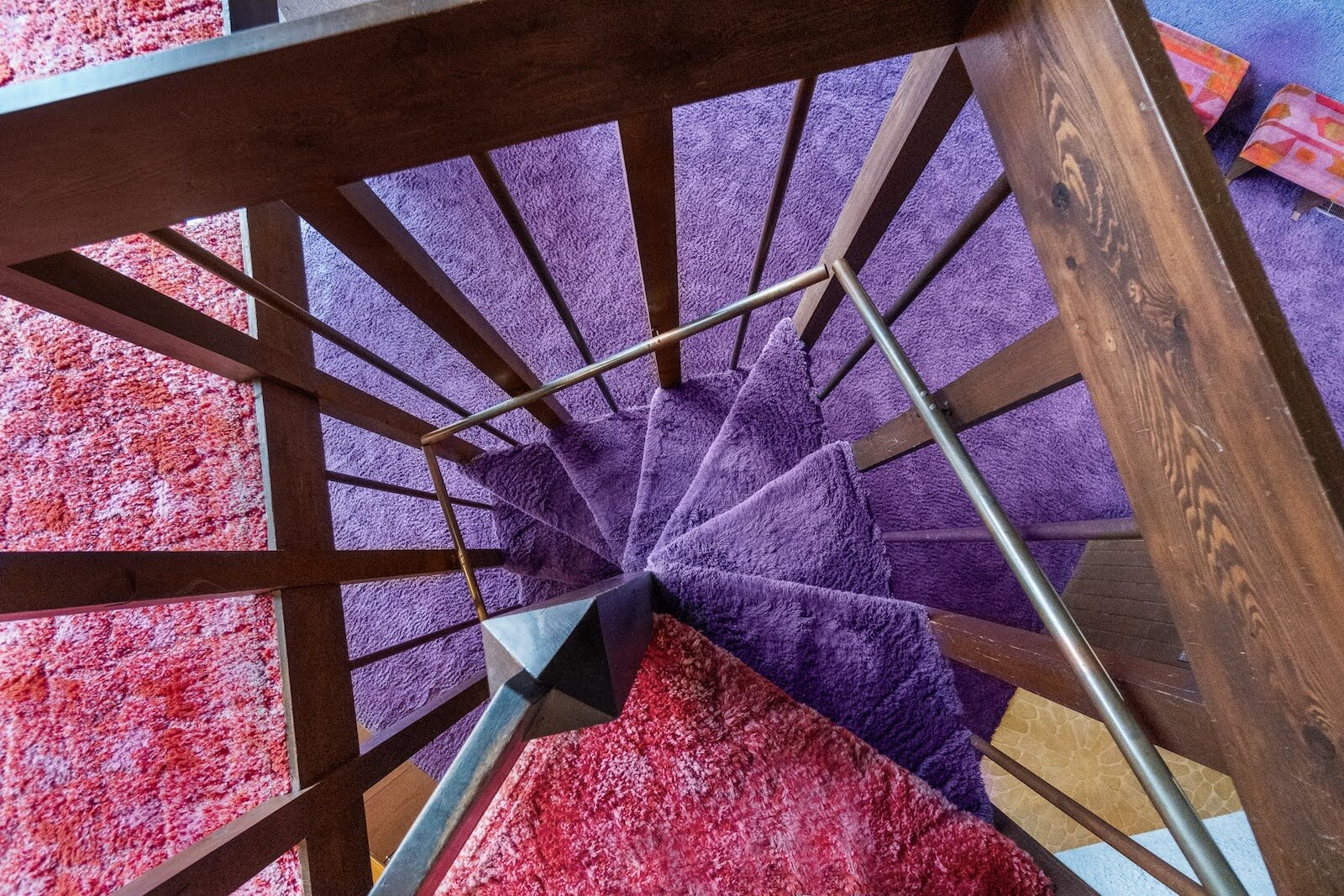 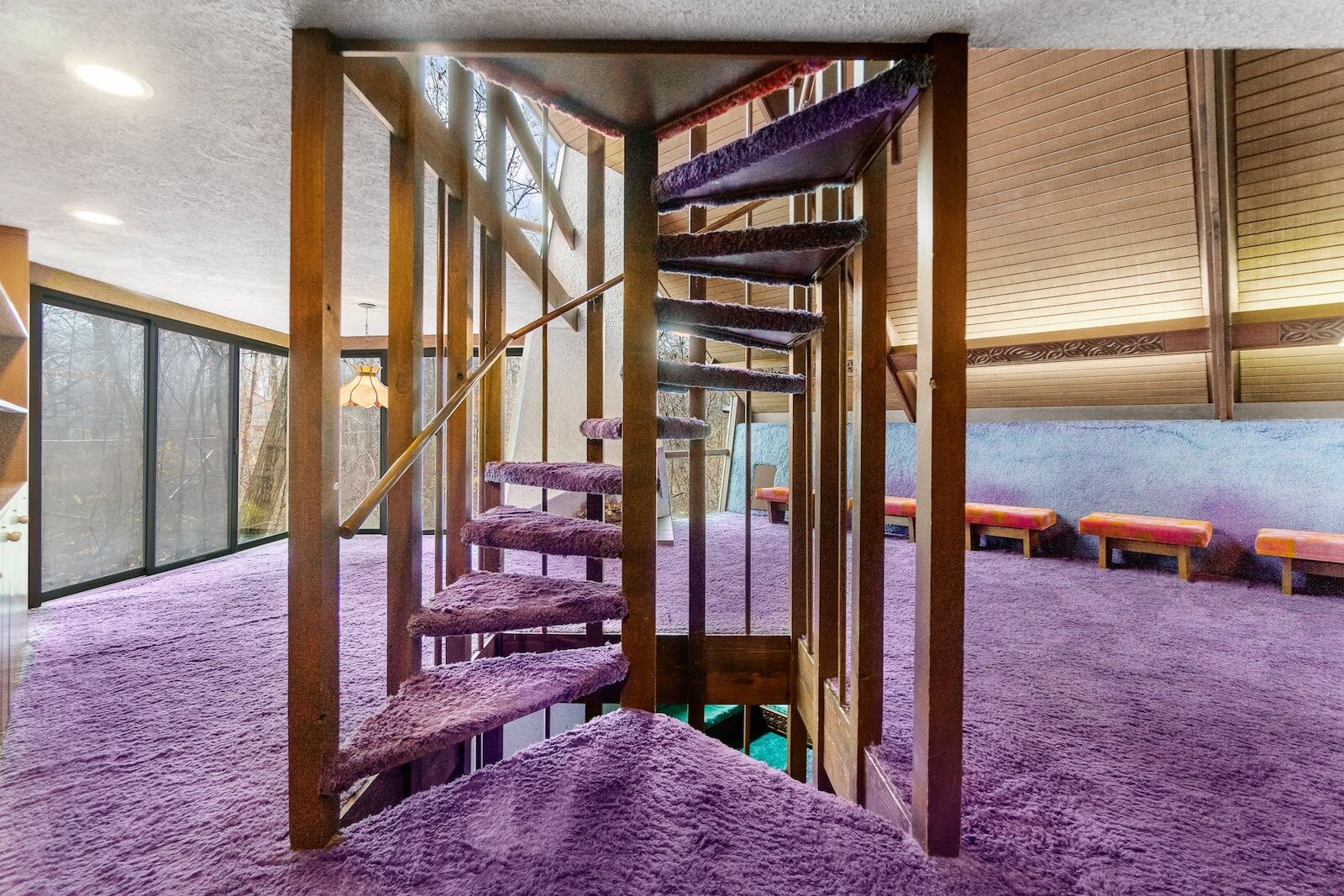 Nate and Alysha are among a cohort of ex-teachers who have left the profession to pursue other ventures. “Over the years, thousands have left the system due to low pay and rigid hours,” according to a TechCrunch article from last fall.

Entrepreneurship has granted them the freedom to take on such time-intensive projects as a home renovation, and in a video the couple filmed together about buying the home (above), Nate says they’re documenting the process in detail on Instagram to show others a different way of living and managing finances. 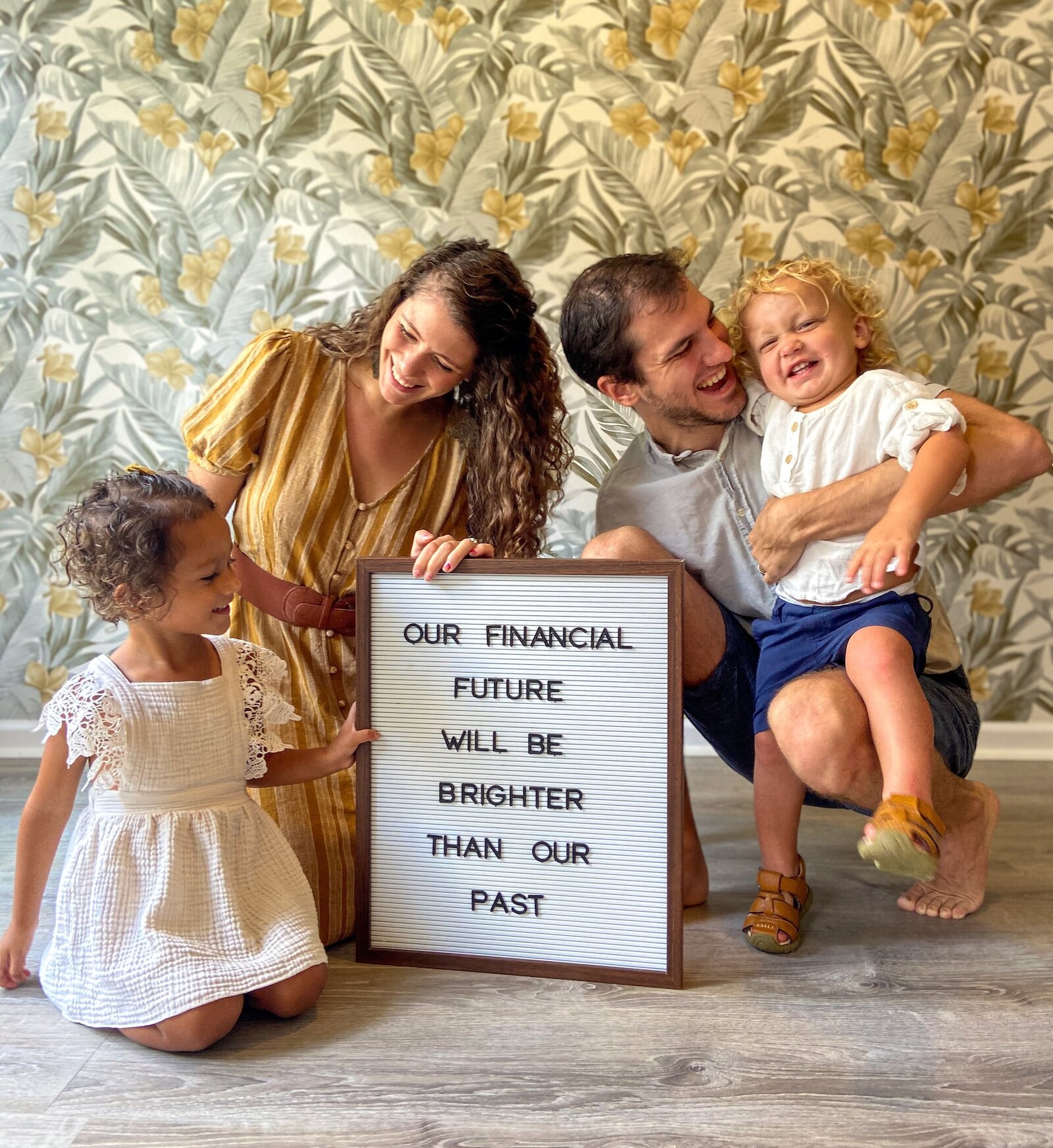 Alysha and Nate Jackson with their two children.

In an age when eye candy is king, Alysha feels the home has a lot of potential to attract visitors and followers.

“The home itself is striking; there’s so much attention to detail,” she says. ”I think what really struck us was the angles. When you walk in, the whole scene just stuns you. It’s so beautiful. We plan to continue on the previous owner’s work to keep loving this house.” 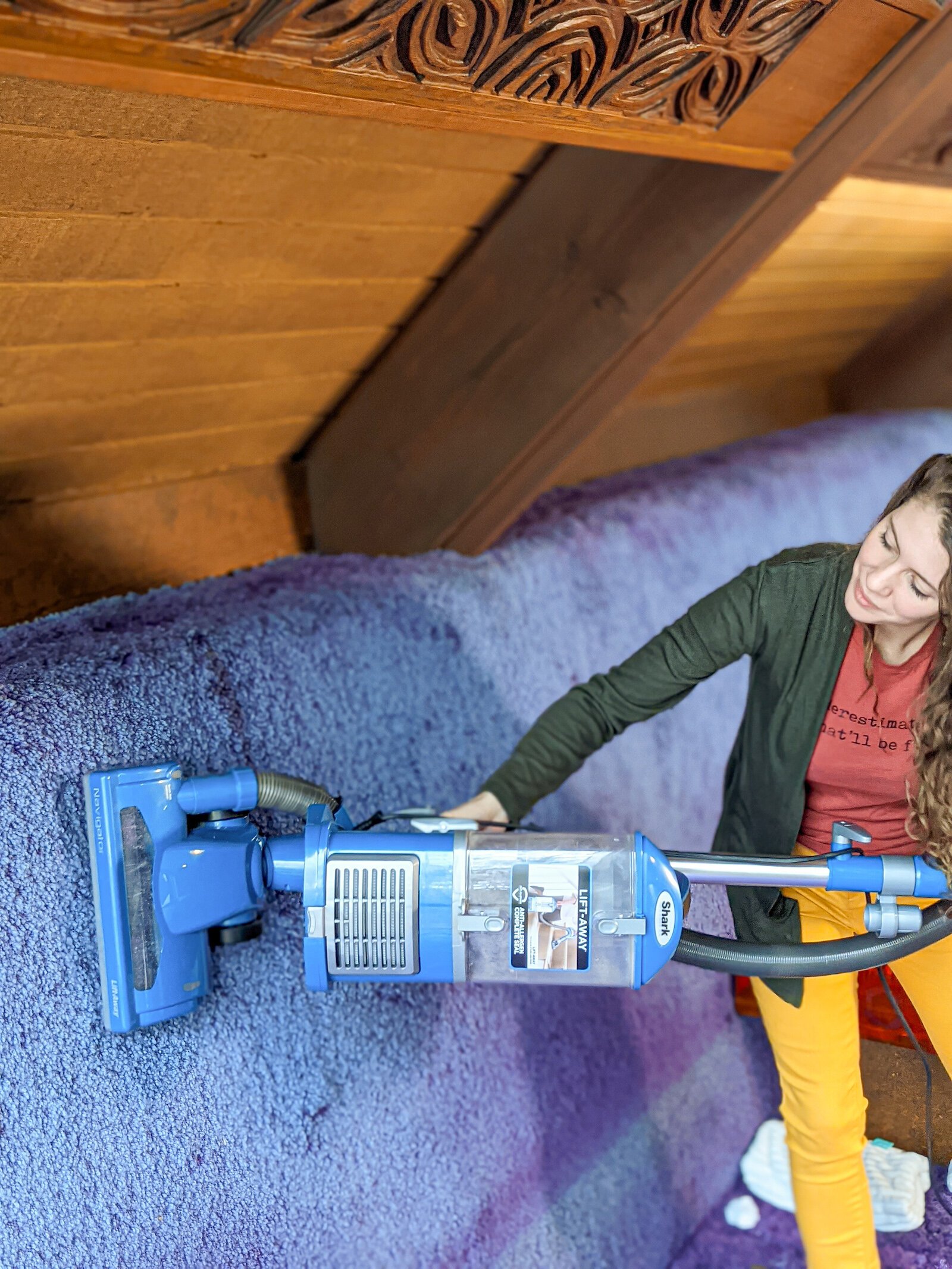 Alysha Jackson vacuums the walls of her new house.

Alysha and her daughter stand outside the home’s impressive wood-carved front door.

While the family plans to preserve the house’s 1970s vibes and many of its original features, they do have plans to freshen up the space and do away with certain elements, like the 50-year-old carpet, Alysha explains.

“For instance, we’re going to put in pure white quartz countertops. The lighting will need some updating, too, because it’s pretty dark in there,” she says. “We’re also replacing the shag carpet with a material called Marmoleum that’s going to be more eco-friendly and easier to clean.” 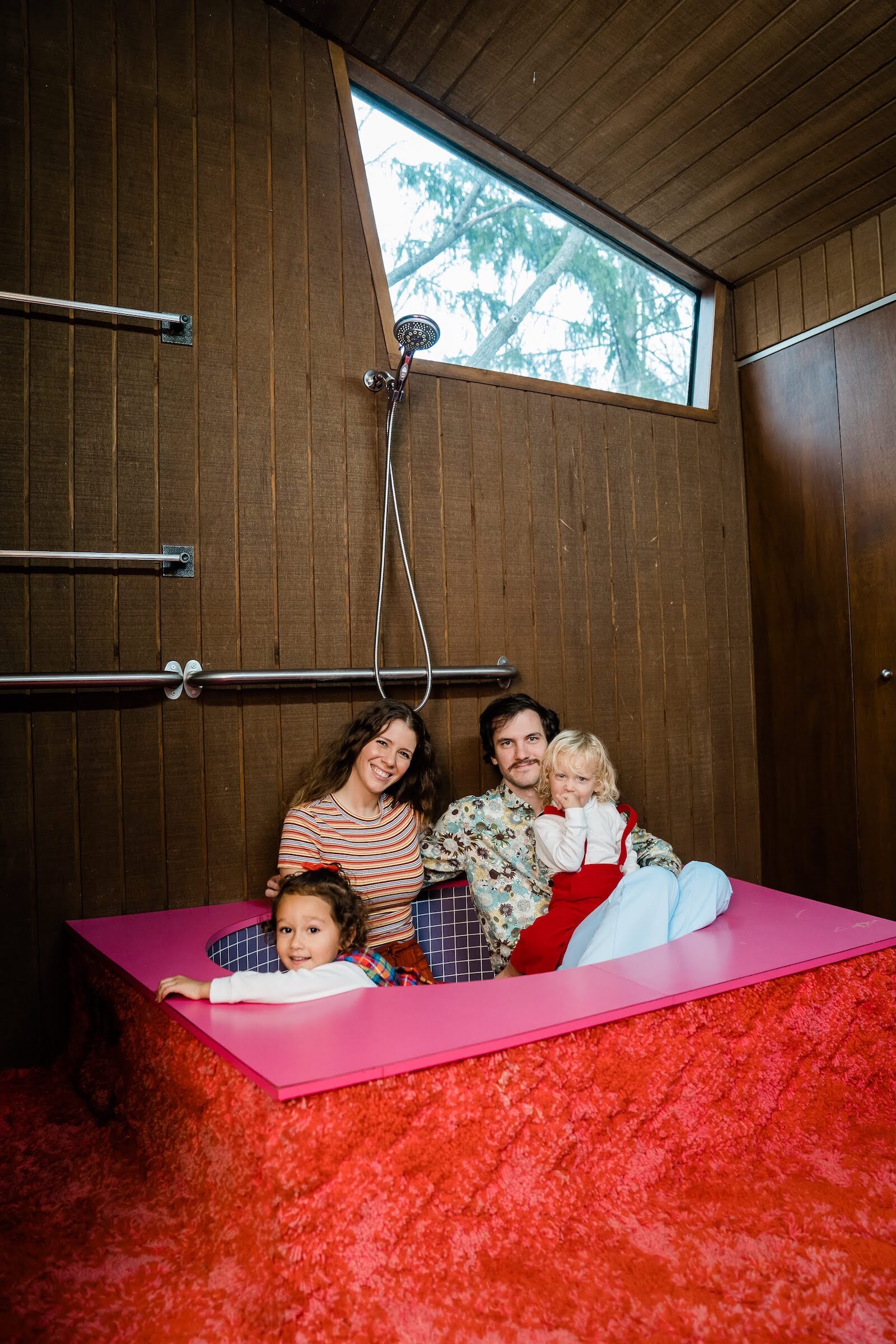 Alysha and Nate Jackson with their children in the shag-covered tub.

While renovating a home has many practical considerations, it hasn’t stopped the couple from having some fun in the process. The Jacksons donned 1970s-era garb for a family photoshoot with Fort Wayne photographer Dustin McKibben of Dustin & Corynn Photography, which further galvanized the internet.

“It was just a fun thing to do,” Alysha says. “We thought it’d be fun to celebrate how the house is now and have the memories as a family before we start renovating.” 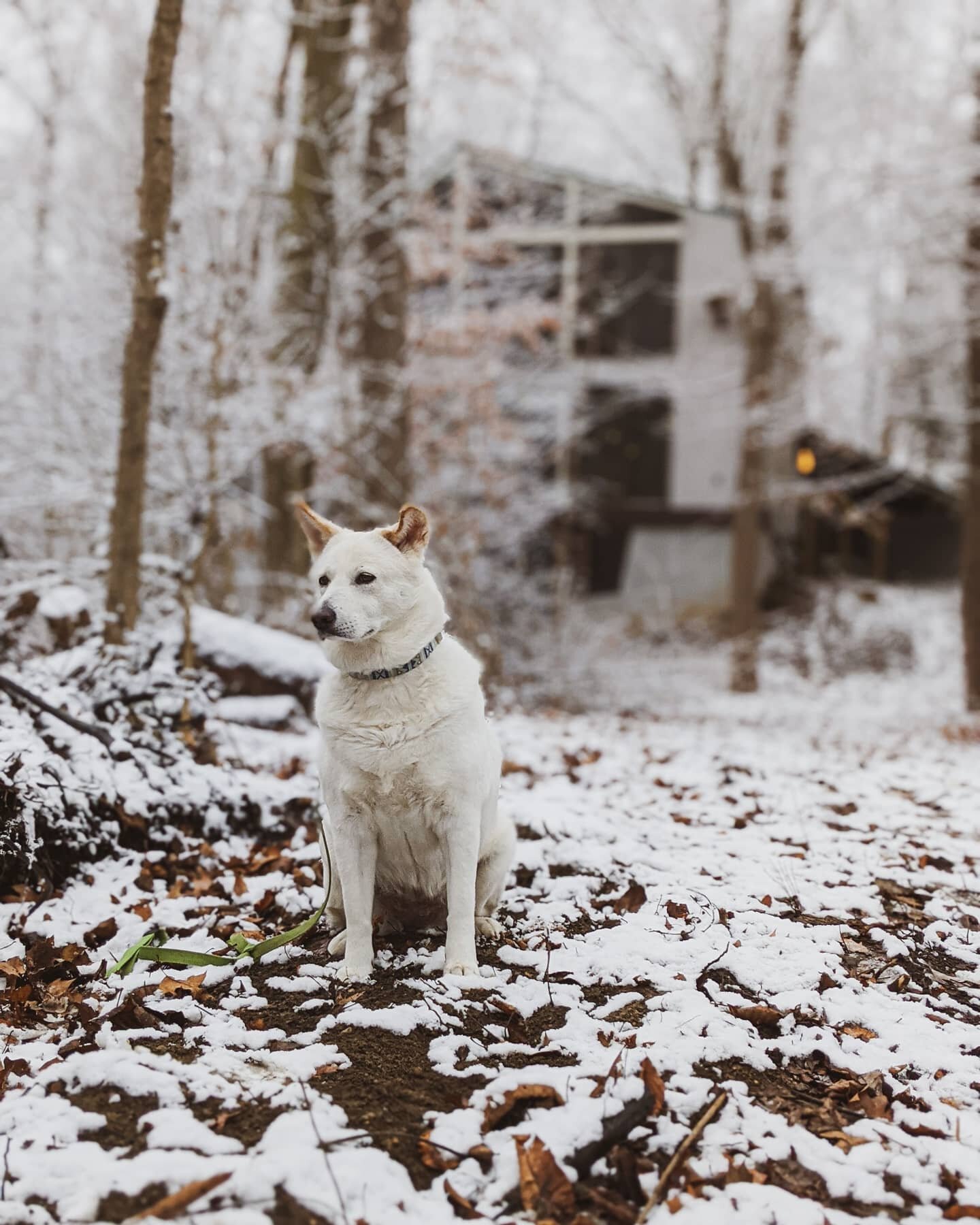 The Jackson family dog outside the wooded property.

The 70s family photos, real estate photos, and video in this story were provided by Dustin McKibben of Dustin & Corynn Photography.