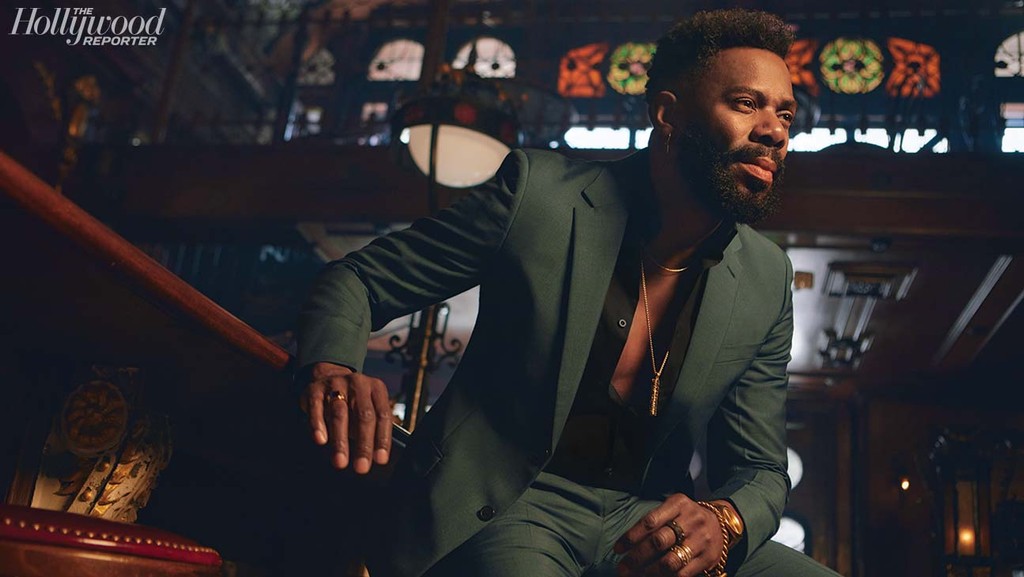 The ‘Euphoria’ actor and nightlife investor talks about his love for all things ’60s and ’70s, from his midcentury home to gold chains and unbuttoned shirts: “That’s exactly who I’ve become.”

After nearly three decades as a character actor — “You do your work and go home,” he says — Colman Domingo is enjoying a breakout moment. An Independent Spirit Award nominee for Ma Rainey’s Black Bottom and a series regular on Euphoria and Fear the Walking Dead, Domingo, 51, also is the host of his own 20-minute interview and cocktail-making program, AMC’s Bottomless Brunch at Colman’s.

The year-old show, whose guests have included directors Radha Blank and Victoria Mahoney, is now in its third season. He films it via video chat from the midcentury modern home he shares in Southeast L.A. with his husband, Raul Domingo, who runs their production company, Edith Productions.

The Philadelphia-born actor —who next appears in the Michael B. Jordan-starring thriller Tom Clancy’s Without Remorse and stars in the upcoming films Zola and Candyman — spoke with The Hollywood Reporter about his many interests that lie beyond acting, especially 1960s/1970s architecture and decor: “I’m kind of a purist.”

How did you get into midcentury modern design?

It’s a whole culture thing for me in terms of ’60s style of dress and attitude and socializing. The ’60s weren’t a wonderful time for a lot of people, but when it comes to style, I started to do a deep dive into all of it. I make sure pretty much everything in my home is either an original piece from between 1964 and 1972 or an inspired piece. I want the furniture to match the home.

Three years ago, I found a beautiful 1964 home, built by a contemporary of John Lautner named Jules Salkin. I was house hunting for six months. When I pulled up it really felt like I was home. I’m the first owner after the original owners. It was built by a Jewish doctor and his wife. They lived here all their lives. When I found it, I wanted to take on the responsibility of loving it as it’s been loved. I didn’t want to change it. It has a cantilevered ceiling, a sunken living room and my built-in bar with the original Formica. And I have the same mosaic tiles in my bathroom that are used in Terminals 3, 4 and 6 at LAX [see below]. You’ve seen [the LAX tiles] in The Graduate, on Mad Men. They are my pride and joy.

What decor items are you obsessed with?

A Herman Miller Eames chair, a midcentury modern Nelson wall clock, Saarinen table and chairs, and Michel Ducaroy Togo couches. And I love to accessorize with items from CB2 and Jonathan Adler. I’ll have a scratchy Miles Davis record playing.

What are your must-have fashion items right now?

Gold accessories — rings, necklaces and sunglasses. And a bucket hat and a mask as of late.

Do you like timepieces? If so, what’s your go-to everyday watch and favorite dress watch?

I do! I wear a 1946 Rose Gold Rolex for special events, a gold Bulova for dress, and a gold Swatch for everyday.

Do you have a favorite vinyl store?

Crème Tangerine Records in the LAB Mall in Costa Mesa.

You’re an investor in the DTLA bar The Wolves (set to reopen in the summer). How’d that come about?

One of my comrades on Fear the Walking Dead, assistant director Isaac Mejía, told me about this bar he was investing in and building. I loved the whole philosophy. It looks like a Prohibition-era bar. The ceiling was imported from an old train station in Illinois. Everything has a history to it. They wanted a place where people feel inspired to dress up.

And what are some great items to have for an at-home bar?

Bitters, Bulliet rye whiskey, a good scotch and a smoker.

What are some of your favorite L.A. spots with inviting outdoor dining?

How do you describe your style?

I never thought I would be a Ralph Lauren type, but I’ve really grown into that. I love rugged denim and a nice leather belt. I double denim all the time; I’m all about the Texas tuxedo. My friends joke that I unbutton at least three to four [shirt] buttons. I’m a 1969 baby. In the ’70s, I watched older men who wore their shirts unbuttoned with these gold chains, and that’s exactly who I’ve become. When I dress up for formal occasions, I always feel I should look as comfortable as if I would be by a fireplace with a glass of scotch.

What are your essential skincare products?

Interview edited for length and clarity.

A version of this story first appeared in the March 31 issue of The Hollywood Reporter magazine. Click here to subscribe.