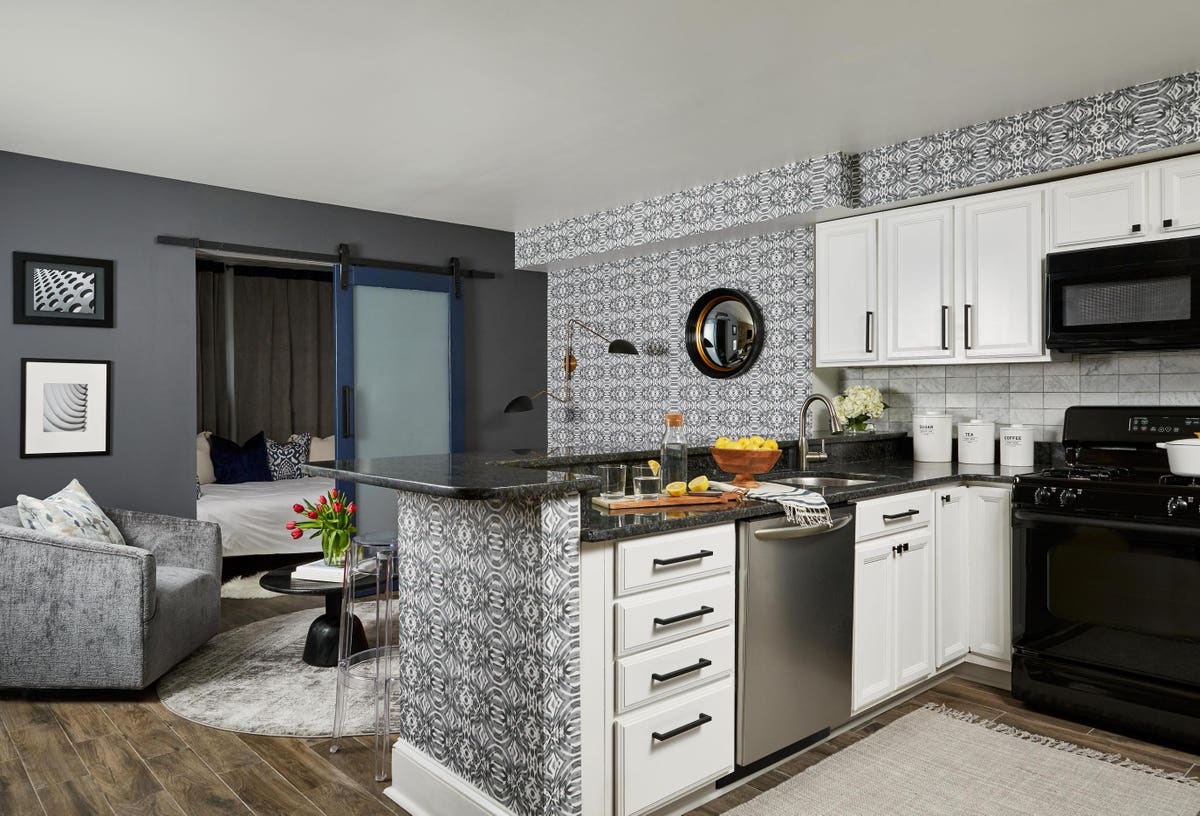 It’s not everyday that you get the opportunity to design the home of a former jazz legend, especially Duke Ellington. So when Joy Williams, founder of Chicago-based boutique design firm Joyful Designs Studio, received a call from a friend to help redo the English basement in her Victorian brownstone, she was thrilled.

Williams was intrigued by the history of the home, currently owned by her friend and a fellow HBCU grad. Ellington and his parents lived in the home from 1922 to 1923, and supposedly he lived in more than one home on this block before he went to New York and made a name for himself.

“The property was built before 1890, but because D.C. burned down before that, they only have records beginning in 1890,” Williams says of the home.

When it came to designing the space, she wanted to honor the foundation of the home, like keeping the beautiful exposed brick, but adding modern elements that made the room pop. The owner hopes to use the 900-square-foot apartment for entertaining, as a guest bedroom for her parents and renting it out to short-term tenants. The English basement already had one bedroom, a kitchen and a living area, but Williams thought to add a sliding glass door to break up the living area and a small nook so it would feel like two separate rooms.

“When we were laying out the design plan, because she wanted an extra room, the only place we could put it was at the front of the house, which has several windows,” she says. “We used semi-custom curtains to hide those because it took away from the space.”

Williams’ client leans more traditional and somewhat masculine in style and wanted to stay within a blue and gray color palette. Williams, who is passionate about color and textiles, kept a masculine, yet visually interesting feel with a beautiful gray-hued wallpaper print she calls “a good fusion of British design, which adds a great masculine element.”

“I wanted to bring a dynamic element, which was the wallpaper,” she says of the bespoke-style wallpaper from Black woman-owned business Mitchell Black in Chicago. “My client probably wouldn’t have picked that wallpaper for herself if she had to choose, but she loves it. She says when people walk in the room, that is the first thing they comment on.”

In the living room, Williams wanted to add a bright red contrast to the blue and gray color palette with the red CB2 pull-out sofa, which also allows for the client to sleep more guests. The overall design of the space is contemporary with beautiful brass light fixtures, mirrors and a gorgeous textural rug.

The biggest challenge of redesigning the space, however, was updating the outdated floors, kitchen and walls on a mid-size budget. In the kitchen, Williams painted the cabinets white and added a tiled marble backsplash. The biggest impact was changing the flooring by adding porcelain tiles and wood-look flooring throughout.

“Her kitchen was already there,” Williams says. “She did not have it in her budget to actually do a full new kitchen, because we would’ve made that smaller actually, and given more space to the living room.”

For the bedroom, Williams wanted to make it feel like a hotel room by adding custom shades on the windows, a tufted headboard, marbled table lamps and cozy white bedding with striped pillows. She also repainted the room a stunning navy hue to keep with her client’s color palette.

In all of her projects, Williams tries to source furnishings or textiles from Black-owned businesses or from a line they have with other furniture makers. This project in particular was exciting for Williams, as she worked with an all-women crew, including the client and photographer Keyanna Bowen. She and the women also all attended HBCUs.

“I knew that would be important for my client because she’s a Black-owned business herself, and I am too,” Williams says. “There’s an unspoken camaraderie when you go to an HBCU. The fact we all went to HBCUs, and I was able to use textiles from a Black woman-owned business based in Chicago, it was a great project.”

Up next, Williams is planning a renovation of the upstairs in the same Victorian brownstone at this beautiful, historic home.