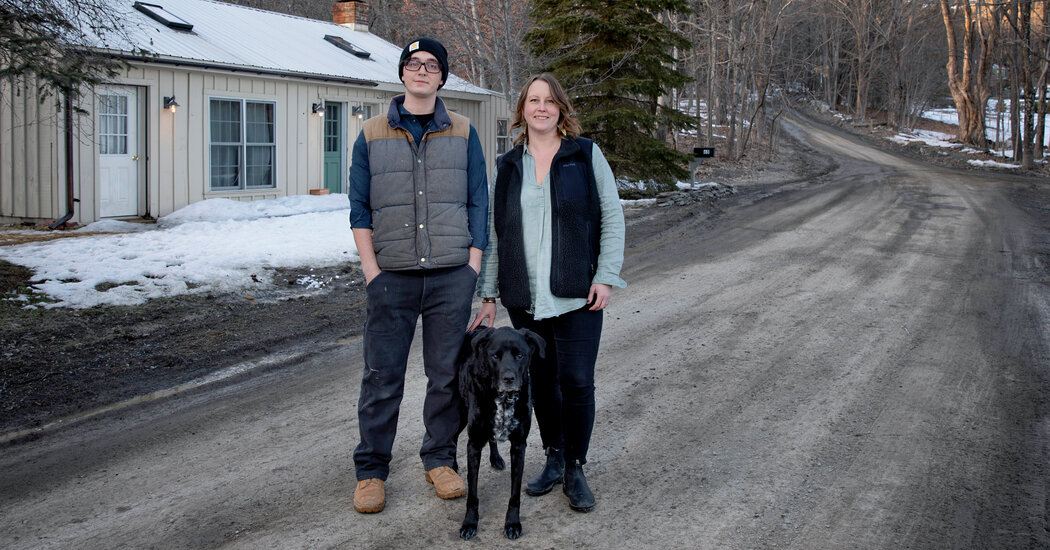 Meghan McCann, a sales representative for a wine and liquor company, has spent more than a year looking for a house in Columbia County, in the northern Hudson Valley, where she was born and raised.

Ms. McCann, 39, who grew up in Copake Falls, less than 10 minutes from the town of Hillsdale, where she currently rents with her fiancé, Joseph Walters, said she was preapproved for a $270,000 mortgage, but “it wasn’t enough.” Every house she and Mr. Walters looked at sold within two weeks for prices that beggared belief.

Now they are budgeting up to $350,000, or maybe more, in hopes of finding a small property on a few acres that they expect will probably have foundation problems or a leaky roof. Though it helps that Mr. Walters is in construction, this wasn’t what they had bargained for.

“We don’t want to have to do a lot of work,” Ms. McCann said, pointing out that the cost of building materials has recently skyrocketed, making a fixer-upper a more serious investment. “We want to go out to dinner and take vacations.”

As the real estate market remains on a boil in New York’s Hudson Valley, heated in large part by second-home buyers re-evaluating their commitment to urban living, longtime residents are experiencing both prosperity and pain.

A wave of newcomers, drawn by the painterly beauty and burgeoning craft and food culture of this region, are helping to sustain local businesses, allowing bars and shops to flourish, and keeping construction companies and maintenance crews active.

At the same time, they are vacuuming up much of the available housing, leading to bidding wars and inflated prices. The ambitions of many second-home seekers from outside the area are frustrated, but so are the desires of locals looking for primary residences. Houses listed far above their appraisal values sell to buyers with suitcases of cash. Property taxes threaten to rise. Hearts break. Lives are disrupted.

Patricia, a 55-year-old nurse who lives in Rockland County, in the southern Hudson Valley, and who asked that her last name not be divulged in case it scuttled her chances of buying a house, was so confident that she could find the upstate home of her dreams that she and her husband sold their farmhouse in August before completing their search.

They wanted a historic property in turnkey condition with at least two acres and a swimming pool. Now, after combing through listings and submitting half a dozen bids — all rejected — they are resigned to settling for a fixer-upper that breaks their $650,000 budget. They have until May — when the new owners take possession of their Rockland County house — to find it.

Ten New York counties make up the Hudson Valley, from Westchester to Rensselaer on the east side of the river, and from Rockland to Albany on the west side. From January 2020 through January 2021, the average median sale price of a home in Columbia County, where Hillsdale is located, rose 13.6 percent, from $266,250 to $302,500, according to the New York State Association of Realtors. (This is close to the national median sale price as of January of $303,900, a year-over-year increase of 14.1 percent.)

In Dutchess County, just south of Columbia County, the median sale price rose 30.3 percent through 2020, arriving at $358,250 in January.

As with overheated markets throughout the country, these price hikes reflect a diminishing supply. In that same period, the average number of residences for sale in both Columbia and Dutchess counties dropped 37 percent, as owners clung to their homes as refuges, rented them at juicy rates or realized that they could sell at a profit, but then where would they go?

Robert Bradway, who owns a plumbing and heating business in Hillsdale, said he knows people in the community who have chosen to cash out and move as far away as South Carolina. “If I was on the brink of wanting to go somewhere else, it would be the time,” he said.

But Mr. Bradway, 38, is running a surging business, thanks in large part to the second-home community. In the first, cold months of the pandemic, he got houses ready for owners who planned to use them as shelters and wanted to cram in extended family members and friends. Mr. Bradway had to install bigger hot water heaters and replace sewer lines to support the overload.

In summer, he was busy with air conditioning. Through the fall and into winter, he repaired frozen pipes in houses where absent owners neglected to turn off the water, and set fixtures for increasingly large and lavish new builds.

He said he is thankful but somewhat weary. His team of seven, including him and his wife, Rachael, went from 40-hour to 80-hour workweeks in March “and never looked back.” Eventually he added three people, but it was still not enough to meet rapid demand. Some of his newer clients have shown little tolerance for delays, he said, chalking up their impatience to a lack of familiarity with the town and its rhythms, and possibly to pandemic-related stress.

“There would be no problem growing the business to twice or three times what it was if the employees were here,” Mr. Bradway said. But “it’s tough in this area to find qualified help for what we do.”

West of the Hudson River, in the tiny Ulster County hamlet of Accord, Jacob Meglio also has found profit — and some ambivalence — in the influx of newcomers. Mr. Meglio, 32, is a co-founder and managing partner of Arrowood Farm, a brewery and distillery that grows much of the produce it uses and was able to keep its bar open this winter for the first time in five years of operation.

Born in nearby Kingston and a citizen of Accord, he views this windfall through a double lens. The pandemic has been “great for business, but challenging for the people we care about,” he said.

“Airbnb’s the third rail around here,” he noted. “People either own one or they don’t, and they begrudge each other because of it.” From the business side, Airbnbs are a boon — the renters often patronize his bar. From the community side, the price of houses that used to rent for $1,000 have quintupled, “and it’s totally inaccessible for regular folks.”

Mr. Meglio pointed to a long-term trend of urbanites discovering the Hudson Valley. His own parents moved from New York City in the late 1980s, and there was a large wave after 9/11. Like many of his peers, he left Ulster County to attend college and have a look at the world, returning in 2012.

The area has always had poverty, he said. What is different now is the number of working-class people who are struggling to find affordable housing. And some of his peers who moved away would like to repatriate but are shut out of the market. (The median sale price in the county in January was $275,000, a year-over-year increase of 14.6 percent; at that time, there were 682 homes for sale, a year-over-year decline of 42.3 percent.)

“It’s not so much that change is happening, but that it’s happening so fast. What is the collateral damage?” Mr. Meglio asked.

The Housing Action Plan, a report released this month by Ulster County, describes a crisis that was years in the making but sharply exacerbated by the pandemic. It found that in two-thirds of the county’s municipalities, a family earning “a typical income” could afford fewer than 10 percent of the homes that were on the market last fall. Among its recommendations is investigating scattered sites and buildings that could be developed and repurposed for residential use. Next year, construction will begin where a jail now stands in Kingston to create 80 units each of senior and work force housing affordable to people making between 30 and 130 percent of the median income in the area.

Tod Wohlfarth, a creative marketing director who moved into his weekend house in Hillsdale in 2014 and has been active in Democratic politics in both the town and Columbia County, acknowledges a persistent divide between the haves and have-nots. It dates, he said, from more than a century ago, when the Hudson Valley was a refuge for New Yorkers fleeing outbreaks of cholera and yellow fever. It accelerated in the last eight years, after the economic downturn diverted wealth to the region from places like the Hamptons and Martha’s Vineyard. And it is sustained by high-speed internet, which has allowed people earning their living beyond the community to remain and work remotely in what is often a bubble.

But Mr. Wohlfarth, 50, who labored to bring broadband to Hillsdale, believes remote work is its future. He also dreams of more vocational training for area job seekers, a transfer tax that could be diverted to finance affordable housing, and a mentorship program at the schools that would bring together some of the highly successful part-timers with the local population. “If you have a community that’s really only here Saturday and Sunday, there’s a disconnect, he said. “They don’t feel invested.”

A lack of emotional investment is what Patricia, the nurse in Rockland County, fears from her competitors in the market for antique homes. Given how tetchy an old house can be, she was surprised to find herself competing with so many eager bidders. Were the properties being scooped up out of desperation? Would the buyers gut their interiors to make them over in the image of the houses they couldn’t find? Would “these treasures,” as she described them, end up looking like everything else?

And what will she do if she doesn’t secure her own treasure by May? “We’ll put our stuff in storage and maybe rent a motor house and camp out on my nephew’s lawn,” she said.