Home design inspiration: A clever way to hide the TV 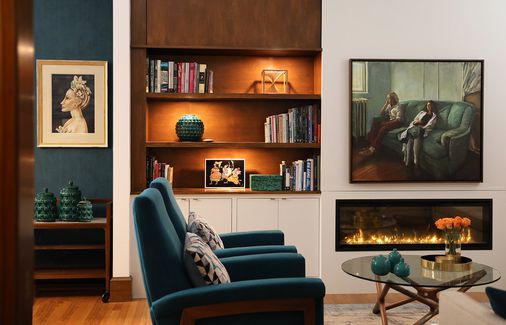 In order to age in place and maintain their psychology practices, Mariette Hedeshian’s clients reconfigured the ground level of their two-family in Cambridge to function as both their home and their office. “For many years, they lived on the second floor and worked on the first,” says Hedeshian, principal of Designer’s Touch in Shrewsbury. Since there wasn’t enough square footage for a separate media room, Hedeshian hid the television behind a sliding panel above the fireplace. “They entertain often and did not want a TV to be a focal point in the living room,” she says.

1 Architect Richard C. Tremaglio’s design called for taking down a wall to create an open concept layout. To visually differentiate the dining area, Hedeshian used a fabric-like teal wall covering. A portrait from an antique shop in Maine hangs above the bar cart.

2 When possible, Hedeshian designed around furnishings the couple already owned. But she added a pair of teal recliners from Circle Furniture that offer utility, comfort, and style. The color ties to the wall covering in the dining room.

3 Gomaa Construction crafted the birch built-ins, stained to match the existing woodwork that was removed during the renovation and meticulously reassembled. “They wanted to retain the home’s original charm,” Hedeshian says.

4 A painting by Neill Slaughter is mounted on the panel that hides the television. “The panel is attached to a mechanism that lets it slide in front of the bookshelves in either direction,” Hedeshian explains.

6 The six-pointed star frame of the coffee table ties to the walnut frame of the recliners. “We needed something small and airy, and the wife likes mid-century modern style,” Hedeshian says.

Marni Elyse Katz is a regular contributor to the Globe Magazine. Send comments to [email protected]