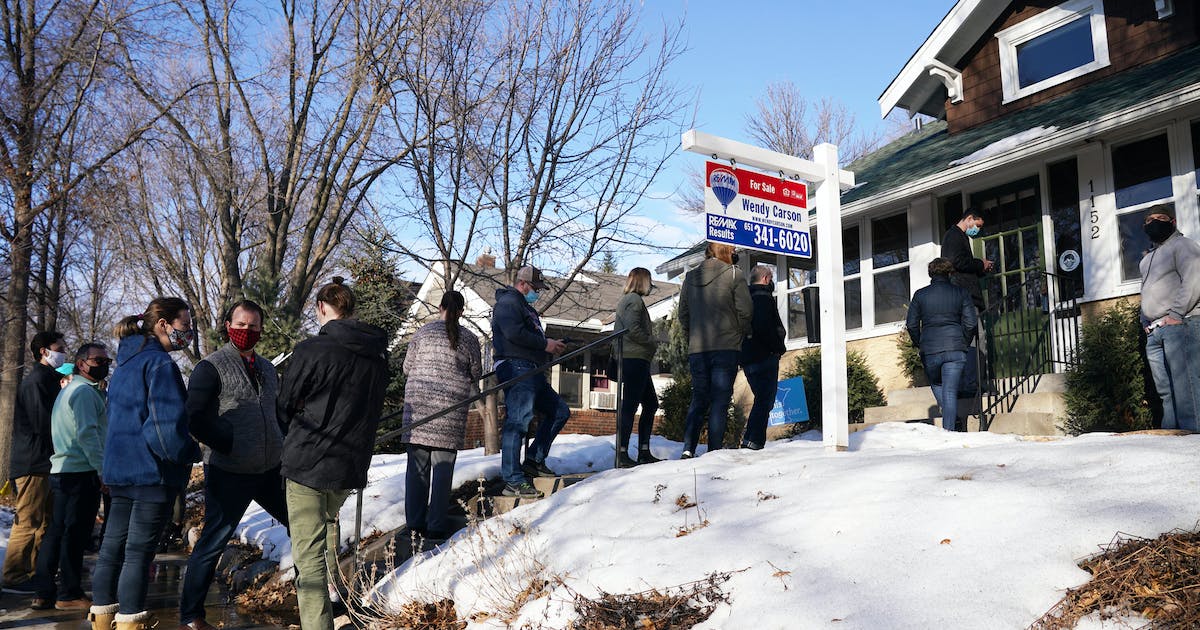 Rachel Scarrella had no doubt the new windows and furnace and first-time buyer-friendly price would make the 1970s home she recently put up for sale in Oakdale a hot commodity. She never guessed it would fetch 170 showings and 56 offers.

“It was a madhouse,” said the North Oaks-based real estate agent.

No surprise, she said, that most of the buyers were willing to pay tens of thousands of dollars more than the $225,000 list price. What was unusual: At least half of those nearly 60 bidders were so desperate to be the winning offer that they sweetened their pitch by waiving their right to have the house professionally inspected for defects before closing.

“That’s a risky card to play,” said Scarrella. “But a lot of people are doing it right now.”

Facing fierce competition this spring, buyers are doing far more than paying more than the sellers’ asking price. Among other assurances that the deal will close, many buyers are waiving the right to an inspection that gives them the opportunity to back out or renegotiate a deal if the house has an unknown or undisclosed defect. They are also offering other concessions to the seller that are aimed at making their offers stand out.

“We’re throwing everything against the wall,” said Nate Pentz, a Twin Cities agent. “You have to be creative.”

With Realtor.com reporting some 40% fewer houses for sale in the Twin Cities compared with last year, nearly 70% of all buyers were involved in a competitive bid situation in January, nearly twice the rate as the month before, according to an analysis of Redfin offers.

Still, waiving financing and inspection contingencies is a bad idea, say many Twin Cities brokers, so agents and their buyers are getting creative.

Pentz said of the 101 transactions he was involved with last year, not one ended up skipping an inspection altogether. “I have a hard time advising a client to skip an inspection,” he said.

Instead, he’s employing other tactics. That includes increasing the earnest money and making it nonrefundable after an inspection. He’s offering sellers a preferred closing date, the option to rent back the property and a pass/fail inspection that’s conducted more quickly than normal.

And a growing number of buyers are including “escalation clauses” with their offers that say they will automatically pay more than the highest bid up to a certain amount, Pentz said.

Waiving inspections is a particularly appealing option to sellers these days because it gives them the confidence that an unknown problem won’t give the buyer an excuse to back out or renegotiate the purchase price.

Karli Hughes was willing to take her chances. By the time she and her husband saw a house in Plymouth that had just come on the market, she was poised to pull out all the stops to make the best offer.

With a 3-year-old and a dog, she and her husband had outgrown the home they had owned for 11 years. After quickly selling their home, they had 90 days to find a new one.

But after making contingent offers on three houses and being outbid each time, they were getting desperate. “Each time was pretty extreme,” she said.

In one case, a buyer waived the inspection and offered an eye-popping $50,000 more than the list price. On another, the winning buyer paid cash.

So when they spotted an online listing for a one-owner house in Plymouth, they not only offered without seeing it first, they waived the inspection on the day before it hit the market.

“The photos showed how beautiful the home was,” she said. “You could really tell the homeowner had taken good care of the home.”

Hughes said they discussed the risks with her agent but decided to do it. The sellers were flattered that the family was so enamored of their house, she said, so they offered to let them see the home in person before signing the paperwork. In the meantime, they got another offer.

“I think waiving the inspection was key in us getting the home,” she said. “We don’t have any regrets.”

Mike Vanderheyden, general manager at RE/MAX Results, said such situations don’t always work out. He said agents are coached to encourage buyers to employ all protections available to them and cites the NAR Code of Ethics, which requires that all agents have a fiduciary duty to promote the interests of their clients in any offer negotiation.

“So no matter the market conditions, our sales executives believe that including a home-inspection contingency when working with buyer clients is in their best interest and we communicate that very clearly,” he said. “However, as is always the case, the client [buyer] will decide whether to accept the advice given or choose to make a different decision and accept a higher level of risk by forgoing the inspection.”

Often, buyers go against their agent’s advice. And that’s why Reuben Saltzman, a Twin Cities home inspector, said agents have been “begging” him to come to offer a quicker alternative to a traditional post-bid inspection.

His company recently started offering half-hour walk-through consultations with buyers and their agents during the initial showing. Unlike a typical inspection, there’s no post-inspection report and buyers are asked to take notes.

Saltzman said the consultations are developed with input from agents and inspectors, along with the company’s attorney and insurance company, to be sure the company is making clear that the service isn’t a full-fledged inspection.

Those walk-throughs don’t include an in-depth examination of a home’s systems and structure or any of the equipment that’s typical. The inspectors don’t climb ladders to examine roofs, remove the electrical panel cover or use a combustion analyzer on the furnace.

“We’re drawing a very clear line in the sand between a walk-through and an inspection,” he said. “It’s going to be limited, but it’s a heck of a lot better than nothing.”

Stephanie Hays, a Twin Cities real estate agent, said buyers who waive inspections in areas where there are a lot of older houses, where problems are easily concealed, are especially vulnerable. That includes Minneapolis, where substandard sewer lines are a common — and expensive — problem.

“If someone wants to waive the contingency, that’s a great advantage for the seller, but out of human kindness and consideration [for the buyer] you don’t want to be in a situation in three months where a buyer comes back and says my roof fell in.”

She’s a member of the Minneapolis Area Realtors state professional standards committee and said the issue has been a hot topic. She has another strategy. She asks sellers to hire their own independent home inspector to produce a full-fledged report that she gives to every prospective buyer. She also “strongly discourages” people from making an offer without first seeing a house. She said half of such deals fall apart.

“I see people doing some really crazy things in the market right now, people literally get caught up in the frenzy, but how can that not yield some kind of regret?” she said. “Buying homes isn’t for babies,”