He’s running for New York mayor as a real estate foe. Why do some developers support him? 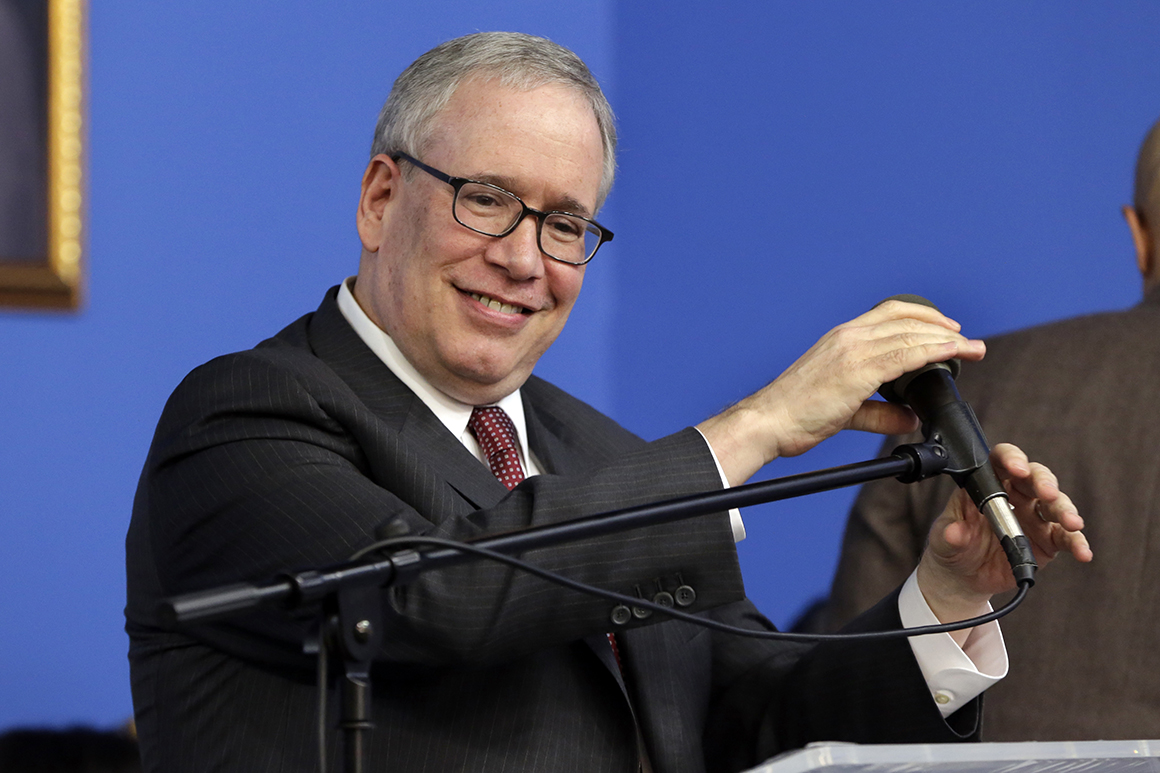 “I don’t place a lot of weight on the whole issue of whether a candidate is accepting money from real estate or not,” REBNY’s Whelan said. “He’s in campaign mode now.”

Comfort with Stringer extends to the Partnership for New York City, an organization representing Wall Street firms and other large businesses. “Regardless of his politics, real estate needs somebody that understands in deep detail what their constraints are,” said Kathy Wylde, president of the organization. “And Scott does.”

He willingly accepted the now-taboo campaign money until reversing course two years ago, papering over past real estate contributions with a promised “movement supported by New Yorkers from all walks of life,” according to a December fundraising pitch titled “Big money is against Scott.” But he is not returning any of those earlier contributions, which are now shoring up his frontrunner campaign.

Stringer’s financial backers include a who’s-who of luxury condo developers: William Lie and Arthur Zeckendorf built 15 Central Park West, a luxury high-rise featuring an in-house chef and lap pool that caught the eye of Lloyd Blankfein and Denzel Washington, who bought homes there.

Property Markets Group is erecting a 1,500-foot condo tower on Billionaires’ Row south of Central Park, and Alchemy Properties converted the upper floors of the Woolworth Building into opulent homes.

Stringer also rolled $1.4 million from his 2017 campaign account for comptroller into his mayoral war chest. Former REBNY Chair Bill Rudin raised $9,900 for that race, while chipping in $400 himself — the limit for anyone with business dealings before city government Developer Aby Rosen, who bought the Chrysler Building in 2019, raised $43,800.

And Jordan Barowitz, an executive at the dynastic Durst Organization, raised $24,750. Among Durst’s residential portfolio is a triangular building along the Hudson River that was designed by famed Danish architect Bjarke Ingels to maximize sunlight in every unit.

Reached by phone, Barowitz said, “Real estate is a critical component of New York’s civic ecosystem. The industry was vital to the city’s reemergence from fiscal crisis, terrorist attacks, and natural disaster and needs to be the next mayor’s partner on pandemic recovery.”

During his eight-year stint as Manhattan borough president, Stringer recommended the city give the green light to the pyramidical Durst project, a parking garage for 15 Central Park West and Rudin’s controversial residential project at the former St. Vincent’s Hospital.

Three people working in real estate and politics at the time recalled him as a pragmatist; his land use decisions — which generally supported proposed developments but suggested conditions to appease opponents — reflect that assessment. Stringer’s inclination for consensus was on display when he recommended the city go forward — albeit with modifications — with sweeping rezonings in Hudson Square, Midtown East and at Columbia University’s Manhattanville campus.

Stringer’s team said he is not swayed by real estate donations, and described a 30-year history of supporting tenant-friendly measures, such as stricter rent laws when he was a state lawmaker in the 1990s.

“Over the last few years, watching the power of big real estate money to hang on to billion-dollar tax breaks like 421-a and fight vital changes to our rent laws, Scott rethought whether any candidate who stands with tenant activists should accept contributions from developers anymore, especially those running for mayor,” spokesperson Tyrone Stevens said in a statement. “So he decided not to.”

His shift coincided with a leftward political movement that lay blame for income inequality across the five boroughs at the feet of developers and landlords.

After Ocasio-Cortez routed a congressional powerbroker with a real estate-free campaign, others followed suit, including City Council Speaker Corey Johnson, who at the time posed a threat to Stringer’s ambitions. Johnson has since dropped his own mayoral bid.

The change wasn’t just financial: After years of attending REBNY’s annual January gala alongside most New York politicians, Stringer joined them in skipping it in 2019, six months after Ocasio-Cortez’s victory. As titans of the industry mingled at the black-tie affair that night, he opted for a Queens community board meeting with state Sen. Jessica Ramos, a progressive Democrat who is supporting his candidacy, according to his public schedule.

Other mayoral candidates, such as Brooklyn Borough President Eric Adams and Wall Street executive Ray McGuire, have expressed no reservations about taking cash from the real estate industry.

While publicly implying he will pose an obstacle to that sector, Stringer is privately adopting a more conciliatory approach, according to interviews with seven people in the business who have direct knowledge of his comments.

In meetings with developers over the past two years, when pressed on his public posture, he has said he needs to pivot left to win the primary, they said in recounting the talks.

One person said Stringer told frustrated real estate executives, “Let me get through the primary.”

“Given his past reversals on any number of issues in service of perceived political expedience, everyone understood that Scott was going to do whatever Scott thought best served his electoral prospects at any moment,” the person said.

Another person familiar with these conversations said, “He tells them, ‘Don’t worry — it’ll be different when I’m mayor.’”

“He was like hounding you for money for his filing, then he announces he no longer accepts money from the industry,” a third person said. “Even for this crew it was a little eye-raising.”

And a fourth said, “There’s something inherently contradictory about someone who says: I’m a liar, but trust me.”

Whelan and Wylde disputed that Stringer backpedals his public comments in private conversations.

And what some consider hypocrisy, others called smart politics.

“I think this is a rare instance where campaign politics actually mirror a smart governing strategy,” said former de Blasio spokesperson Eric Phillips, who is not working for anyone in the mayor’s race. “You can’t govern in the pocket of real estate and you can’t govern by broadly vilifying real estate.”

Stevens disputed the notion that Stringer is inconsistent.

“Scott is, and always has been, both proudly progressive and proudly reasonable,” he said in a prepared statement. “It may come as a shock to some that progressives are, in fact, reasonable.”

He pointed to a housing platform that makes most developers cringe: mandating affordable housing in all development, swapping City Hall deals with REBNY members for smaller nonprofits and ending a controversial property tax break the industry views as essential to creating rental housing.

State Sen. Julia Salazar, who belongs to the Democratic Socialists of America, is among Stringer’s most ardent supporters. In a recent interview, she applauded his ability to bridge the divide between the far left and the real estate industry, and said his progressive bona fides are apparent in his platform.

“It doesn’t worry me that they have some kind of working relationship with Scott, given that he has been in politics for so long,” she said.

Those same housing proposals, which he unveiled in a speech condemning the “gentrification industrial complex” last year, earned widespread scorn among housing experts — previewing the difficult path that would await him if he won.

“There is no world in which you can pass a law that would require every single building to have homeless people in it. There is no planet on which that would happen,” Alicia Glen, de Blasio’s former deputy mayor for housing and economic development, said in an interview.

She said the policy would violate constitutional law that says private property cannot “be taken for public use, without just compensation.”

Stevens argued that Stringer’s proposal would not violate the “takings clause” of the Fifth Amendment and said it mirrors policies put forth in Portland, Ore., and San Jose, Calif.

“There are those who throw around the word ‘taking’ as an all-purpose argument against any change to the status quo on real estate development,” he said in a prepared statement. “It’s bogus spin disguised in legalese. The reality is that courts have consistently upheld affordable housing requirements like what Scott is proposing, and the Supreme Court has let those decisions stand.”

Stringer’s approach to real estate, underscored by his opposition to the city’s failed deal with Amazon to build a headquarters in Long Island City, is following him on the campaign trail

During a recent interview, 92nd Street Y CEO and former real estate official Seth Pinsky pressed him on his implication that the industry is “so toxic” that he had to swear off its money.

“I have never taken a contribution and felt I was obligated to do anything. But there’s a lot of people in this city who would like to see a mayor who is just unencumbered by monied interests,” Stringer said. “If you have issues, you can’t get your arm around it because I won’t take your $2,000 contribution, you’ll get over it real fast when I’m elected.”