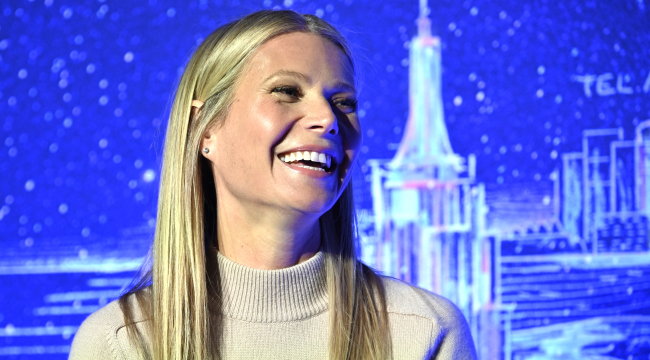 A Texas man named Colby Watson has filed a class action lawsuit against Gwyneth Paltrow’s Goop Inc. over a candle he bought from the company called This Smells Like My Vagina.

The 10.5 ounce candle, which sells for $75 and is currently sold out, allegedly became “engulfed in high flames” and “exploded” in his bedroom filling the room with smoke.

Watson claims in the lawsuit that he purchased the candle as a “personal home decoration” in January and lit it “the way in which a reasonable customer would expect to utilize a candle” in February.

After being lit for “an estimated three hours or less” it allegedly damaged his bedroom nightstand when it burst into flames.

Related: The Internet Roasts Gwyneth Paltrow After Revealing She Broke Down And Ate Bread During Quarantine

He claims that despite the “limited warning” on Goop.com about not burning the candle for more than two hours at a time, Goop “knew that the candles were defective.”

Watson’s lawsuit, filed Monday in U.S. District Court for the Central District of California, comes on the heels of another report which also claimed the This Smells Like My Vagina candle exploded, started a blaze in a woman’s living room.

“The candle exploded and emitted huge flames, with bits flying everywhere,” 50-year-old Jody Thompson of the United Kingdom alleged back in January. “I’ve never seen anything like it. The whole thing was ablaze and it was too hot to touch. There was an inferno in the room.”

Watson is asking for a jury trial and seeks triple compensation as well as punitive damages of more than $5 million for him as well as others in the suit who “experienced and/or will experience significant damages, including but not limited to mental anguish and/or physical injuries, loss of the use of their candles, time spent seeking to have their candles replaced, and money lost on the purchase of new, safe candles.”

Related: Gwyneth Paltrow Gets Dragged For Implying People Started Wearing Face Masks Because She Did

Goop has responded to Watson’s lawsuit, telling TMZ, “We’re confident this claim is frivolous and an attempt to secure an outsized payout from a press-heavy product. We stand behind the brands we carry and the safety of the products we sell. Here, Heretic — the brand that supplies the candle — has substantiated the product’s performance and safety through industry standard testing.”

Paltrow’s Goop company settled a previous lawsuit about one of their products in 2018. That suit was brought by California’s consumer protection office for making and promoting unscientific claims about their jade and rose quartz “vaginal eggs.”