This 21st-century manor channels the 18th century in several respects, most notably the abundance of wallpaper in several of its rooms.

Sign up for our weekly home and property newsletter, featuring homes for sale, neighborhood happenings, and more. 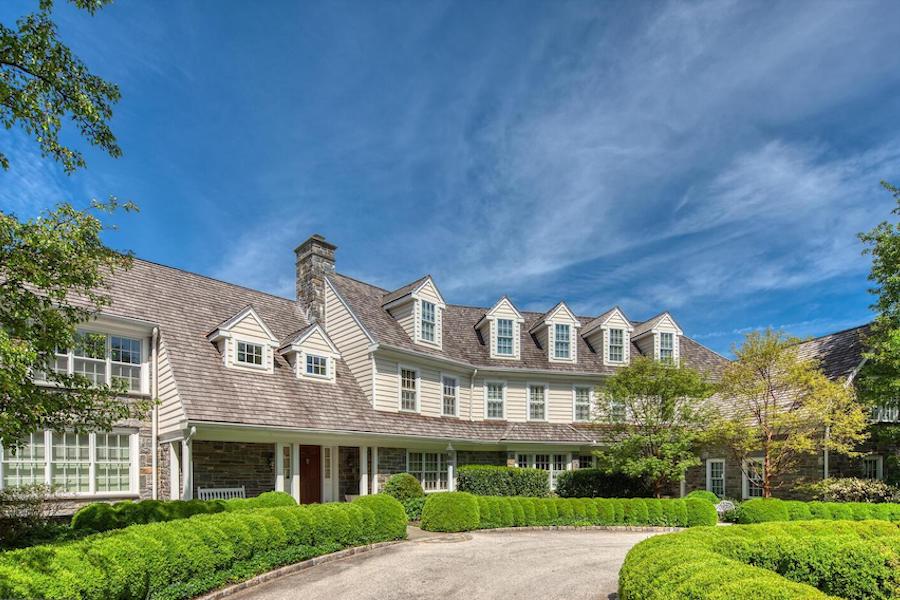 You might be forgiven for thinking you’ve arrived at a country club when you pull up to its front door. Yet this Colonial farmhouse on steroids gives you everything a country club offers but the golf course. It’s located at 1830 Aloha Lane, Gladwyne, Pa. 19035 | Bright MLS images via Compass

That’s because this Gladwyne Colonial farmhouse for sale by and large channels the spirit of Colonial America perfectly, including an element of Colonial manor house design largely abandoned today.

“By and large,” however, because it does have a number of distinctly 21st-century features. 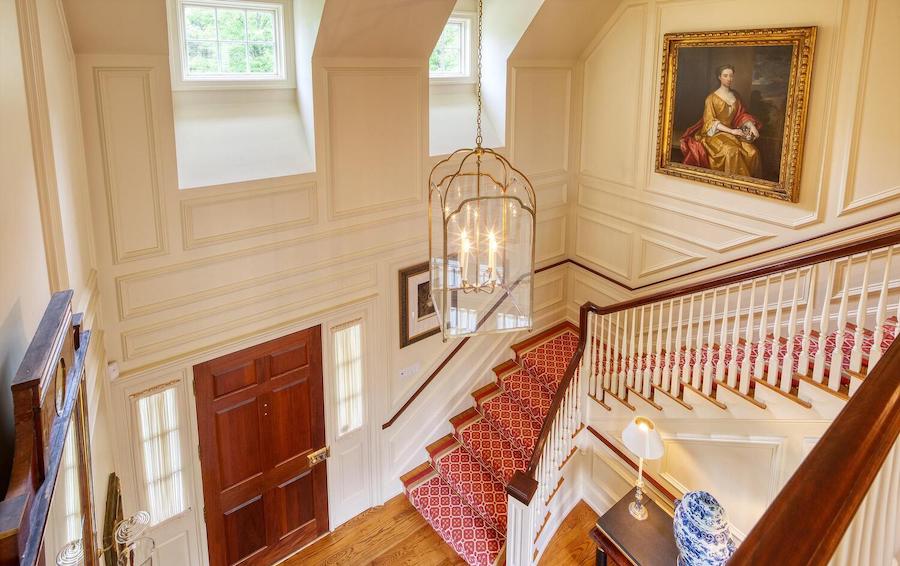 For another, the modest front door leads to a dramatic two-story foyer lit by the second-floor dormer windows. No Colonial farmhouse would have had such a grand entry.

Yet even though this house has rooms and dimensions more in line with those of a Georgian estate, it has an ambience more like that of a classic farmhouse. Modified to fit modern tastes, that is. 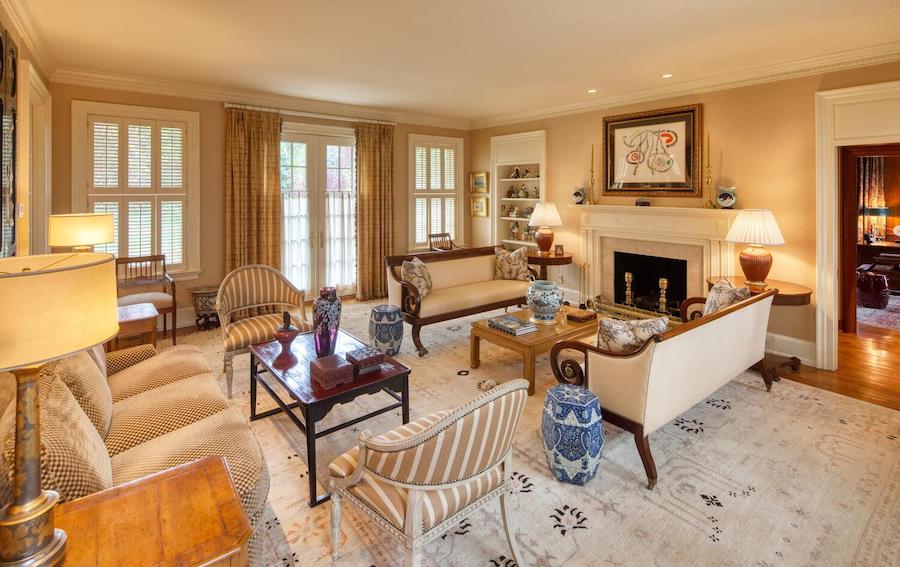 For one thing, once we achieve a certain level of suceess, we tend to want many rooms in which we can entertain, relax, or both. This house not only has a living room and great room, but it also has several dens.

Some of those dens have built-in bookcases, much as you’d find in an actual 18th-century house. 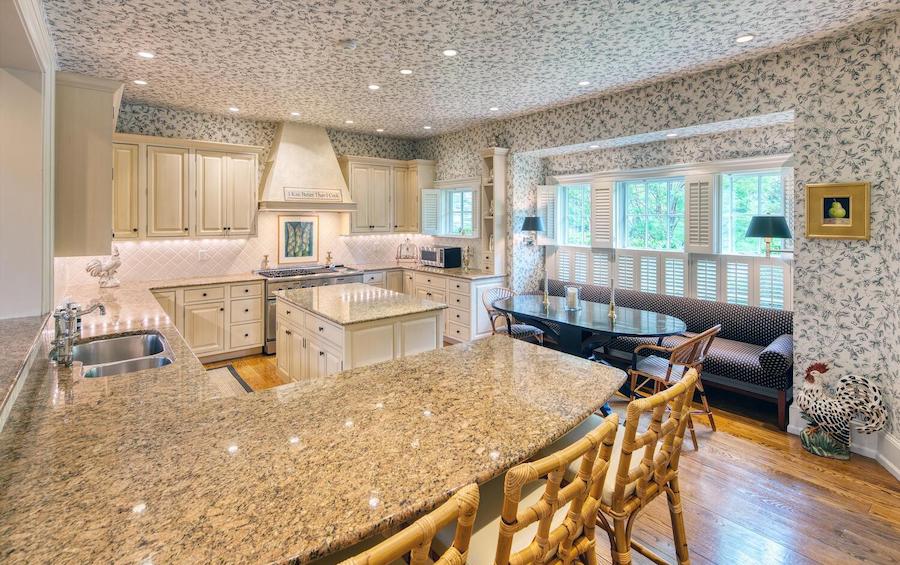 For another, we’ve come a long, long way from the hearth fireplace. Instead, we cook in expansive kitchens like this one that are equipped with appliances worthy of a professional chef. 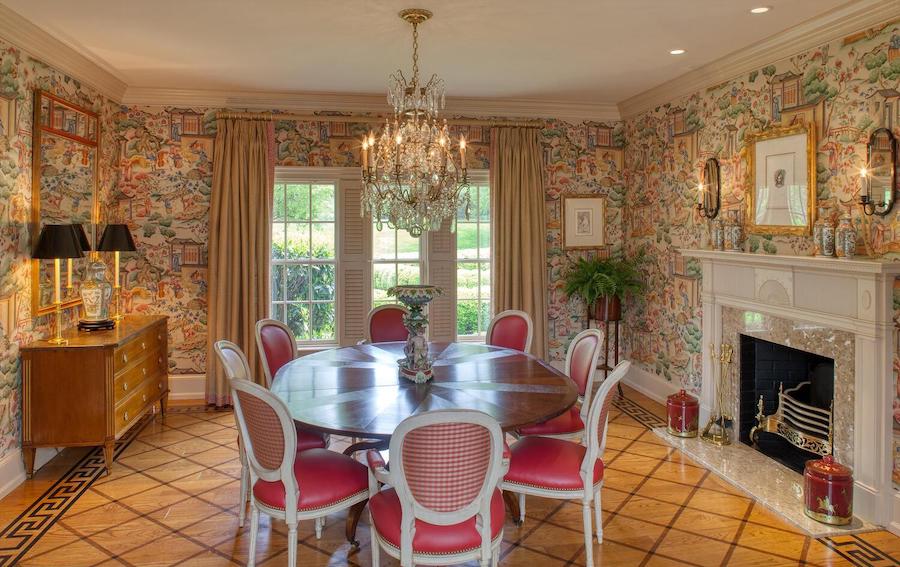 But you might note that both the kitchen and the formal dining room boast a decoration found in many 18th-century estates but in almost no newer houses: Wallpaper.

The dining-room wallpaper features a Chinese landscape pattern, and the decorative objects in the room complement the wallpaper. 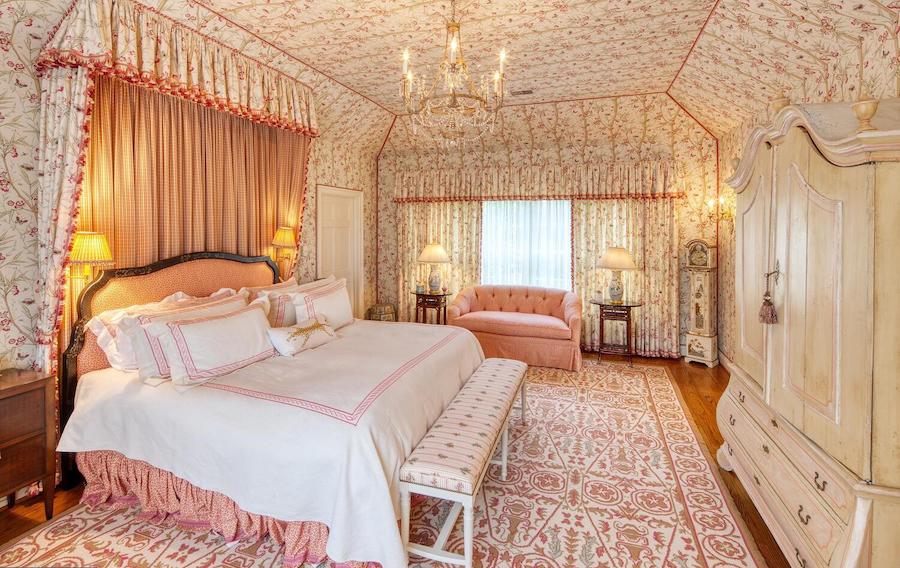 You’ll also find wallpaper in the primary bedroom, And as in the kitchen, it covers every surface but the floor. (Truth to tell, although the wallpaper here is authentically Colonial in character, I can’t help but think that Lilly Pulitzer came in at night and did her thing with it while the house was being built.) 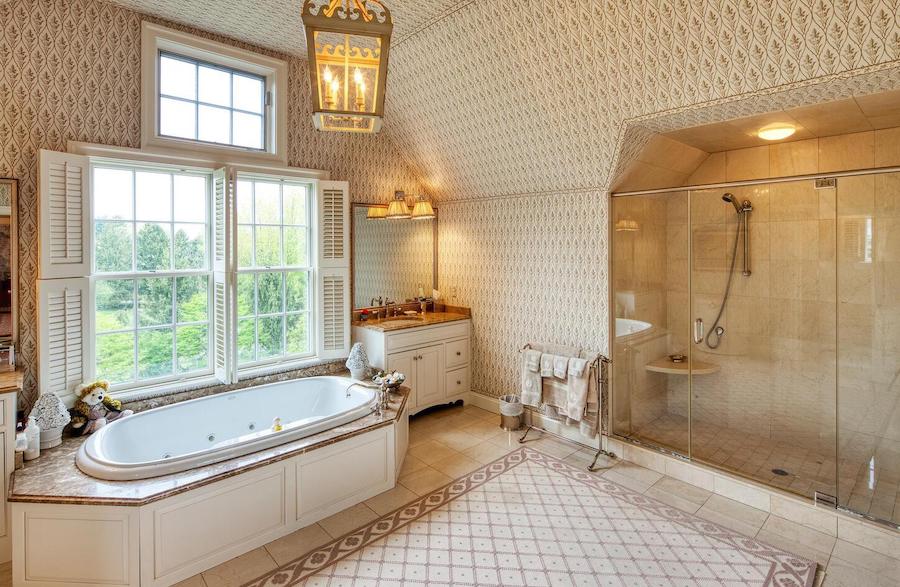 The primary suite’s bathroom is also more sumptuous than anything one might have used in the 19th century. And it’s all done up with wallpaper too. 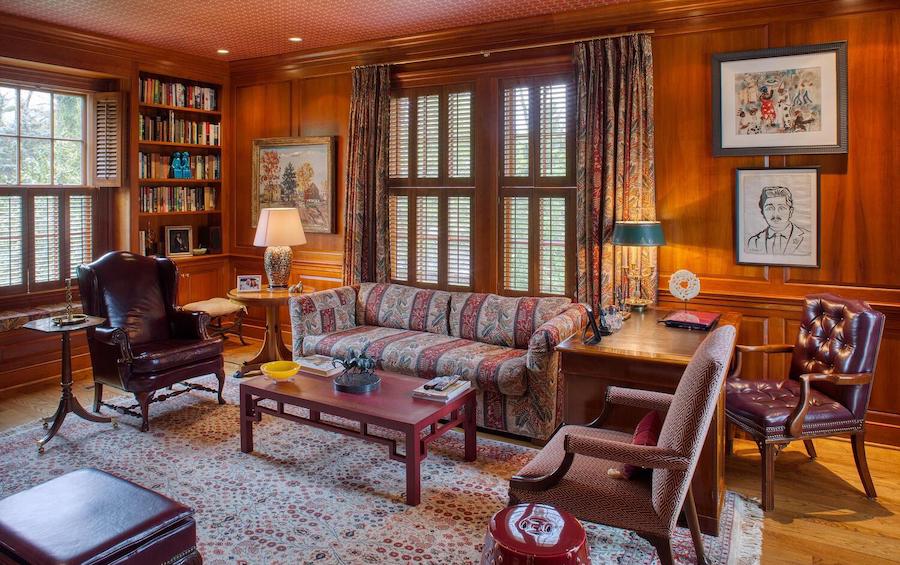 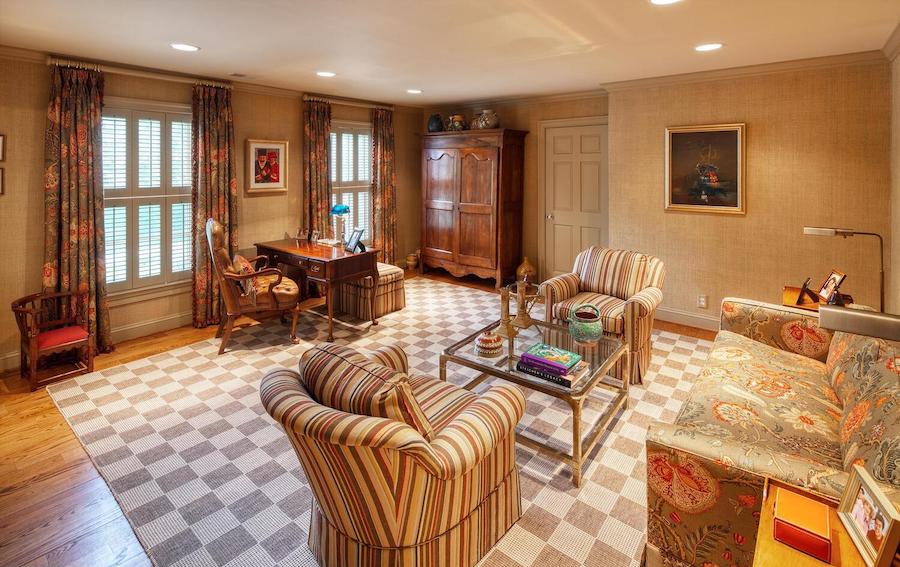 Though it was built in 2003, this house is well equipped for the work-from-home, socially-distant way many of us live today. It has a study, a library that could serve as a home office, and a third-floor bedroom suite whose sitting area could easily accommodate a desk. 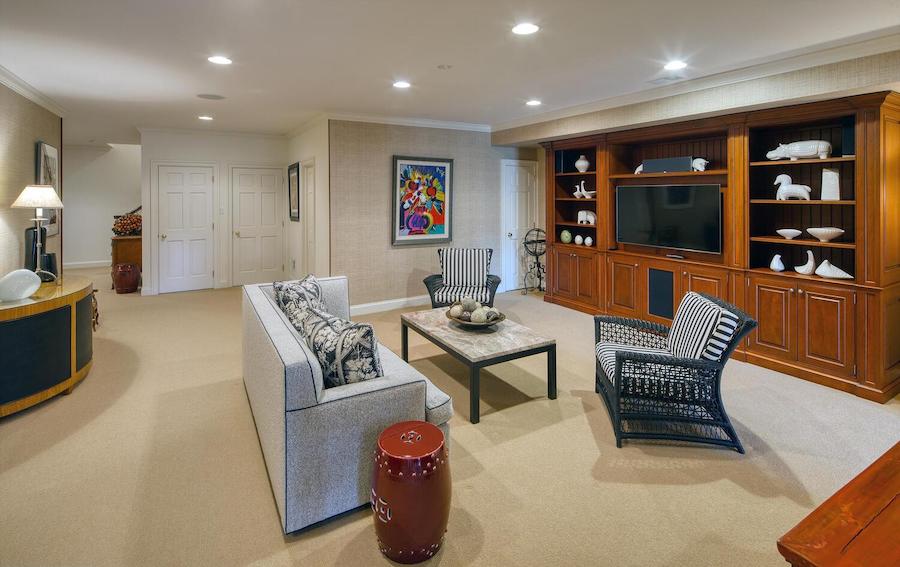 You could also easily outfit part of the fully finished basement as a home office, but chances are you might also want to keep it as the entertainment and exercise space it is now. Besides, if you worked down here, you might be tempted to knock off early and hang out at the full wet bar on this level. (There’s also a full wet bar on the third floor.) 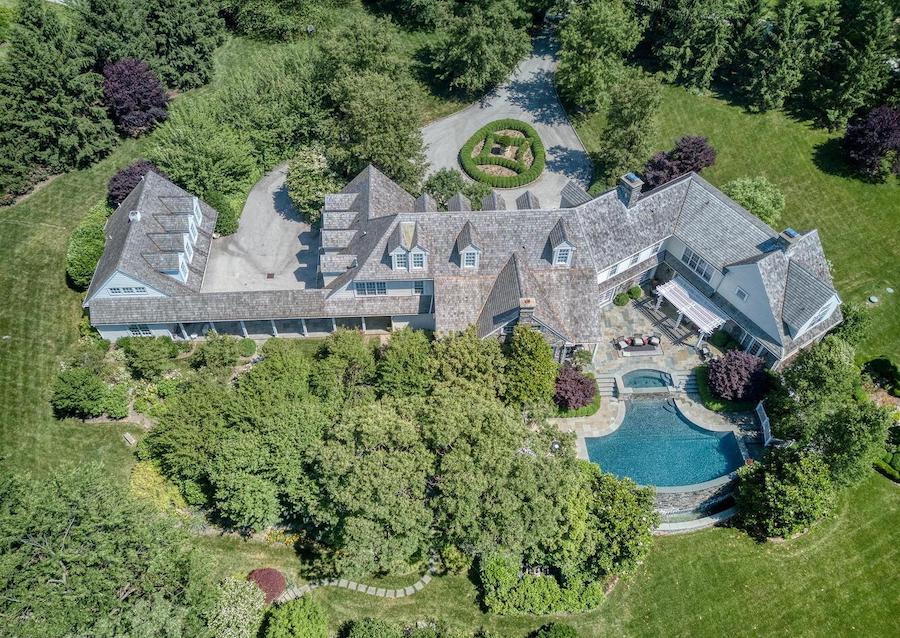 Its lushly landscaped lot includes a fieldstone patio that overlooks an infinity-edge pool that spills over a waterfall onto the terrace below.

In sum, this house is a Gladwyne-sized, Gladwyne-outfitted reinterpretation of a classic Colonial farmhouse. It takes you back in time while remaining totally present.