Rebuilt in 1598, this delightful Borders castle was revived by bursts of sensitive restoration in the 19th and 20th centuries, as John Martin Robinson explains. Photographs by Paul Highnam.

Ferniehirst Castle overlooks the Jed Water to the south of Jedburgh and once commanded the road from Edinburgh to Otterburn and Newcastle, a key invasion and marauding route. In its early days, it witnessed all the violence to be expected of a frontier fortress, but, today, it is a scene of tranquillity and peace, a monument to the cultural and economic blessings brought by the Union of the Crowns and their two ancient kingdoms. A succession of three castles has been recorded on this hillside site since the 15th century, but the site may have been first occupied as a forward stronghold, north of Hadrian’s Wall, by the Romans.

The medieval castle was founded by the Kerrs, a Borders clan reputedly descended from Vikings and recorded in Jedburgh Forest from the 12th century. By the 15th century, the family had two main branches, the Kerrs of Cessford (continued through the female line in the Duke of Roxburghe) and the Kerrs ‘of Ferniehirst’, so described by 1470, who are represented today in a direct male-line descent by the Marquess of Lothian as their clan chief.

Lord Ralph Kerr, the present laird of Ferniehirst, is the younger brother and heir presumptive of the 13th Marquess of Lothian, better known as the MP Michael Ancram, former chairman of the Conservative Party and Minister of State for Northern Ireland, who now sits in the House of Lords as a life peer. Lord Ralph’s wife, Marie-Claire, from a Fife family, is a leading portrait and landscape painter, several of whose works hang in the castle.

Ferniehurst was repeatedly damaged by fighting in the 16th century. It was occupied by the English in 1523 and then besieged by French allies of the Scots in 1549. They slaughtered the garrison, cutting them to pieces after they surrendered. 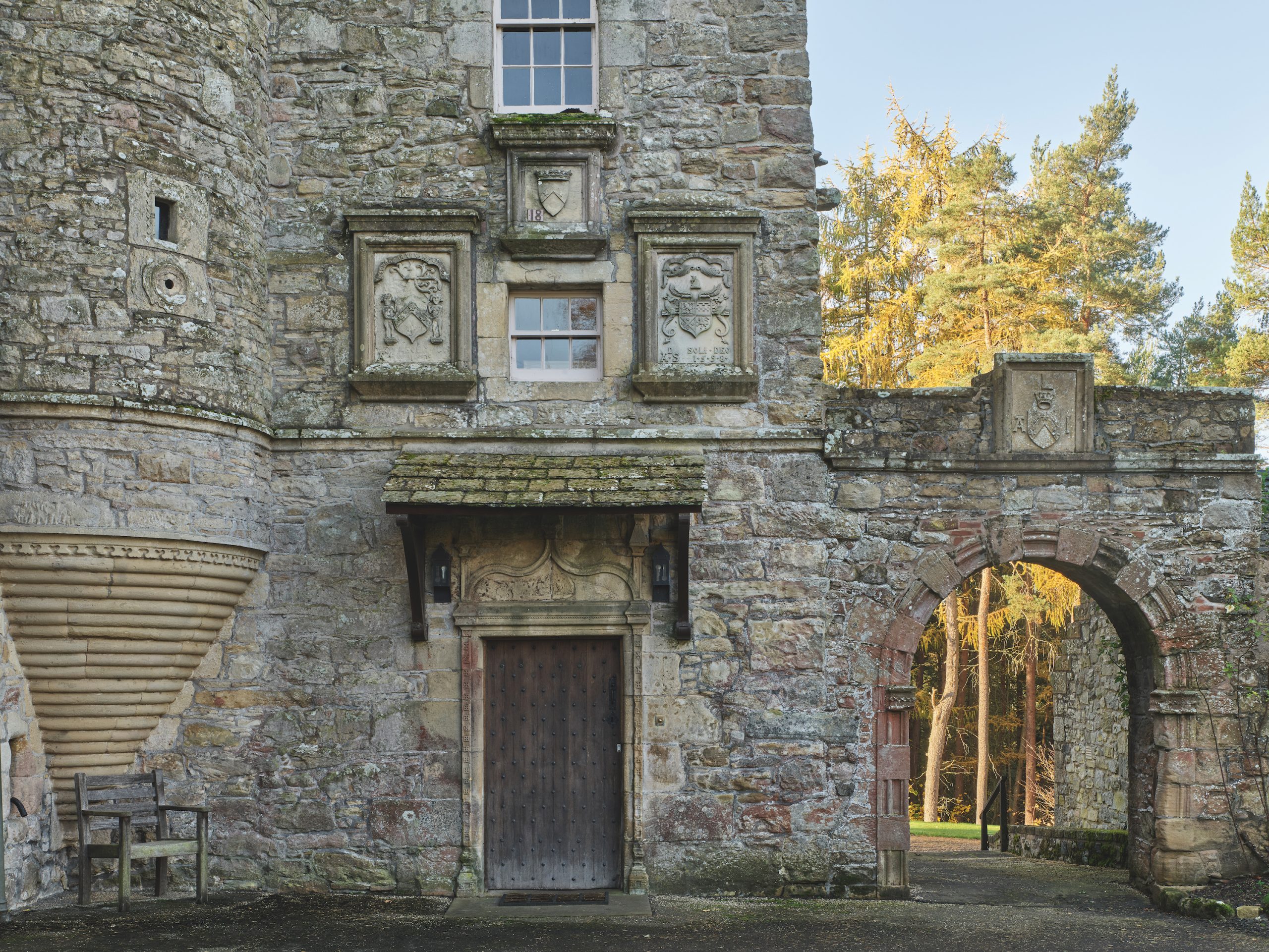 The entrance tower is decorated with heraldry. ©Paul Highnam for Country Life


The repaired castle was then attacked and burnt by the English in 1570. Re-roofed again, it was thrown down when James VI ordered its demolition on the grounds that the then Sir Thomas Kerr had succoured the rebellious Earl of Bothwell. Only the vaulted cellars survived this royal displeasure.

The present castle was erected on the ruins in 1598, five years after this official destruction. It was built by Sir Andrew Kerr, a Gentleman of the Bedchamber to the King, who was created 1st Lord Jedburgh in 1622. He made his peace with the King, and served at Court, as did his son.

The Kerrs rise to the ranks of the nobility followed the accession of the Stuarts to the English throne in 1603 and James I’s distribution of patronage to fellow Scots.

As rebuilt in 1598, Ferniehirst comprised a long two-storey range with a hall and chamber raised up above the medieval vaulted cellars. At opposite angles of the hall range were laid out a drum-shaped tower and a five-storey entrance tower. The latter has crow-stepped gable, decorative corner turrets and an entrance door elaborately ornamented with sculpture, including panels of heraldry. 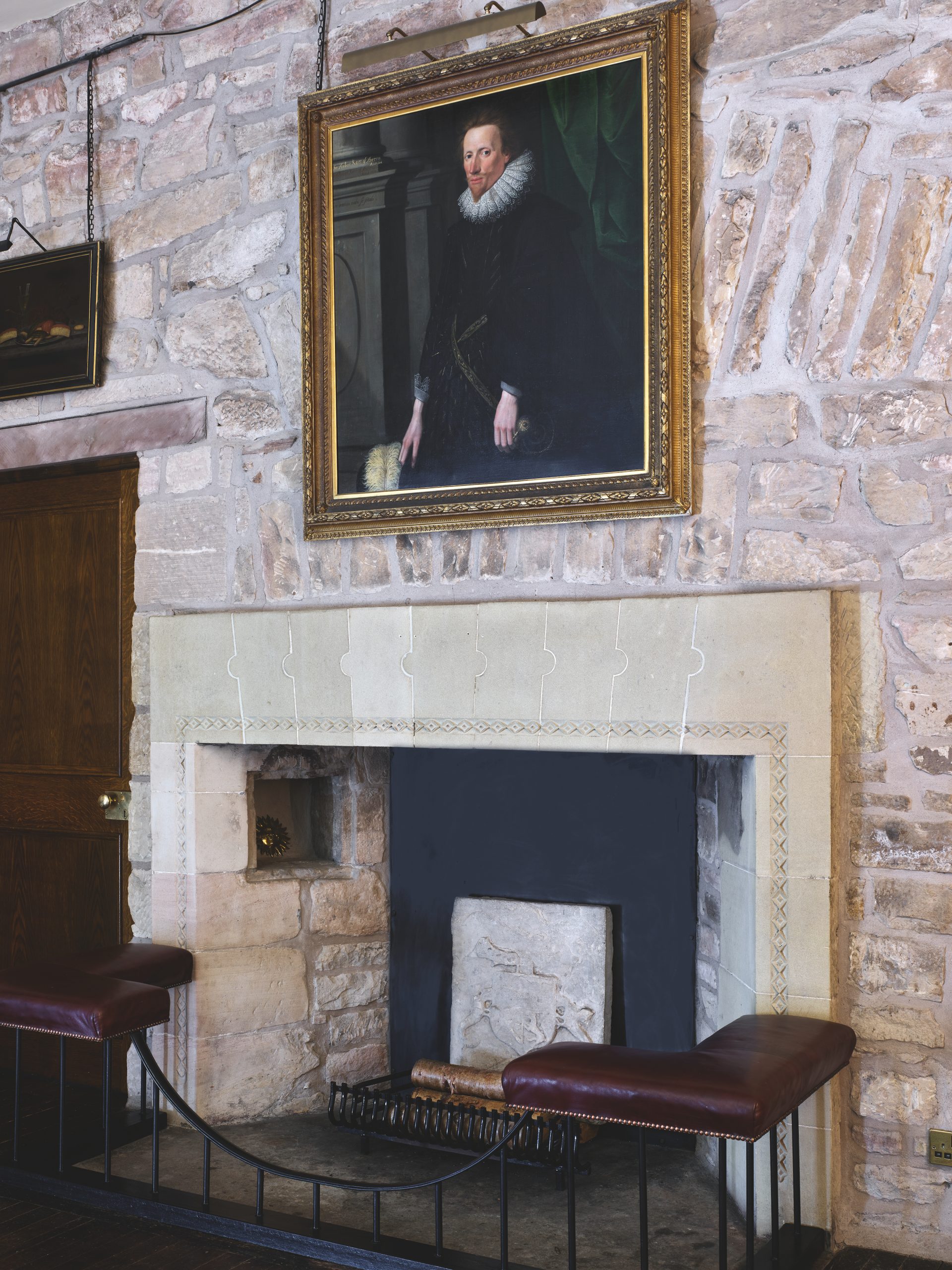 A portrait of the courtier and collector Robert, Earl of Ancram. ©Paul Highnam for Country Life

The main stair turret at its angle with the hall range overlooks the entrance and is also richly decorated. There was also a lower kitchen wing to the south-west, once thatched, but now slated, and a third wing projecting from the north-east. This has largely disappeared, leaving only low stone walls and a single archway.

Following the death of the 3rd Lord Jedburgh of Ferniehirst in 1692, the castle passed to cousins, the Ancram branch of the Kerrs, descended from Robert, later the 1st Earl of Ancram (1578–64). He had been succeeded by his son William Kerr, created Earl of Lothian in 1633 on his marriage to the de jure Countess of Lothian.

She was the great-granddaughter of Mark Kerr, Abbot and Commendator of Newbattle (or Newbottle) Abbey near Dalkeith, a property the abbot took over as his own at the Reformation when he became a Protestant. Newbattle Abbey thus became the principal Lothian house down to the earlier 20th century.

Robert, 3rd Earl of Lothian was raised to a marquessate in the Peerage of Scotland in 1701. The Kerrs, as did many Lowland clans, became Whigs and supported William of Orange against James II, and then the Hanoverians.

They were prominent soldiers in the 18th century: the 4th Marquess was a general and fought for the Duke of Cumberland at Fontenoy and later at Culloden, where he was Cumberland’s aide-de camp . As was Cumberland and the 10th Earl of Pembroke, a fellow officer in the Horse Guards, the Marquess was a patron of David Morier, the Anglo-Swiss painter of military subjects who settled in England in the 1740s, some of whose pictures survive in the Lothian collection. 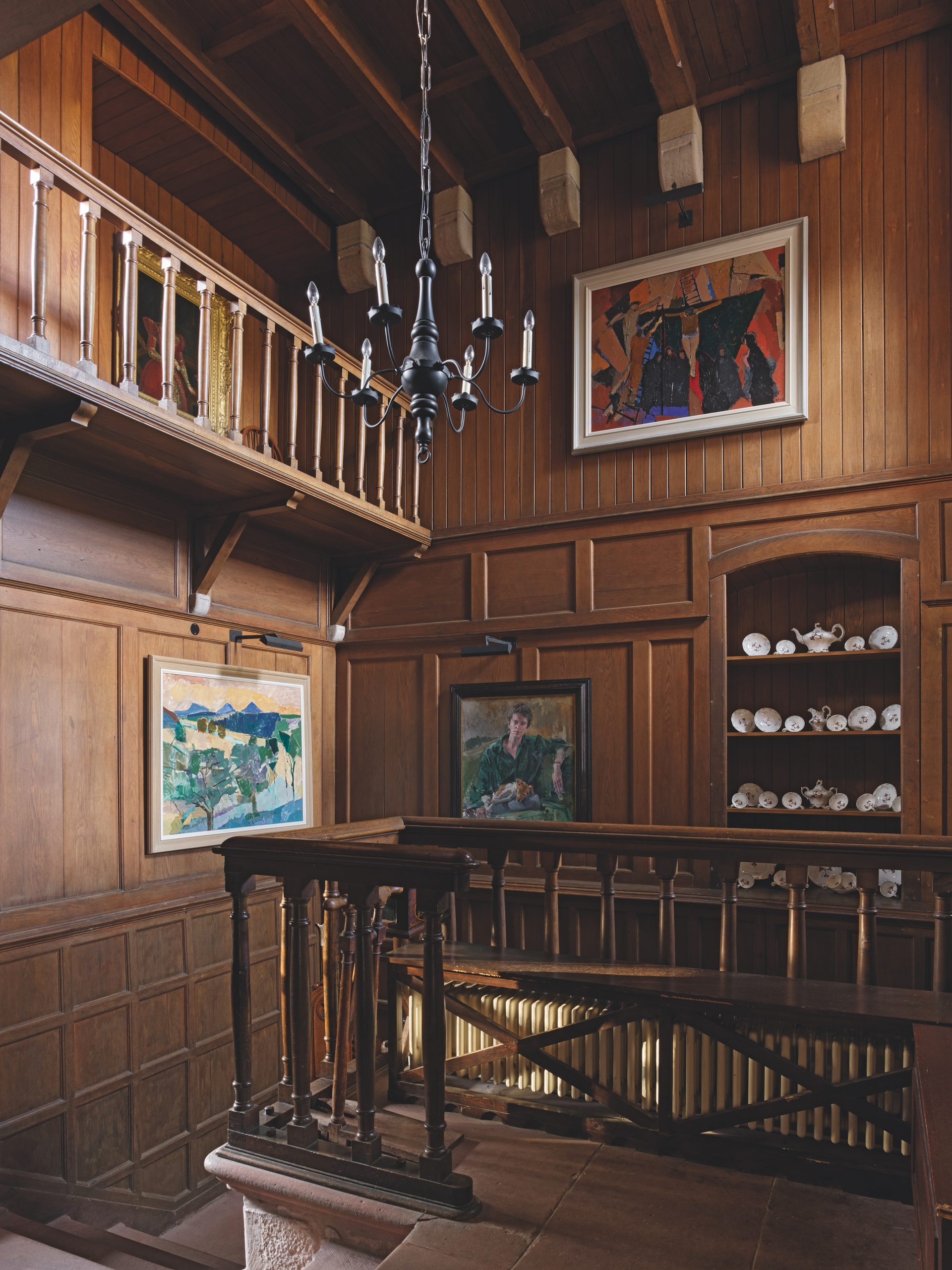 Ferniehirst was rarely occupied by the Lothian Kerrs in the 18th century, although it was kept in repair and some modernisation was done, including the addition of Georgian panelling and chimneypieces in the bedrooms and tall sashes in the central hall.

The 6th Marquess, who succeeded in 1815, embarked on a large new Jacobethan seat to the design of Edward Blore, expanding a small Georgian fishing lodge overlooking the River Teviot, five miles to the west of Jedburgh.

The Blore scheme was never finished, but Monteviot, in a beautiful setting, was enlarged and restored for the 12th Marquess by the architect Schomberg Scott, a cousin, in the 1950s. It has become the principal modern Lothian residence. Newbattle Abbey became an adult education college in 1936.

Although reduced to a minor role by the 19th century, Ferniehirst continued to be highly regarded as the original Kerr seat. A sensitive restoration in Arts-and-Crafts spirit was begun in 1887–90 by the eldest son of the 9th Marquess, Walter, Earl of Ancram. He sadly died in a shooting accident at Quideng in Australia, aged only 25, when aide-de-camp to the Governor of New South Wales.

The circular south-east turret containing the exceptional library chamber at Ferniehirst was repaired then, as attested by a datestone 1889. From 1935 to 1985, the castle was leased for 50 years to the Youth Hostel Association, which, as did many institutions, acquired large old houses in the 20th century without regard for the long-term maintenance or repair costs. 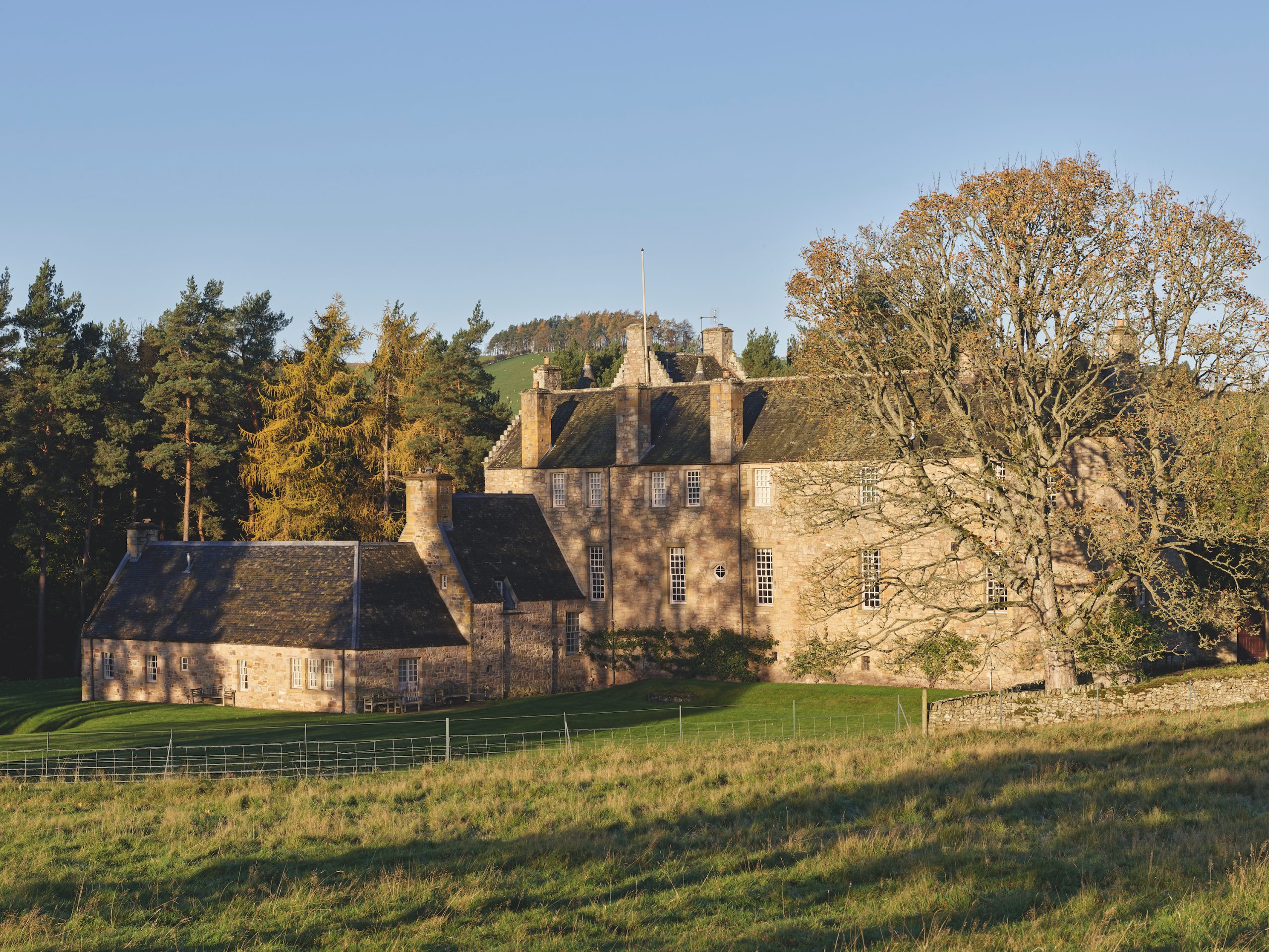 The 1930s disposal of Kerr houses, since reversed, makes an interesting footnote in economic and social history. As well as Ferniehirst becoming a Youth Hostel and Newbattle an educational institution, it also included the lease of Monteviot to an order of Catholic Missionaries and the outright gift of beautiful Jacobean Blickling Hall in Norfolk and its 5,000-acre estate (inherited from the Earls of Buckinghamshire) to the National Trust in 1940.

The policy of alienating historic properties for new social, educational and religious uses was the brainchild of the bachelor, Liberal, lapsed Catholic, Philip, 11th Marquess of Lothian. A brilliant but ‘nervy’ man, he found strength and philosophical support by becoming a Christian Scientist.

After Oxford, where he was the third Marquess of Lothian to take a first-class degree, he devoted himself to public life. He began his career as part of Milner’s ‘Kindergarten’ in South Africa until 1910, was Lloyd George’s Secretary at the Treaty of Versailles, Ramsay MacDonald’s Chancellor of the Duchy of Lancaster, and ended as British Ambassador in Washington, where he died in 1940, refusing medical treatment.

In the 1930s, he was a strong Appeaser of Germany, believing that the country had been badly treated by the French and Americans after the Armistice (not surrender) in 1918 and that the main threat to the West came from Stalin. He believed that country houses were an anachronism and was a strong force behind the National Trust Act in 1937, which paved the way for the semi-nationalisation of many country houses after the Second World War. 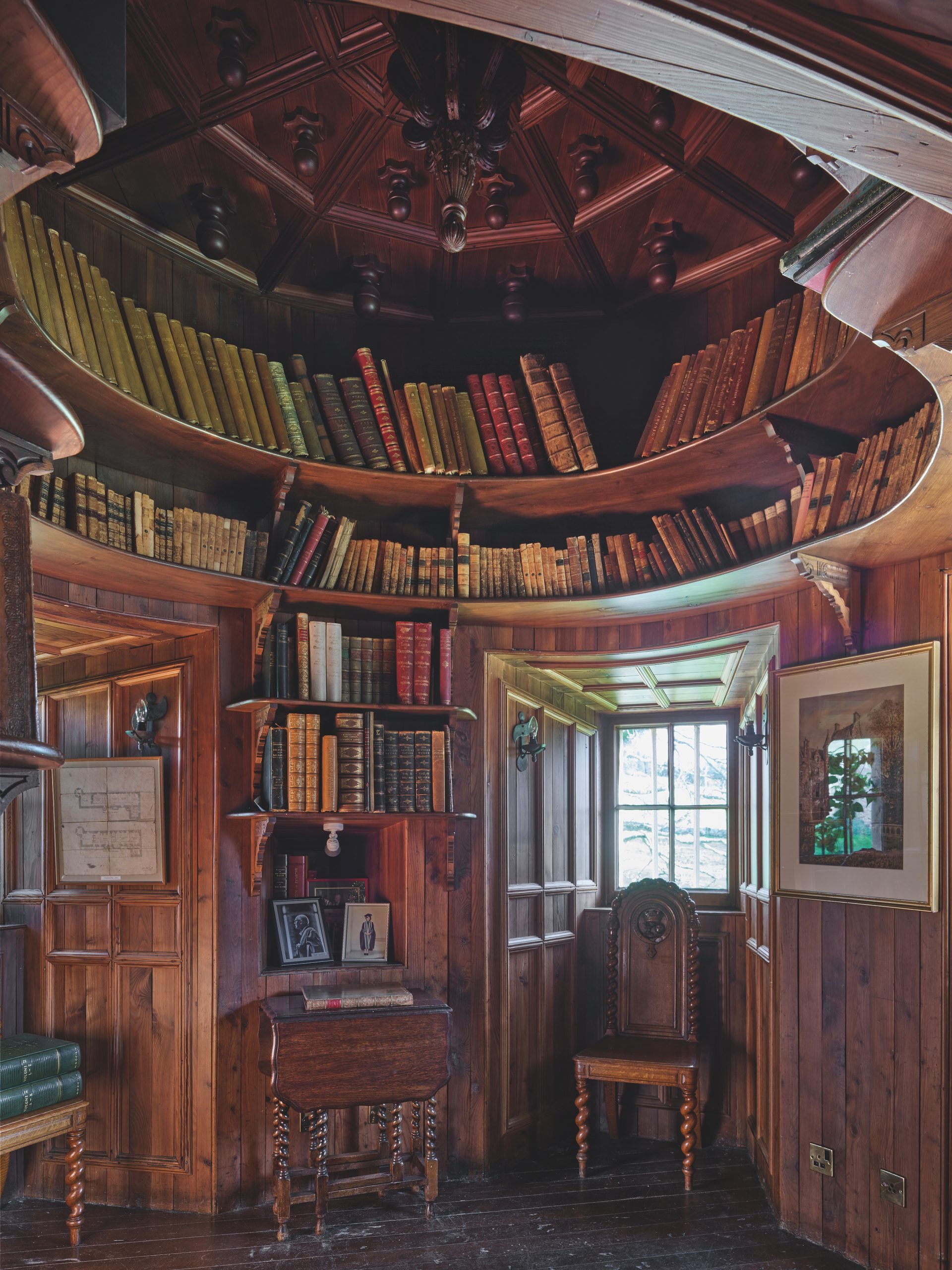 Fortunately, Philip’s cousin Peter, when he succeeded as 12th Marquess, and his wife, Antonella (neé Newland, a distant cousin), had very different and much more businesslike and positive views after 1945.

He served in the Scots Guards and later played an active role in the House of Lords, as Under Secretary at the Ministry of Health, then the Foreign Office, and became one of the first MEPs. He and Antonella, who had strong views on heritage, revived Monteviot and were able to retrieve heirloom furniture and paintings from Blickling and Newbattle.

Their work at Monteviot was one of the most interesting country-house revivals of the 1950s. In 1984, they decided to retrieve and restore Ferniehirst, too, after it had fallen into near ruinous condition and the YHA could not afford to repair it.

They moved there from Monteviot, which was handed on to the Ancrams a decade after Michael’s marriage to Jane, youngest daughter of Bernard, 16th Duke of Norfolk. The revival of the castle was very much the brainchild of Antonella, who made it into a family house once more and furnished it with appropriate furniture and the earlier family portraits illustrative of the 16th and 17th century Kerr history, leaving the 18th and 19th century portraits to carry on the story at Monteviot. 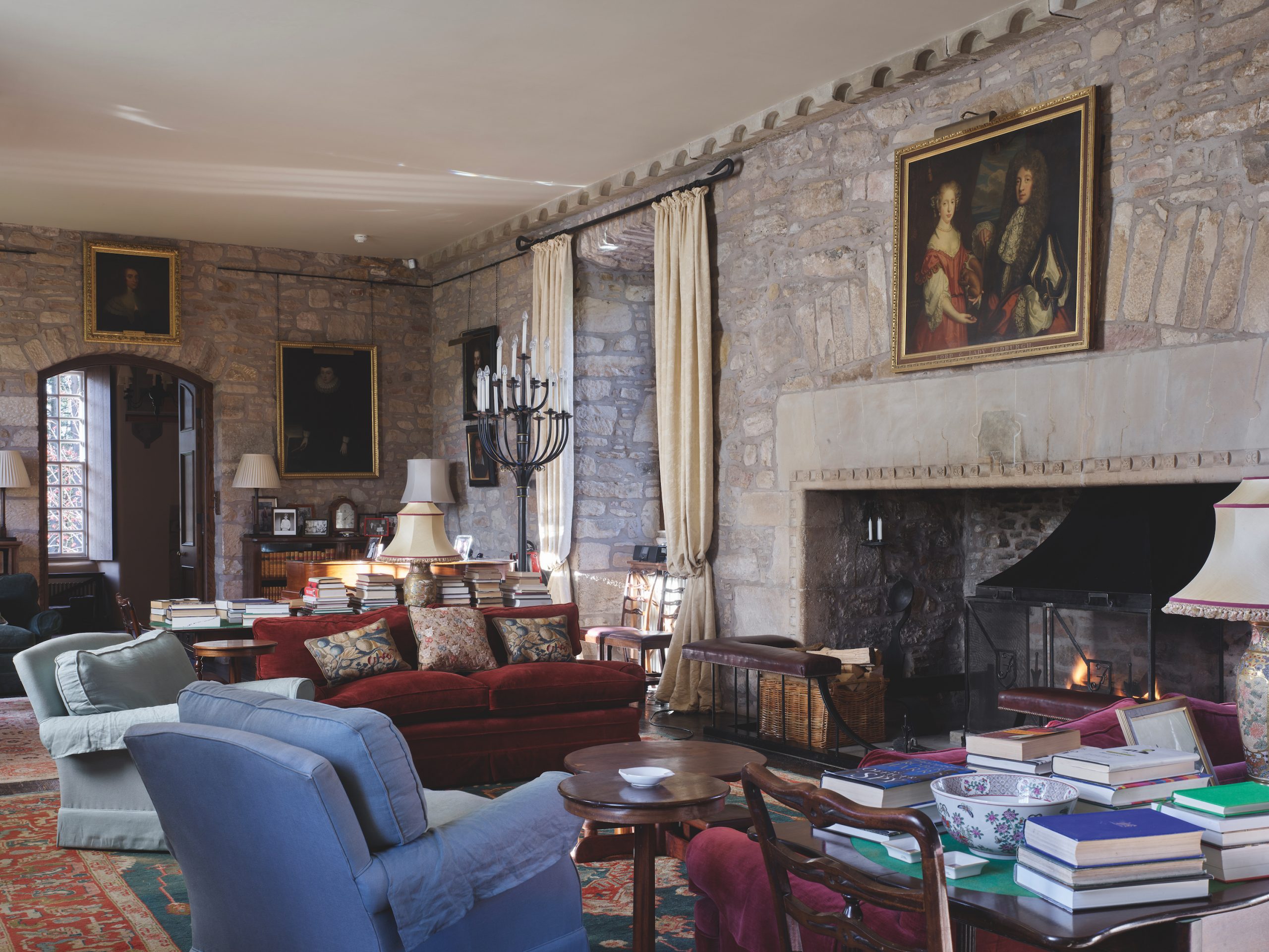 The Long Room, with the portrait of Lord and Lady Jedbergh. It comprises both a drawing room and dining room. ©Paul Highnam for Country Life

The architect for the restoration was James Simpson of Simpson & Brown, who collaborated closely with the Lothians. The work, which involved serious underpinning and re-roofing, was carried out between 1984 and 1988, under the direction of the estate Clerk of Works Ernie Smail, with the help of local craftsmen, all descendants of Borders families.

They included John Laidlaw & Sons, builders of Jedburgh, assisted by James Purdie & Son of Jedburgh; plumber, Bert Laidlaw; electricians (whose team included Roy Laidlaw, later rugby captain of Scotland); William Marjoribanks of St Boswells, slater; and J & J Tait of St Boswells. The ground-floor back wing nicknamed ‘Lady Lothian’s Bothy’ was initially thatched with Tay reeds by a Norfolk thatcher, but the covering had to be replaced with slate.

A Catholic chapel was formed in the medieval stone vaulted undercroft. The main rooms on the first floor are approached from the front door, with its datestone 1598, up a timber-banister staircase with stone steps, arranged left-handedly round an open well.

The family have a left-handed tradition (useful in fighting), referred to in Scotland as ‘corry-fisted’ or ‘Kerr-handed’, and Ferniehirst was designed for left-handed people to live in. At the top of the staircase is the Ante Room, with a decorative frieze painted in 1987 by David Wilkinson. This leads to the main living room of the house, which evokes a great hall. It is called the Long Room and is formed out of two pre-existing rooms, with two stone 16th-century fireplaces. 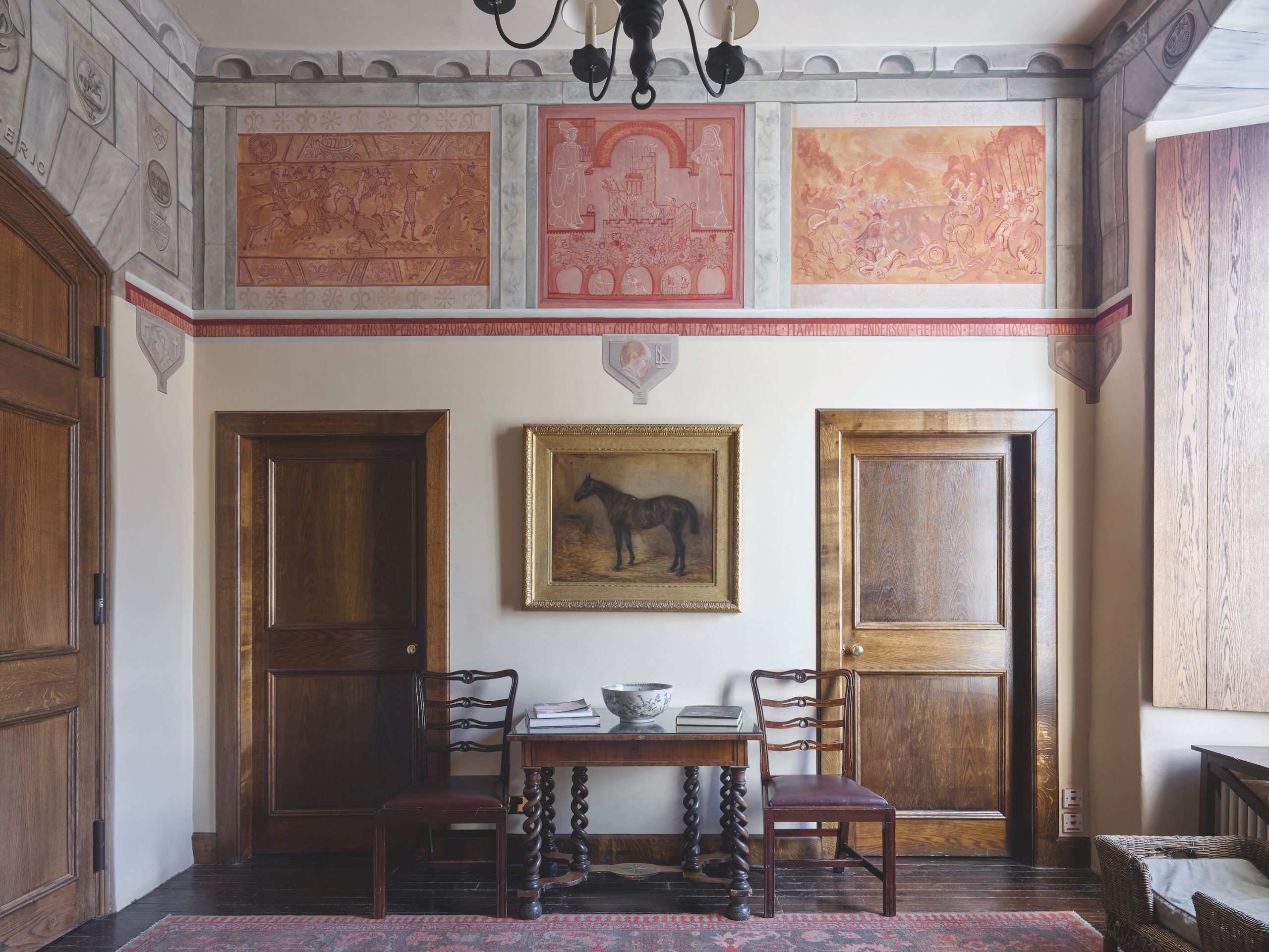 The decorative frieze in the anteroom was painted by David Wilkinson in 1987. ©Paul Highnam for Country Life

There is a dining room at one end and a sitting at the other. The walls are hung with family portraits, including those of Sir Thomas Kerr, Warden of the Marches, who was a strong supporter of Mary Queen of Scots and James I and VI, and his wife, Janet.

A splendid Baroque double portrait of Lord and Lady Jedburgh hangs over the chimneypiece in pride of place, commemorating Lord Jedburgh who, as Sir Andrew Kerr, built the house. The library in the circular tower is a beautiful retreat with its original shelves on brackets and circular ribbed timber ceiling, as well as a collection of books on Borders history.

In its architecture, decoration and contents, Ferniehirst is today a harmonious and civilised ensemble, redolent of six centuries of Scottish Borders life.

By the early 19th century, the library-living room had become an essential element of the country house. John Martin Robinson

An 18th-century beauty spot that briefly fell into complete neglect has been restored. John Goodall tells the remarkable story of

Which Industries Are Impacted The Most By Lumber Prices?