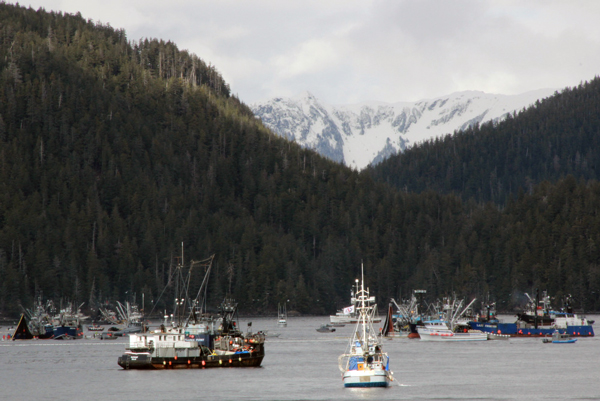 The appointment of Melvin Smith to the Commercial Fisheries Entry Commission comes with a six-figure salary.

The Commercial Fisheries Entry Commission is obscure to many Alaskans. But for those whose livelihoods are tied to fish, it’s a household name.

The agency was created in the 1970s after Alaska voters amended the state constitution to allow limits on the number of people allowed to fish — for the sake of conservation. Fishermen had to show a history of their catch in a particular area to get rights to fish.

“The commission spent many, many years going through those applications, sorting through the permits,” said Juneau attorney and former lobbyist Vance Fate Putman, who former Gov. Bill Walker appointed to the two-person commission in 2017.

That work of documenting who did and didn’t get fishing rights took decades, but it’s finally done. Over the past few years, the commission has resolved all but one dispute: an excess of eligible permit holders for a single shrimp pot fishery in Southeast.

The commission hasn’t created a new limited entry fishery since 2004. But Putman said there’s still work to be done: namely, facing what he calls “the optimal number question.” And that’s because the number of permits is largely based on historic participation.

His term expires in March. And so his successor, Melvin Smith, will likely take up that question. Until recently Smith worked for the Anchorage real estate office of a regional Native corporation.

He’s a low-key appointment: industry representatives say they don’t know him. He didn’t respond to requests for comments sent through the governor’s advisors.

Records show Smith has lived in False Pass, Wasilla and most recently Anchorage. His most recent commercial fishing permit was active in 2004. He’s held permits for land-based set nets in the Alaska Peninsula, purse seining and some longlining. His work email at Aleut Corporation bounced back, saying he’d left his job at the corporation last Friday.

The Governor’s Office didn’t announce the appointment. Nor was the vacancy advertised. His name only surfaced after it was transmitted on February 3 to the state Senate for consideration — appointments to the commission require a confirmation vote by lawmakers.

Asked about his qualifications, the governor’s spokesman released a one-sentence statement.

“Gov. Dunleavy selected Mr. Smith because he believes he is the best candidate for the seat on the CFEC,” wrote spokesman Jeff Turner in an email.

Fish politicos like former fisheries lobbyist Bob Thorstensen say it’s longtime practice for someone close or loyal to the governor’s inner circle to be tapped for the commissioner jobs, which come with six-figure salaries.

“Whoever gets that job is usually a pretty good friend of the governor’s people,” Thorstensen told CoastAlaska. “Because it’s a choice job.”

Thorstensen agrees with Putman that the commission’s next task is to right-size the number of permits in limited entry fisheries — and create new ones.

“There’s going to be a lot of buybacks and a lot of different types of moves,” Thorstensen said. “And there’s moves that need to be made for commercial fisheries.”

CFEC has been under pressure since a scathing 2015 audit that found inefficiencies, and Thorstensen said he takes exception to critics who argue the commission has worked itself out of a job.

“Those people just don’t have a lot of breadth or vision or depth,” he said. “Because CFEC’s job is far from done.”

Lawmakers proposed a bill in 2015 to merge the commission into the Department of Fish and Game. An executive compromise reduced the number of commissioners and cut salaries.

Melvin Smith may be unknown in fishing circles, but industry figures will soon be putting a face to the name. He’ll be addressing the United Fishermen of Alaska during this week’s annual meeting.