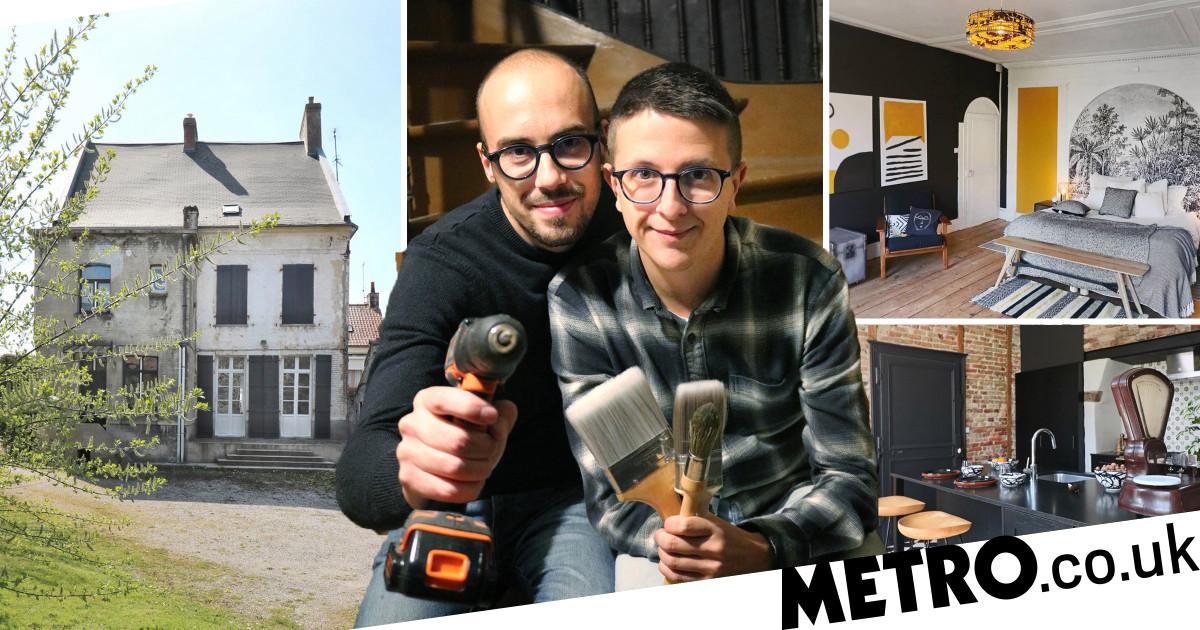 Lilian Gougeon and Valentin Richard, both 27 and from France, purchased the house in Saint-Omer, Pas-de-Calais in 2018.

The pair began the makeover in December that year and worked on their home for eight months before taking six months off, completing the rest of the renovation during lockdown.

With a budget of roughly €100,000 for the mammoth task, they’ve transformed the space into a colourful and modern version of its former self.

‘We were looking for a house with a lot of character and very quickly found this magnificent mansion, which we fell in love with,’ the couple told Jam Press.

‘There was a lot of work to be done to bring it up to date but we still embarked on this renovation project.’

There was a lot to be done, and the couple planned the interiors as well as some of the work themselves – although got some help for trickier aspects such as electricity, plumbing and window replacements.

Starting with the staircase, the couple stripped the plaster off the walls by hand and then removed the tiling on the floor.

For the kitchen, the couple added wooden furniture purchased from local craftsmen and painted these black to make the pieces stand out against the rustic brick wall.

Next up was the laundry room, where the pair replaced the old flooring and tiles on the walls, and installed plasterboards.

They painted the walls in a green shade and added white furniture to create a fresh and natural ambience to the room (€5,000 in total).

Additionally, they added a new bathroom to the mansion, which was previously an office – meaning they had to install a new plumbing system, roping in local contractors to help.

An existing bathroom hadn’t been touched since the 1950s – but has now seen a complete makeover too, after being thoroughly gutted.

The couple said: ‘We broke everything to redo everything; a concrete screed, tiling on the floor and on the walls, the creation of a washbasin cabinet, the installation of a shower and airing.

‘We have chosen a “spa” atmosphere in this room with black, ecru and turquoise tones.”

So far, Lilian and Valentin haven’t done much to their living room and dining room – but have plans to tackle these in the future.

And, although there’s still some tweaks to be made, the pair could not be more pleased with the result of their labours.

Lilian said: ‘The most enjoyable part of our renovation was clearly the fact of being able to project oneself.

‘We love creativity a lot and being able to imagine the decoration of a room throws us a lot: colours, furniture, decoration, lights.

‘The result suits us perfectly, it is exactly the type of atmosphere we envisioned when we started our project.

‘The only downside is the atmosphere in our living room, which does not live up to our expectations and which we will surely have a look at re-doing this the summer.’

They say the best piece of advice they have for someone looking to renovate is to just get started.

‘We didn’t know anything about renovation before we started and we trusted ourselves,’ the pair said.

‘You have to trust yourself and you can only be surprised by yourself!’

Cost breakdown for the renovation

Get in touch at [email protected]


MORE : The top 10 most Googled questions about going to the gym, answered by the experts

Get all the need-to-know property news, features and advice from Metro every week.

How to Decorate Above Kitchen Cabinets: 8 Great Ideas

The good, the bad and the bamboo | Cape May