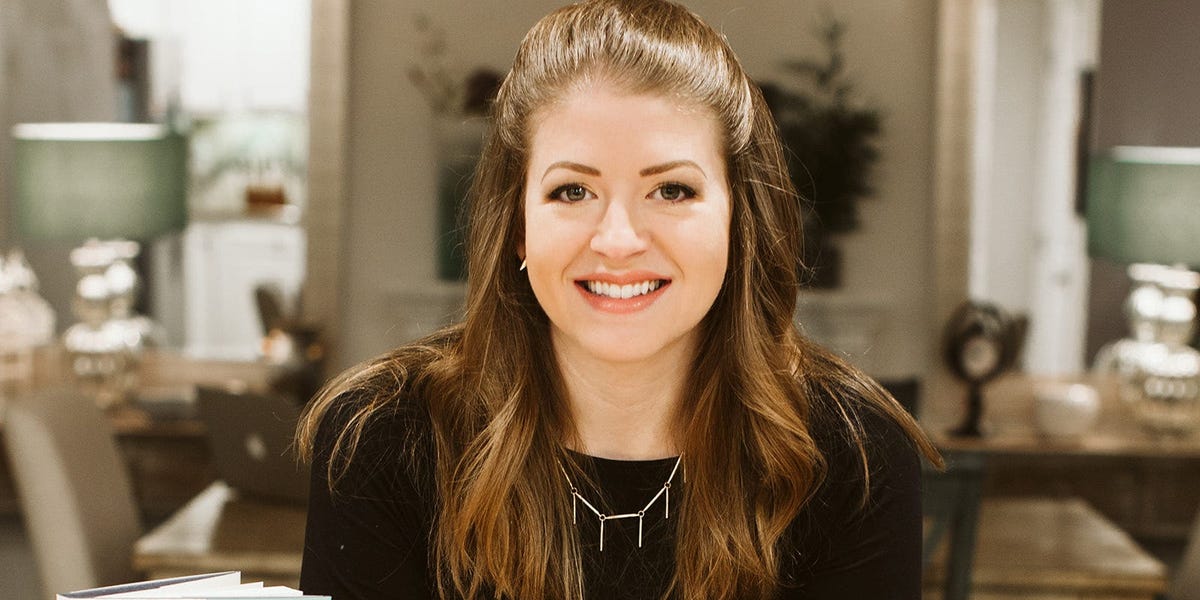 By the time she was 27, Rachel Richards was earning enough from her real-estate-centric side hustles to quit her day job as an analyst.

Financial freedom didn’t come easy for the couple. They spent the next few years saving as much as they could to funnel those funds into future investment properties.

“I’m not a trust-fund baby,” Richards told Insider. “I never made six figures from a job or a career, and my husband and I paid our way through school.”

Now at 28, she and Fazzone have grown that single duplex into a rental portfolio of nearly 40 units that brings in more than $10,000 in passive income every month. Richards, who left her 9-to-5 job as a senior financial analyst, has written two best-selling books. Most recently, she self-published “Passive Income, Aggressive Retirement: The Secret to Freedom, Flexibility, and Financial Independence.” Her other main passive income streams boost the couple’s intake up to more than $15,000 a month.

On an episode of the “Real Estate Rockstars” podcast, and in a follow-up interview with Insider, she broke down how she and Fazzone got to this point.

She built a portfolio of rentals

When Richards and her husband invested in the duplex, they were both working full time. Right away, she said on the podcast, it provided cash flow of $500 a month in rent from tenants. Now it brings in about $800 to $900 a month.

The duplex, Richards added, was the couple’s initial investment together, but they were already collecting rent from Fazzone’s first residence in Louisville. (The duo had moved into that home together but then decided to lease it out for the extra income.)

After buying that first duplex, the couple went on to acquire four more buildings over the next two years. They’re all in Louisville, which is Kentucky’s largest city and home to the state’s iconic Kentucky Derby.

In 2020, they moved from Louisville to Colorado Springs, Colorado. Instead of selling the single-family home in Louisville where they were living, they decided to rent it out — bringing the number of properties in their portfolio up to six.

Most of the tenants are families or single blue-collar workers, Richards said. And while their revenue is fairly stable, the couple did struggle to fill some of their empty units in the early months of the COVID-19 crisis.

“The pandemic was tough, especially in April 2020, and for a while we paused on even trying to fill vacancies because we didn’t want to put anyone at risk,” she said. But after they implemented virtual tours of the homes for rent, they were able restore their income stream by summertime.

She saved and cut costs to buy more properties

Richards and her husband built their real-estate portfolio over just two years — and there are a few reasons they were able to pull it off so quickly.

They didn’t have student-loan debt, which helped a lot, Richards said.

When they started investing, neither Richards nor Fazzone were taking home hefty paychecks. But shortly afterward, Fazzone, who works in cybersecurity, had his salary raised to six figures. And while Richards wasn’t making as much as a financial analyst at GE Appliances, they were able to save much of their combined income.

Richards said that they led a relatively frugal lifestyle to save as much as possible.

“We were trying to save about 50% of our income consistently. So we always tried to cook a lot, or drink water if we went out to eat, or be frugal in other areas,” she said. “I’m sort of into travel hacking, so I always found great deals on flights and accommodations whenever we did travel.”

They used their savings plus the rent revenue generated from earlier purchases to make down payments on future properties.

In addition, Richards got a real-estate license so that she could represent herself and Fazzone as the buyer’s agent in their transactions. The standard broker fee is Louisville, like most places, is 6%, paid by the seller. The buyer’s broker and the seller’s broker split it when the deal closes. Even if the couple fully depleted their savings to make a purchase, Richards said, she’d get a commission check for thousands of dollars at the closing — which they’d put toward the next down payment.

“Our savings rate, our lack of debt, the cash flow we were saving on top of that, and the commissions I was getting were how we came up with those huge down payments over and over again quickly,” she said.

She turned to publishing for more passive income

Richards’ two other main passive income sources are the royalties she collects on her two best-selling books and her eight-week prerecorded online course called “Get Your Financial S— Together,” which teaches people how to lower their expenses, save money, and invest it. On the website, people can pay $500 for the course, but Richards said she also offered a free starter kit that includes a discount.

In 2017, Richards, who is also a licensed financial advisor, wrote “Money Honey,” a book that breaks down financial advice in a simple and easy-to-understand way. Her Instagram account, @Moneyhoneyrachel, has almost 6,500 followers.

Then in 2019, she published “Passive Income, Aggressive Retirement: The Secret to Freedom, Flexibility, and Financial Independence.”

Richards’ main passive income sources add an average of $5,000 a month to her income. But in January, her books alone earned $10,000 in royalties, according to one of her Instagram posts.

She chose to quit her job to be a financial coach

Richards retired from her 9-to-5 job as a financial analyst when she was 27, but that doesn’t mean she’s sitting around.

“I now work because I want to, not because I have to,” Richards said. “My passion is truly teaching women and young millennials about financial literacy.”

Fazzone, meanwhile, continues to work in cybersecurity — a field he loves.

Richards advises others who aspire to build up a passive income stream to view the process as a safety net for turbulent times as well as an investment strategy.

“A lot of us think that having a sales-based job or a full-time salary job will provide us some type of income security or job stability,” Richards said. “But in reality, if you’re 100% dependent on a single source of income, there’s nothing secure about that. What happens if you lose your job, your hours get cut, you don’t sell as many houses as you wanted to this month? Then you’re really struggling.”

Richards advises new real-estate investors not to get discouraged when sourcing out properties to buy.