In normal times, new trends in home design and home decorating bubble up simply because it’s time for something different. A few years of bold color and homeowners start painting things gray. After enough minimalism, a hunger for plaids and florals comes roaring back.

But this time last year, a cultural experiment began that changed our relationships with houses and condos and apartments around the world.

Suddenly, constantly, we were inside them.

So much of public life — work, school, exercise, shopping, dining and (virtually) socializing — began happening entirely within the walls of home, at least for those able to do so.

Architects and interior designers say that after 12 months of varying degrees of lockdown, people are discovering what does and doesn’t work in their homes, and becoming more confident about acting on it. They’re realizing how familiar spaces can serve them better.

Amhad Freeman, founder of the Nashville, Tennessee-based Amhad Freeman Interiors, says clients now have time to really think about what they need from a room.

He recently helped convert an upstairs room into a multipurpose space where kids are “not afraid to jump around on the furniture.” The room has desks for schoolwork, but “it’s more of a lounge now, so that they can do a lot of different things instead of just focusing on the computer,” he says.

Another client hired Freeman to redesign an unused home office into an elegant, in-house cocktail bar.

Hafsa Burt, founder of hb+a Architects in California, has helped convert garages into gyms, and storage space into home offices or playrooms.

Cini recently helped a family in Florida transform their garage into a gaming room by adding LCD screens, track lighting, rugs and a row of gaming chairs spaced safely apart. With the garage door open and a screen door added, there’s enough air circulation and space to safely invite friends over, she says. 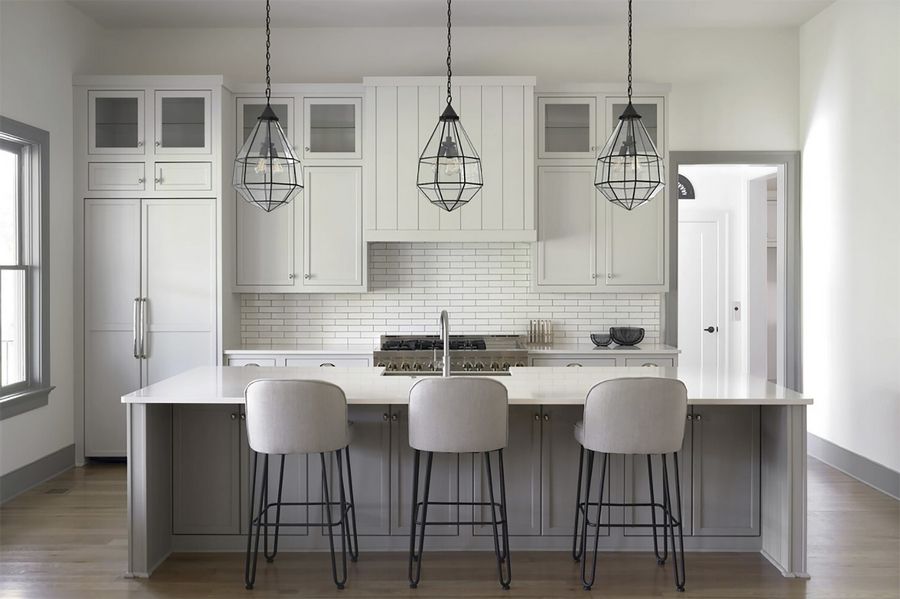 Amhad Freeman, founder of the Nashville, Tennessee-based Amhad Freeman Interiors, designed this kitchen. He says clients now have time to really think about what they need from a room.
– Courtesy of Nicholas McGinn Jr./Associated Press

Homes with open plans and sprawling “great rooms” became popular in recent decades as welcome communal gathering spaces. But that preference for open layouts may be waning.

Now that whole families are working and schooling at home together (and might, to some degree, for years to come), “you have to have the kind of boundaries where you can step away,” Cini says.

A home divided into separate spaces “helps a family to be able to decentralize and not be on top of each other,” she says. This becomes even more important when elderly relatives join a household.

As an expert in multigenerational living, Cini has been “getting calls nonstop” from people wanting to safely welcome an elderly parent into their home.

One way that people are making this happen, Burt says: Rather than building an addition onto their home, they’re getting a permit to build a backyard ADU (additional dwelling unit). These tiny houses give extended family members their own space and yet everyone has easy access to one another.

In commercial spaces, air quality has been a top priority since the pandemic began. It’s also becoming important to people at home, Burt says, as is water quality: At this year’s virtual Kitchen & Bath Industry Show, panelists spoke about the growing interest in built-in water purification systems for kitchens.

People are also cooking more than ever before, Freeman says, and many of his clients are using money they’re not spending on travel and restaurant meals to invest in serious kitchen renovations.

“Budgets of kitchens for me have almost doubled,” he says, with clients swapping out 30-inch cooking ranges for 60-inch models and adding luxuries like built-in coffee stations. Homes with open plans and sprawling “great rooms” became popular in recent decades as welcome communal gathering spaces. But that preference for open layouts may be waning.
– Courtesy of Doug Birnbaum/Associated Press

Those working and schooling at home on Wi-Fi-dependent devices are noticing that they’re consuming more energy, so energy efficiency is becoming a priority.

“People are driven by what they see on their energy bills,” Burt says.

Adding insulation and swapping out inefficient appliances saves money, but it also has the added benefit of helping the environment, she says: “People are thinking about their habits and wondering how it’s contributing to the greater good for the planet.”

Beyond that, with plenty of time to sort through attics and closets, we’re clearing out things we don’t need, Cini says, and thinking more carefully about what we want to own.

We’re consciously filling our homes with things that make us happy, Freeman says. Rather than hurrying to decorate a room, his clients “want to actually take time to buy things that are beautiful, that are well made.”

They’re going to be spending a lot of time looking at their surroundings, he says, so “they want to be able to appreciate that furniture.”